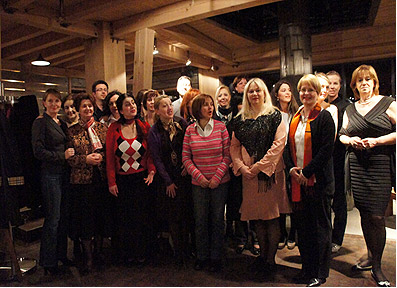 It was an unprecedented event that took place from 30 March to 1 April 2012 in the mountains of Jahorina in Hotel Termag. The AWJ retreat brought together 25 members including two men from all over BiH. The key objective of the retreat was to strengthen the Association and its members through advancing the concept of gender and the importance of gender in the judiciary, and by providing a unique opportunity for networking and sharing of experiences.

Several speakers, including H.E. Vibeke Villoe, the Norwegian Ambassador to BiH, the Director of the Gender Equality Agency, Samra Filipović-Hadžiabdić and professor at the faculty of philosophy of the University of Banja Luka Milena Karapetrović, as well as collaborators of DCAF and the Atlantic Initiative contributed with sessions and presentations. Several of the interesting and engaging debates took place, such as: How does gender influence the dynamics in the courtroom and how can judges, prosecutors and other court staff ensure gender bias free courtrooms and proceedings? How has feminism and gender equality developed in B&H? Why are women judges in BiH not perceived as leaders? What does civil society expect from the judiciary and why is public trust in the BiH judiciary rather low? What can the AWJ do to effectively strengthen the role of women judges and increase role of women in the judiciary?