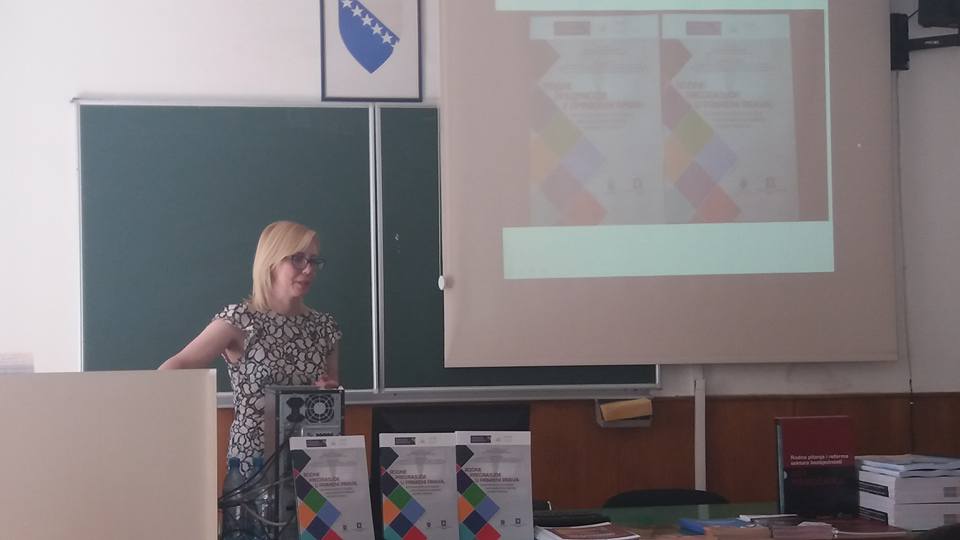 SARAJEVO – On 18 May 2017, promotion of the new publication of the Atlantic Initiative and DCAF entitled “Gender Bias and the Law: legal frameworks and practice from Bosnia & Herzegovina and beyond” was organized at the Faculty of Law, University of Sarajevo.

The presentation and the seminar were attended by 2nd and 3rd year students.

Professor Jasna Bakšić-Muftić also addressed students and emphasized the importance of understanding gender bias in the implementation of law.

PALE – Before a full conference room of the Faculty of Law, University of East Sarajevo on 19 May 2017 the Atlantic Initiative and DCAF held the fourth seminar and promotion of the handbook “Gender Bias and the Law: legal frameworks and practice from Bosnia & Herzegovina and beyond”

Dr Majda Halilović from the Atlantic Initiative, Svetozar Bajić, judge of the Basic Court in Banjaluka and Professor Goran Marković, deputy dean for scientific-research work of the Faculty of Law spoke at the event. The speakers emphasized the importance of studying gender equality and gender bias issues that come up in the application of law.

Present guests and students were welcomed by the dean of the Faculty of Law in East Sarajevo, Professor Radomir Lukić.

The Head of the Research Department of the Atlantic Initiative, Dr Majda Halilović presented the handbook, noting that it can also be found at the library of the Faculty of Law. The handbook includes extensive material, information, theoretic considerations and practical examples of gender bias in various branches of law, and the analysis of legal solutions and caselaw in Bosnia and Herzegovina, as well as the practice of European courts. Judge Svetozar Bajić spoke about the most common forms of gender bias in the application of law, analyzing examples from his practice, and addressed the importance of training of judges under the Gender and Justice project. Professor Marković addressed the issue of achieving gender equality from constitutional and legal aspects, and spoke about exercising the right to work and employment based rights.

Teachers, collaborators and students of the Faculty of Law, University of East Sarajevo who expressed great interest in this topic participated in the seminar.

The handbook comprises of ten thematic units that provide national and international legal frameworks and practice, analysis of literature and numerous examples of gender bias manifestations in the application of law in civil and criminal cases. A group of university professors of law worked on the handbook development, with the support of Swedish and Norwegian embassies in Bosnia and Herzegovina, and OPDAT office of the United States of America Embassy.