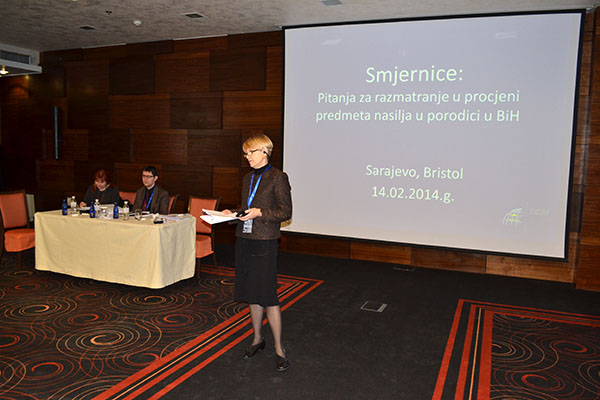 Cooperation between the Judicial and Prosecutorial Training Center of the Federation of BiH, DCAF, and the Atlantic Initiative, brought about a workshop on “Responses to Violence: Considerations for Domestic Violence Case Evaluation in BiH” on February 14, 2014 in Sarajevo. Judge Maureen McKnight, from the State of Oregon in the US, and Judge Adisa Zahiragić, of the Cantonal Court in Sarajevo, were trainers at the workshop.

Judge Zahiragić presented the Benchbook, Considerations for Domestic Violence Case Evaluation in BiH, the first of its kind in the country, prepared by judges, for judges. Presentation of the Benchbook stimulated a discussion on mitigating and aggravating factors in domestic violence cases and on the role of judges in preventing and combating domestic violence in a broader context.

The participants then engaged in practical work in small groups, each of which worked on a single case scenario in order to identify and resolve each case and rule on it. Groups then presented their cases from the perspectives of a prosecutor, defense counsel, and a judge. The goal of the exercise was to practically apply the Benchbook, with a special focus on the evaluation of mitigating and aggravating factors.