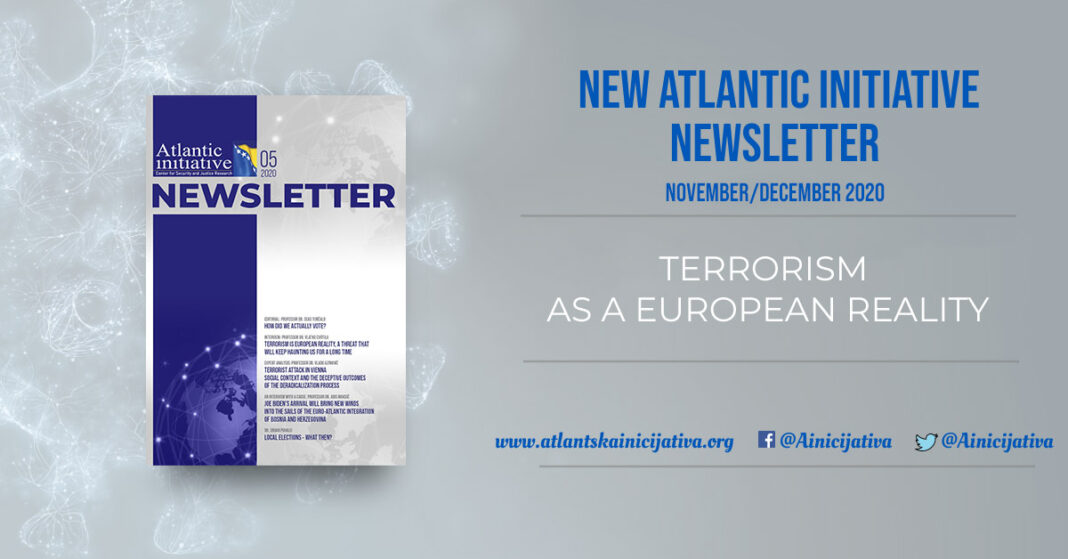 The latest issue of the Atlantic Initiative Newsletter is dedicated to the challenges of terrorism and radicalism in Europe.

Cvrtila sees terrorism as a European reality, a threat that will keep haunting us for a long time yet. He warns about the danger of labelling an entire culture and religion as terrorist, and points to the radicalizing effect of such a political narrative.

Following the most recent terrorist attack in Vienna, professor Azinovic considers the importance of social context and the potential for deceptive outcomes in deradicalization processes.

Professor Adis Maksic from Burch University discusses the US election result and its echoes in Bosnia and Herzegovina and the Balkans.

Also in this issue, Dr Srdjan Puhalo analyses the results of the local elections in Bosnia and Herzegovina, focusing on strategically important local areas, and those – such as Bihać – that were in the public eye because of the migration crisis.

Puhalo considers: how did we actually vote in these local elections? Initial commentary characterized the election outcome as indicating a decrease in the level of power and influence of dominant political parties among Bosniak and Serb electorates, and victory for progressive candidates.

But is that the case?

‘Such an analysis of the results is not entirely accurate for two reasons. Firstly, the data processed so far by the Central Election Commission shows a decreased level of support for the Party of Democratic Action (SDA) and the Croatian Democratic Community (HDZ), but also growing support for the Union of Independent Social Democrats (SNSD), despite the fact that this party lost the strategically important city of Banja Luka.’, Prof. Dr Sead Turčalo concludes.

The Newsletter is available at this link.