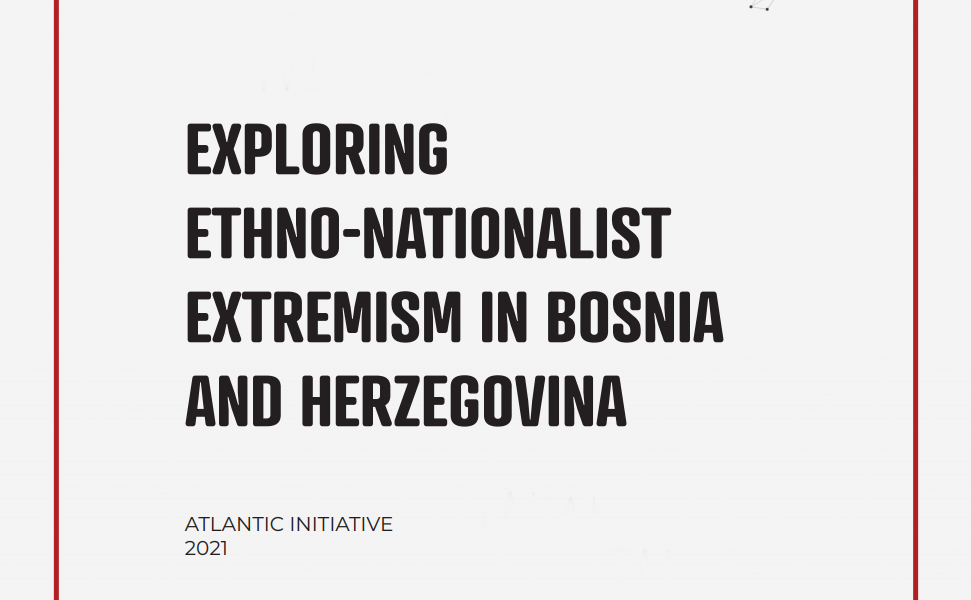 Atlantic Initiative presents the results of research on ethno-nationalist extremism in Bosnia and Herzegovina and, while it reveals some worrying trends, which cut across gender and age categories, the research does also highlight some opportunities.

Demonstration of extreme ethno-nationalist views ranges from the readiness of participants to support their “ideals” only at a rhetorical level, through to a readiness to justify and directly support acts of violence or to commit acts of violence themselves. However, the research also indicates where the potential lies for building resilience to extremism. There is a strong indication that respondents who had more interactions with people from other ethnic/identity groups were much less likely to support violence, even though they harbour very strong ethno-nationalist views and were recognised as extremists in their communities. This research also indicates how the promotion of nationalism by political parties in BiH provides a “key concept” and “main framework” for ethnonationalist extremism. It further points to some paradoxes and tendencies in the development of illiberal democracy – processes which, on the one hand, indicate greater trust in strong leadership, while at the same time weakening trust in formal state institutions. It is this trend – alongside the consensus of most respondents regarding corruption, organized crime and politicians – that represents the most serious security threat in BiH. This is the most alarming part of the study’s findings, which call for broader social action and the involvement of all internal sectors – from politicians, intellectuals and public figures to the media and international organizations – to preserve the most important values of pluralism and democracy.

You can read the publication at this link.

Eschewing the usual distinctions between the country’s three separate constituent peoples—Bosniak, Serb and Croat—that underpin most research in Bosnia and Herzegovina (BiH), the Atlantic Initiative has in this report shown how ethno-nationalist extremists from all three groups are much more similar than different. One key point in their report is the discussion and analysis of attitudes towards violence; the authors show that, among other factors, low levels of education, dissatisfaction with life circumstances, perceived religiosity (regardless of religion) and resistance to reconciliation or relationships across different ethnic groups are correlated with acceptance or support of violence. As countries around the world face an increasing threat from right-wing extremism, findings like these are of critical importance for researchers and policymakers.

Importantly, we learn from this report about how the mainstream in BiH enables the extremes: ethnic differences are reinforced and strengthened by mainstream ethno-nationalist political parties who benefit from division over unity. We learn how these same parties lay the foundations, intentionally or not, for more extreme and even violent versions of ethno-nationalism. But we also learn, for example, that support for gender equality and expressing conciliatory attitudes towards different ethnic groups (e.g., supporting relationships between members of different ethnic groups) is correlated with *less* acceptance or support of violence, a finding with implications for our broader understandings of violent extremism. As well, the report reveals that a dangerous mix of attitudes that can be seen across Europe and beyond is laying a foundation for so-called “illiberal democracy” in BiH—citizens distrusting their nation’s political institutions while simultaneously believing in the need for strong leadership.

In all, this report highlights the need to confront ethno-nationalist extremist ideas and the groups and personalities that promote them from becoming accepted and normalized—a challenge facing not just Bosnia, but the Balkans and beyond.

This study represents an important new step towards detecting threatening trends that have the potential to seriously endanger the fragile tissue of BiH society and the state. The relevance and scientific nature of this research is confirmed by the findings of the authors, which correspond to previous research of similar scope, such as a person’s personal status, economic stability and education, and cognitive and psychological abilities.

Particularly important findings of this study are the parts that address the psychological profiles and behaviour of people based on their personal lifestyles, levels of happiness or sociability, which in BiH are somewhat different from European patterns. When it comes to religion, its important role in forming attitudes about others and violent extremism has been recognized in this research. The analysis of data in this research most comprehensively covered the influence of religion in the formation and acceptance of ethnonationalist views, where the authors Halilović and Veljan spotted different dimensions of commitment, interpretation and understanding of religion in respondents. In the context of the religious factor, it is very important that this study was determined neutrally and impartially according to the phenomenon of religiosity, considering the previous dominance of research that focused on Islamist extremism based on radical and extreme interpretations of Islam. Given the nature and manifestations of right-wing and ethno-nationalist extremism and its ideological sources in different religious traditions, both in BiH, the wider region and Europe in general, this approach will be an important step and incentive for other researchers to shed light on radical interpretations and abuses of Orthodox and Catholic Christian traditions and their harnessing and incorporation into ethnonationalist and far-right narratives and views.

Finally, the key findings of this study, which identified the interconnections of the far-right spectrum, political parties and religious officials, and warned that corruption, organized criminals and politicians pose the most serious security threat in BiH, are an alarming call for action by all relevant actors. communities communities.