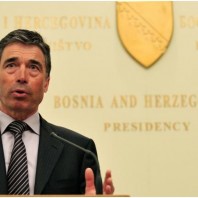 The country is more divided than any time since 1995. Time to call for reinforcements.

Bosnia and Herzegovina’s future looks more uncertain than it has at any time since the end of the war in 1995. The nation’s three main groups — the Bosniaks, Serbs, and Croats — are all competing to determine the future of the Bosnian state. The country will hold general elections in October, and if that were not destabilizing enough, its various constituencies are all running in opposite directions: Serbs are threatening to call a referendum on the Dayton Agreement that stopped the war; Croats are calling for the creation of an autonomous entity within the broader state; and Bosnian Muslims are demanding a new constitution giving them more powers, to replace the existing, highly decentralized document. Forming a coalition government after the October polls will be very difficult, no matter who wins. On top of the political crisis, the country is in the midst of an economic and social meltdown.

Paradoxically, this is precisely the time for NATO to forge a closer alliance with Bosnia, a process that began last Thursday in Tallinn, Estonia. A meeting of the alliance’s foreign ministers agreed to give Bosnia and Herzegovina a Membership Action Plan (MAP) — a welcome step toward maintain the country’s tenuous hold on peace and stability. A MAP is not a promise of NATO membership; it does not commit the alliance to defend Bosnia against a military threat or affect its decision-making mechanisms. It is an assistance program through which NATO and its members provide guidance and support on specific political, economic, security, and legal reforms. That is exactly what Bosnia needs at such a tense moment, in part to reassure its various political factions and in part to help push forward badly needed reform.

Until now, U.S. and EU attempts to help Bosnia and Herzegovina by pushing for constitutional changes to make the government more functional have come to naught; no one on the ground is ready to take difficult steps. What’s needed is a common agenda of projects that would benefit all Bosnians, without upsetting the country’s delicate balance of power and the three communities’ individual, vital interests. But Bosnian politicians today lack the common interests and shared values that would be necessary to improve upon what they agreed to in the Dayton Accords. Trying to change the current arrangement would be divisive and time-consuming.

A closer link to NATO can help build up this common sense of purpose and calm things at home. Much of the current tension in Bosnia exists because all parties feel insecure about the future structure of the Bosnian state and their status within it. Having a MAP with NATO can give all sides a sense of security, making them more confident about undertaking necessary institutional changes, even when politically difficult. With NATO’s help, reform can also be gradual; Macedonia has been in the MAP program since 1999 and is now ready to start accession talks with the European Union.

Even amongst Bosnian Serbs, the group least in favor of moving closer to NATO, public support for membership hovers at 35 percent — higher than it was in Montenegro when that country received a MAP in December 2009. Even Serb leader Milorad Dodik, who has proven a difficult partner with other parts of the international community, is in favor of NATO membership for Bosnia. To be sure, more nationalist Serb politicians may rally against it, given NATO’s bombing of Serbia in 1999. But this is unlikely to have much effect, particularly since Serbia, to which the Bosnian Serbs are closely linked, is also moving closer to NATO.

If reform does happen, it will only work if it is designed by and for all Bosnian constituent peoples: Bosniaks, Serbs, and Croats. MAP is vital for Bosnia because it leaves the initiative and ownership of the reform process in Bosnian leaders’ hands. It differs from the international impositions of the past decade and a half, undertaken by the Office of the High Representative (OHR) on a wide range of issues — from establishing common license plates to extending the mandate of international judges working to investigate war crimes. Too often, Bosnian leaders have hidden behind the OHR to avoid taking hard decisions. This time, the country’s leaders must stop asking when someone is going to come to rescue them and start doing the hard work themselves. Left to their own devices, Bosnia’s leaders can do the right thing, as they did these past few months by passing new laws to obtain substantial IMF assistance and visa facilitation with the European Union. Still, positive change in Bosnia will only be incremental, and the NATO meeting in Tallinn is a good first step.

The first test for Bosnian leadership will come even before day one of this new NATO engagement. Bosnian leaders have already been told that their MAP will formally begin only when the military bases identified as necessary for future defence purposes have been officially registered as the national property of the Bosnian state — not as the separate property of one of the country’s two entities, the Federation or the Republika Srpska. Until now, the latter enclave has held tightly to its control over the bases on its territory — part of a broader dispute with the federal state. It won’t be easy to convince Republika Srpska to give up its turf, but the lure of NATO ties will go a long way.

If the country slides through another bitter election without good news, its already fledgling commitment to both NATO and to its own reforms may well fracture and collapse. If deadlock continues after the elections, it could become impossible for a new government, which inevitably must include a fair mix of Bosniaks, Serbs, and Croats, to form, leaving the state government-less or worse. The stakes are high — which is why now is the right moment for Bosnia and NATO to deepen ties.

Gen. Wesley Clark, former NATO Supreme Allied Commander, is a board member at Crisis Group and a senior fellow at the UCLA Burkle Center.