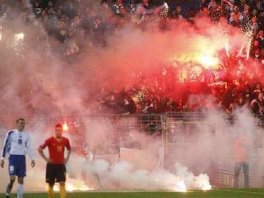 Sport hooliganism as a threat to security in BiH

The term “sport hooliganism” represents a group of people that cause damage and pain to another group of people. If we reduce this definition to an empirical level, we get to discrimination and the violation of freedom towards anyone that “gets in the way” of the hooligans, the endangerment of life and health of people and of communal goods.

Hooliganism is present on sport fields around the world, and is a topic of sociological and psychological examination in Europe and throughout the world. From the psychosocial point of view, these social groups are very dangerous because of the phenomenon of collective (ir)responsibility. Therefore, in a group, everyone feels safe to do everything others do, no matter how destructive and illegal it may be, because there is no feeling of responsibility. On the contrary, horrible crimes can be committed in the name of a group, without anyone feeling responsible. This was proven true many times throughout history.

Unfortunately, recently we were witness to hooliganism at football stadiums in Bosnia and Herzegovina. Three matches have drawn the attention of the general public and required a massive police intervention. First, in Banja Luka a match between Borac and Željezničar was aborted, then a few days after that in Mostar, there was another interrupted match between Zrinjski and Velež, and a friendly match between Željo and Hajduk was not even played because of a fierce “supporters” clash. In all events, creators of the chaos that spilled over onto the city streets were hooligans, hiding behind the supporter groups. In an eruption of violence, dozens of injuries and large material damage was reported, and fear has spread widely. It was pure luck that there were no casualties.

These events initiated the Government of Federation of BiH to state that it is ready to work on a legislative to prevent supporters’ riots, in collaboration with the Council of Ministers of BiH and the authorities in Republika Srpska. The legislative should be implemented on a state level, or for a start, at least on an entity level. Meetings with the administration of the Football Association of BiH and the Committee for Normalization of FA BiH were announced. One of the initial measures brought after the recent outburst of violence is prohibition of attending away matches for supporters.

It seems that the police has learned its lesson too. The Director of Federal Police Department (FPD) Dragan Lukač held, on 10th October, a meeting in Sarajevo with chiefs of Sectors of Uniformed Police from all 11 police departments, on which it was agreed to start working on a strategic operative plan for police behavior in Federation of BiH on riot prevention and security of sporting events. A team for the creation of a strategic operative plan was formed, consisting of the chiefs of Sectors of Uniformed Police of FPD, Police Department of Canton Sarajevo, HN Canton, West Herzegovina Canton, Ze-Do Canton and Tuzla Canton. A deadline for the creation of the plan was set for 31st October.

A day later, the Chief of European Union Police Mission (EUPM), Stefan Feller and the Minister of Internal Affairs of Federation of BiH, Predrag Kurteš, discussed this topic on a meeting in Sarajevo. Feller supported the initiative to create a strategy for prevention of violence at sporting events, and Kurteš stated that the lack of legislature on the prevention of riots at sporting events on a state level obstructs the work of police in this area.

In Bosnia and Herzegovina, hooliganism has a special tone because it is intertwined with nationalism. The collective memory of people in these areas, provoke some extremely negative emotions. Sometimes with disastrous consequences, when human lives are lost. Supporter groups refuse to take responsibility for the incidents their members commit, and the incidents are rising in number.

From a sociological aspect, these occurrences are extremely dangerous, especially for the youth, who are taught to hate – in segregated schools, in organizations where fascism is an ideal, in political parties, in the media, at sporting events…Evil and hatred towards one another and difference is promoted this way, and this cannot be tolerated at all.

Although the reaction of political elites always comes late, after the problem has surfaced already, it is commendable that they recognized this as a problem that, for more than one reason, should be given a priority in solving. And there is a solution. France, for example, has banned seven supporter groups for the purpose of preventing and decreasing the incidents on stadiums. Extreme measures are necessary for extreme types of hooliganism, especially if they are connected with hate speech and very dangerous kinds of violence. Bosnia and Herzegovina should, in accordance with that, have extreme punishments for the violators, with a principle of zero-tolerance.