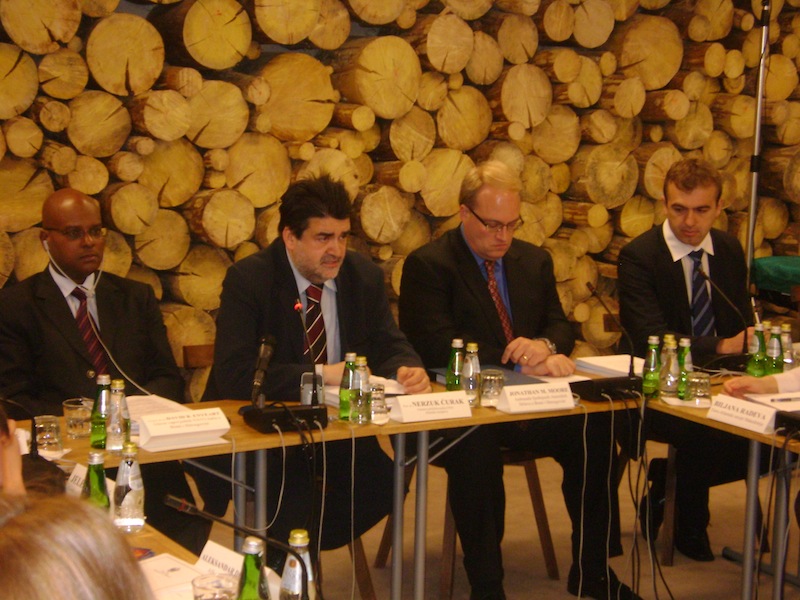 Atlantic Initiative Activities: Round table «NATO 3.0 –
The Role of NATO within the International Security Framework 2010 – 2020»

There is No Alternative on the Road towards NATO for Countries of the Balkans!

{artsexylightbox}The conference «NATO 3.0 – The Role of NATO within the International Security Framework 2010 – 2020» was held on May 12th, 2011 at Hotel Termag on the mountain of Jahorina. Atlantic Initiative and the Embassy of the United States of America (USA) in Bosnia and Herzegovina (BiH) organized the conference. This was an opportunity to compare the old strategic concepts of NATO 1.0 and NATO 2.0 with the newest concept – NATO 3.0. Conference guests were introduced to the so-called evolution within NATO and NATO’s ability to meet contemporary security challenges.

The aim of the conference was to bring together relevant experts from the field of Euro-Atlantic integration, as well as to present different future perspectives for NATO. The conference also emphasized the role of the Alliance in the Balkans’ security framework. The conference was attended by numerous guests and international officials, including Prof. Dr. Nerzuk Ćurak, General Major Bernhard Bair (COM EUROR), Colonel Hazim Hodžić (PSOTC), Charge d’Affairs of the USA Embassy in BiH Jonathan M. Moore, and Rohan Maxwel from NATO headquarters in BiH.

The participants were first addressed by Prof. Dr. Nerzuk Ćurak: «My appeal is dramatic – BiH must join NATO as soon as tomorrow. When I say tomorrow, it is not a metaphor. I am talking about tomorrow as tomorrow; I am talking about Friday the 13th of May. I could defend this idea with different arguments until judgment day. It’s with an ironic note that I reveal our weakness, but also with the wish of the majority of the people living in this country, the wish for common sense to finally prevail in matters of the state. Common sense sometimes must be encouraged, either by the carrot, or with a stick,» said Ćurak. He also mentioned that he had high hopes that the conference would «open up new horizons in order to get BiH on the right track, the track that was abandoned by political elites consumed with nationalism, ethnic exclusivity and a lack of compromise.» Prof. Dr. Ćurak pointed out that the right track for BiH was one where first stop is NATO and the second is the European Union (EU). He also stressed that BiH must be accepted into NATO unconditionally. «The possible conditions can be fulfilled through special arrangements between NATO and BiH, but within the Alliance. It is of great importance to demand ‘membership before conditions’. In the case of ‘conditions before membership,’ and in the changing geopolitical environment, a fatal strategic mistake might be made that would leave BiH out of the Alliance,» said Prof. Dr. Ćurak.

Jonathan Moore, Charge d’Affairs of the USA Embassy in BiH, did not completely agree with Prof. Dr. Ćurak. He said “the Alliance does not want to receive new members in order to establish stability and security in these countries, as some have suggested in BiH. In fact, the formula is exactly the opposite. New members must contribute to the increased stability and security of the Alliance. BiH and other countries aspiring for membership must prove that that they are countries that the Alliance wants within its ranks. BiH must prove that it can speak with one voice in organizations that work on the principle of consensus. BiH must prove that when it takes its responsibility within the Alliance, as is the case with its current program of partnership, it can certainly meet those obligations, rather than a situation in which one voice takes responsibility, while others deny it.” He pointed out that the U.S. appreciates the contribution made by BiH in peacekeeping missions abroad, but when it comes to the process of accession, BiH it lags behind in terms of reforms, both military and political, and that it will be necessary to ensure that BiH ultimately becomes a successful NATO member.

Rohan Maxwell from the NATO Headquarters in BiH, said that admission to NATO depends only on BiH. “NATO is interested in BiH as a partner, and we are spending a lot of time and money on it. In BiH, we are also physically present, and that will remain.  But the decision to join the Alliance and its political processes, that decision is left to BiH. In Brussels it was said – we expect steps toward meeting the set of conditions. One issue is still left unresolved.  The issue of immovable military property is unresolved even though it is one of the easiest questions. And that sends us a message – how do you expect to solve complex and difficult requests?” asked Maxwell.

Dr. Edina Becirevic once again expressed concern about the current security situation and the situation of BiH society. She agreed with Prof. Dr. Ćurak that BiH should immediately be admitted into NATO, and she put her arguments forward. “BiH citizens do not feel safe. The attempt to hold a referendum in the Republika Srpska (RS) evokes memories of the nineties. Fear is felt in the air. Distrust in political elites is permanent. The strengthening of Russia is clearly manifested in relations within BiH, as well as throughout the Balkans. As Russia flexes its muscles, movement away from NATO is the wrong way for BiH.  NATO must be the first stop.” Prof. Dr. Ćurak and Dr. Becirevic emphasized the cry of the citizens of BiH for NATO’s security umbrella.

NATO 1.0. was not timely in BiH. During NATO 3.0 a sentimental relationship is expected, and even a special one that favors BiH. BiH is in constant crisis. It does not speak with a united voice. NATO itself does not want to import a crisis. Change this, and comply with the set conditions – and NATO’s door will be open. It is the only way. Jonathan Moore and Rohan Maxwell again repeated this.  Although it was perhaps expected, it was unpleasant to hear.

The situation is not much better in either Serbia or Montenegro said the visitors from neighboring countries. Mrs. Jelena Milic said that in Serbia, the voice of those who want to join NATO is generally overwhelmed by the voice of those who prefer Russia.  However, it is also a sentiment commonly heard by those who don’t want to let go of memories of the NATO attacks. A similar situation exists in Montenegro. Popular support is at a precarious level. “In Montenegro at this moment, public support for membership in this Alliance is very low, at only about 36%,” said Alexander Dedović from the Alpha Center.

However, all conference participants were able to agree on one point – there is no alternative on the path towards NATO membership for the countries of the Balkans!