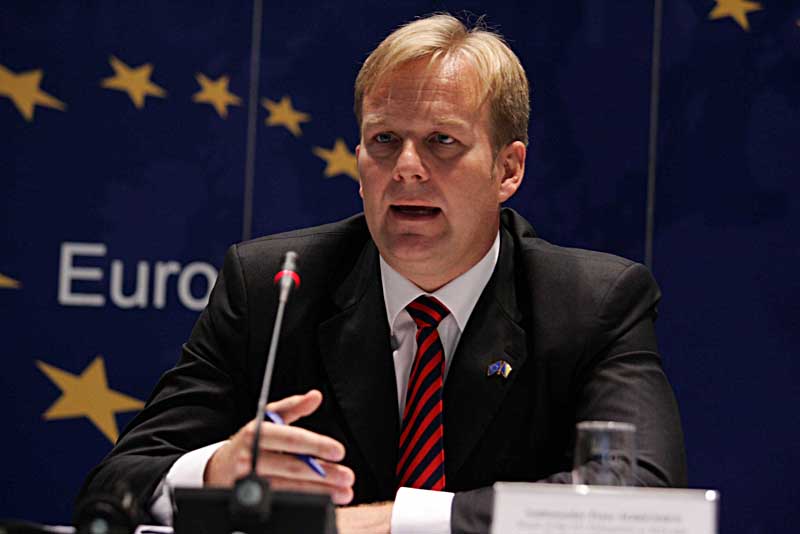 The European Union is ready to assist BiH

{artsexylightbox}With the submission of his credentials to Presidency Member Željko Komšić, Peter Sorensen began his mandate as Head of the Delegation of the European Union (EU) in Bosnia and Herzegovina (BiH) and the EU Special Representative (EUSR) on Friday, September 9th.

After presenting the letters, Sorensen officially took over leadership of the Delegation and the office of the EUSR.  Sorensen’s appointment represents an enhanced and reinforced EU presence in BiH, based on the Lisbon Treaty, which seeks to improve cooperation between the EU and BiH.  This includes a package of financial support amounting to over 660 million Euros of pre-accession assistance from 2007-2013, a fact Sorensen announced upon his arrival in BiH.

A citizen of Denmark, Sorensen was appointed as Special Representative via a decision by the EU Council on July 18th, 2011. Catherine Ashton has named Sorensen as the Head of the Delegation, and its Ambassador, from the EU to BiH.

Presidency Member Komšić welcomed Sorensen on behalf of the entire Presidency and wished him all the best for his double-hatted mission in BiH. Komšić pointed out that a great deal has changed for the better in BiH over the past several years, but that much remains to be done. Reforms are needed in order to accelerate the process of EU integration in BiH.

According to Komšić, Sorensen is to enjoy the full support of the Presidency and all BiH state institutions in the fulfillment of his mission.  However, Komšić informed the media that he remains aware that no one can do the work that local politicians are responsible for.  This includes Ambassador Sorensen, who has come to BiH with a strengthened mandate.

Sorensen stated that the EU is committed to BiH and the other countries of the Western Balkans. Through working on the implementation of the Stabilisation and Association Agreement (SAA), partnerships will be built and requirements met that will allow BiH to eventually apply for EU candidate status. This will require cooperation among all levels of government. Sorensen also noted that BiH will certainly become a member of the EU, and that any recent public claims to the contrary should be disregarded.

On the same day, Sorensen held meetings with the Chairman of the Council of Ministers, Nikola Špirić, Chairman of the House of Peoples, Ognjen Tadić, and representative of the Parliament of BiH, Denis Bećirović.  These were Sorensen’s first meetings following his accreditation. Špirić informed Ambassador Sorensen about reforms and progress made following the Dayton Peace Accords, as well as current challenges facing BiH.

The Chairman of the Council of Ministers shared his vision of the development of the internal policy situation with Ambassador Sorensen.  He stated that BiH is now at a turning point when local leaders must take responsibility for managing processes in BiH.  Furthermore, Špirić stressed that the only guarantee of democratic development in BiH is continuous inner dialogue and that the international community should play an advisory role on BiH’s path to Europe.

During the meeting with Tadić and Bećirović, Sorensen noted that the mandate of the EUSR is based on the strategic objectives of the EU in BiH and the EU Council’s conclusions regarding BiH in March 2011. Within Ambassador Sorensen’s scope of powers, he is expected to establish high-quality, efficient partnerships between his office and the national, as well as all other levels of government in BiH. This wil surely prove useful if BiH is interested in fulfilling the conditions of EU membership, as Sorensen announced following the meeting with Parliamentary leaders.

Sorensen’s first public address came at a press conference hosted by the Headquarters of the EU Delegation in Sarajevo. Sorensen reiterated what he had already told BiH officials, stating that the EU is strongly dedicated to an ultimate goal of a sovereign and united BiH integrated in the EU.

«Dedication is what continues to lead the EU’s focus and comittment in BiH. The EU’s main objective in the years to come is to continue and intensify partnerships will all governments and stakeholders. We, the BiH authorities and the Delegation of the EU, have a work plan – namely the EU Council Conclusions on BiH – that was adopted on March 21st this year. These conclusions contain all the answers to potential questions that may arise at the EU mission, including those concerning the Special Representative. To summarize, we can say that we all are here to focus on the EU in all of our activities.»

Sorensen also dismissed the possibility that the EU could do the job of local politicians. In order to reach the European goal, each individual in BiH must play a leadership role.  This includes citizens, the government, etc. It is clear to the diplomat that joint efforts at all levels of BiH’s government, and the dedication of its citizens, are a necessity to make the prospect of EU membership a reality.

The new EUSR emphasized that the EU wants to focus on short-term assistance to the government’s efforts to complete the necessary «homework» that will allow the SAA to come into force.

«We think that this is very important. This is the mandate that was given to us by the Council and we hope that the government can fulfill it. In order for the SAA to enter into force, adequate implementation of the interim agreement – or the part of the SAA that is already in force – is necessary. In particular, the adoption of the law on state aid must be harmonized with the EU legislation. This means that we need to see a significant effort made to address the verdict of the Sejdić and Finci case. Fulfilling these commitments is essential if BiH wishes to submit a credible application for EU membership. We are ready to assist in connection with the census at the state level. This is a key piece of legislation for BiH, for socio-economic development and is necessary if the country is to be capable of answering the questions contained in the EU Questionnaire.»

Additionally, the EU wants to ensure that key sectors, such as the judiciary, administration, economy and general infrastructure, are ready to meet the demands of EU membership. Sorensen did not fail to mention that all of these factors collectively form the reason for the EU’s increased presence in BiH. All of these tasks must be fulfilled in partnership with BiH’s institutions. Ambassador Sorensen expressed his satisfaction upon having heard President Komšić’s awareness that BiH’s institutions hold the highest level of responsibility in working towards BiH’s EU integration. Sorensen denied that he had ever referred to Dayton as the «past». On the contrary, the diplomat noted the EU Council’s conclusions, which state this is fully committed to the implementation of the Dayton Peace Accords.

There will be no hesitation in the use of repressive measures should they prove necessary in order for the EUSR’s mandate – the of encouraging local politicians to meet the obligations along the European path – to be fulfilled, noted Sorensen. This was discussed at the time when the EU Council released its conclusions regarding increased involvement in BiH.

«It is clear when and under what circumstances these measures can be used. Should any threats be made to the constitution’s stability, it is possible for us to propose to the EU member states and the EU Council that we wish to resort to these measures.  These are not measures that are used by the OHR because we are not the OHR. As I have already said, and as the High Representative has said, our mandates are clear and separate. It is clear what he does and what I do. My role is not to be a mediator, as that is the responsibility of political leaders. I think that they understand this. I read in the media that a shift has occurred, but I appeal to political leaders to fulfill their obligations. I must explain that we, as the EU, need a partner with whom we can work. Although this might sound like mediation to you, it is rather a mutual partnership in which we must work together.»

It is interesting to note the reaction of the President of the National Assembly of the Republika Srpska, Igor Radojičić, who said he does not expect Sorensen to «be yet another High Representative, because one is already too many».

«I do not expect imposed solutions and one more High Representative. Rather, we expect that our new European Representative will contribute certain practices and the ideas of EU standards, as well as enable us to better facilitate the procedures that will lead to European funds».

Among those first to welcome Sorensen to BiH were the British Foreign Secretary, William Hague, the United States Ambassador to Sarajevo, Patrick Moon and Representative of the European Parliament, Tanja Fajon. Hague noted that it will be crucial for the political leaders of BiH to work closely with Sorensen, the EU, the Office of the High Representative and the international community so that BiH can accelerate its slow movement towards the EU. The first step, according to the head of British diplomacy, is the formation of a broad coalition government that is able and willing to make tough decisions about reform.

The speed with which this issue can be resolved will impact the dynamics of further EU integration and will determine whether Sorensen will be able to reach important milestones on BiH’s path towards Europe. BiH has had a Council of Ministers with a technical mandate for 11 months. Such a situation is untenable and responsibility for the country’s fate lies with national leaders. The message that Sorensen will give in the coming days is that politicians in BiH are expected to begin doing their jobs. Those who hope that Sorensen will take on these types of responsibilities himself are sure to be disappointed.