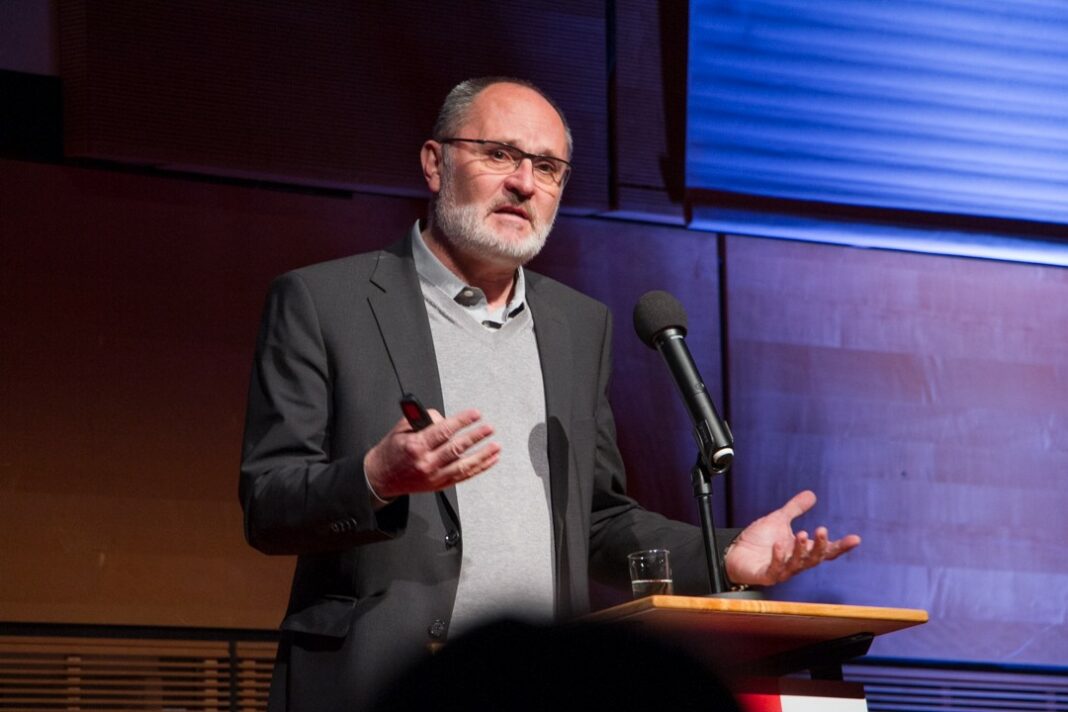 Vlatko Cvrtila is an expert in security issues and geopolitics, a professor in the Faculty of Political Science at the University of Zagreb, and rector of Vern’ University. He spoke to the Atlantic Initiative about the most recent terrorist attacks in Europe that reminded us of the spiral of horror we witnessed in 2015 and 2016 on the Old Continent.

In the interview, Cvrtila answers questions about the reactivation of the so-called Islamic State (Al-Dawla al-Islamiya fil Iraq wa al-Sham) in Europe, potential “triggers” i.e. causes of attacks and the role of political rhetoric in inspiring terrorism. He also discusses the recent terrorist attack in Croatia, radicalization within Croatian society, and Croatia’s security agencies’ views of neighbouring Bosnia and Herzegovina.

Lastly, he looks back at the recent American elections and the increasing influence of Russia and China in the Western Balkans.

Atlantic Initiative: What is your view on the series of new terrorist attacks in October and November in Europe, first in France and then in Vienna? It seems that they reminded the European public of the wave of similar attacks we witnessed in 2015 and 2016, and even earlier, on European soil.

Vlatko Cvrtila: Terrorism is a modern threat that is impossible to eradicate as long as there are reasons or excuses for this form of political violence. These “excuses” have not disappeared. On the contrary, they intensify from day to day. Reactions and counterreactions create a spiral of violence that is impossible to stop because, among other things, such a situation suits both sides.

Terrorism stimulates racism (and vice versa), which turns into radical narratives and even political platforms. Their political representatives then participate in election processes, thereby obtaining political power, which expands their area of activity, which again may provoke an individual or a group.

Terrorism is a European reality, a threat that will keep haunting us for a long time. Reactions to terrorism or racism are based on the belief in doing the right thing, which decreases the ability to reduce tensions.

Atlantic Initiative: The terrorist organization, the so-called Islamic State (Al-Dawla al-Islamiya fil Iraq wa al-Sham), assumed responsibility for the recent attacks. Have those, including some terrorism experts, who believed that the physical destruction of this organization’s last stronghold in March 2019 would also cause their ideological narrative to disappear, been proved to be naive?

Vlatko Cvrtila: Political elites of countries that participated in the fight against the so-called Islamic State promoted the narrative about successfully completed operations and victory, primarily for the sake of their domestic public.

This resulted in the naive conclusion that this group is no longer a threat to modern security.

However, it was clear that their territorial placement was only a phase in their development. Their military destruction did not mean the destruction of their ideology, which still exists and very successfully radicalises groups and individuals.

Atlantic Initiative: How would you comment on the fact that the “reactivation” of these circles is now “encouraged by appearances and the rhetoric of political leaders that has recently dominated the global public space” and apparently might have served as the “trigger”? For example, French President Emmanuel Macron caused particularly sharp criticism and reactions from the Islamic world with his speech about the alleged crisis of Islam and the “need for restructuring” of this religion?

Vlatko Cvrtila: Today’s situation is such that anything can be a trigger. It is not even necessary for something to happen for one to be encouraged to take radical action. Some individuals and groups have been radicalized, and daily observe the phenomena and activities confirming their radicalization, who are ready to engage in violent acts at any time.

President Macron’s speech is an example of how a terrorist act is taken advantage of for the purposes of public mobilization against Islam as a religion due to internal political needs. Particularly considering the overall political, economic and social situation in France.

Labelling an entire culture or religion as a potentially threatening actor is completely out of place and inappropriate. I am sure that his speech will be used to radicalize individuals and groups in the future, and it will often appear as “evidence” by terrorist ideologists.

Atlantic Initiative: In your opinion, what is the role of political rhetoric in inspiring terrorism?

Vlatko Cvrtila: It is big because every word spoken in a public space spreads and multiplies very quickly. In today’s world involving enormous opportunities for consumption and creation of information, and huge opportunities to communicate owing to technological developments, space has been created for radical narratives and rhetoric calling for violence.

This rhetoric doesn’t necessarily need to be present in public spaces or highlighted as a part of a political position by individuals or groups. Radical rhetoric is omnipresent in certain Facebook groups and in comments on news portals.

In such a situation, even moderate political rhetoric lives much longer than the moment it was uttered because it quickly transforms into a radical one, considering the deeply anchored radical views of individuals and groups on “opposite” sides.

Atlantic Initiative: The French opposition leader, Jean-Luc Mélenchon, says that there is “hatred against Muslims disguised as secularism in France,” and that “we must respect Muslims.” The right-wing populism, often with elements of Islamophobia is rising in the EU on the one side, and that in turn is being used by terrorist groups for radicalization and self-legitimization. To what extent is this a vicious circle where dangerous extremes feed one another?

Vlatko Cvrtila: Radical political rhetoric is increasingly present in Europe because advocates of extreme political platforms moved to the mainstream political space from the societal margins. Their once marginal influence on society is increased largely due to terrorist attacks, which win them a certain amount of political power through the election process. Then, with everyday media presence, they disseminate hate speech and racism.

Terrorism contributed to the growing fear and occurrence of extreme political platforms and racism in Europe. Their activities increased fears among members of the Islamic community, and at the same time strengthened the radicalism among its extreme members. It seems that radicals on both sides have stripped us of the possibility of a normal dialogue or the development of narratives that would normalise societal processes.

TERRORISM AND RADICALIZATION IN CROATIA

Atlantic Initiative: Although the recent armed attack at St. Mark’s Square in Zagreb was officially deemed to be three attempted homicides of police officers, it was also confirmed that it contained elements of terrorism. What is your view of this phenomenon?

Vlatko Cvrtila: Such an offense has elements of a terrorist act, considering that the information available has given rise to the conclusion that it was a radicalized individual. But it is impossible to identify the motive, therefore it is hard to say whether it was a classic terrorist attack.

This incident is a warning that radicalized individuals do exist. Society should take the existence of the radicalization process seriously and examine the reasons for the development of such radicalization.

Atlantic Initiative: Prime Minister Andrej Plenkovic recently spoke about radicalization at the Croatian Parliament in the aftermath of the attack. He sounded worried about the rise of radical political rhetoric in Croatia. How do you explain this phenomenon?

Vlatko Cvrtila: Radical political rhetoric is a feature of all democratic societies, caused by different political, economic and social circumstances. The Prime Minister warned that turning a blind eye and minimizing radicalization may have vast consequences in the future. Furthermore as a society, we should face this phenomenon and take immediate action to curtail it.

Facing radicalization is extremely complicated for modern democratic states and societies because democracies are unable to control all social processes. Any increased control or use of repressive measures leads to authoritarianism and totalitarianism, and a denial of democracy.

Atlantic Initiative: Are rightist terrorism and violent extremism comparable to terrorism based on the so-called takfir ideology (identified “as an ideological substrate based on which violent extremist views and activities were developed”), and how?

Vlatko Cvrtila: I consider them comparable only in regards to how they radically shape platforms that exclude others even in their own culture, and the perpetration of political violence that causes fear and further radicalization. To me, they are enemies of democracy and of societies of equal and free people, regardless of their cultural background. In that regard, I see no difference between them.

Vlatko Cvrtila: Reactions to security assessments do not surprise me, because it is extremely difficult to choose your words when warning others about radicalization, without making it sound, to some, like an exaggerated assessment or misinterpretation of the situation in Bosnia and Herzegovina.

Unfortunately, I cannot see any big potential for change in this communication; on the contrary, it seems to me that it is decreasing and that our mutual understanding is fading away. This can have consequences for our ability to successfully face the problem of radicalization.

Atlantic Initiative: What do you think about the outcome of the recent US elections, and what impact could it have on our region in geopolitical terms?

Vlatko Cvrtila: A somewhat increased engagement by the USA in the region which was absent during President Trump’s Administration is likely. President-elect Biden has a lot more experience in international politics, and he knows the situation in the region well enough to be able to contribute to some new policies and approaches.

China also has long-term strategic goals involving a breakthrough in Europe, and an instable region with corrupt societies which is ideal for that. Some activities will be in the hands of diplomacy and negotiations, and some in the domain of geopolitical games, which means that we should not expect any radical moves or new policies that would push the region from its current, less stable state into one of greater stability.

Atlantic Initiative: What is your comment on the growing influences of Russia and China in the region, and manifestations thereof? Is this area the space for simultaneous hybrid wars and hybrid actions? As you once said, goals are always strategic.
Vlatko Cvrtila: Russian influence has grown as the USA’s interest in the region decreased, accompanied by the powerlessness of the European Union to influence democratization processes in the region.

At the same time, China has been using its position as an external actor offering investments that are indispensable in weak regional economies.

All available means are being used in these strategic positioning processes, and the most effective ones nowadays are hybrid means that use information tools to create narratives of partnership and friendly relations in the public space, aiming at long-term strategic connections.

This interest by great powers really flatters small countries that do not know that it always gives rise to a level of dependence that is hard to escape. Anyway, the region will continue offering space for hybrid rivalries of external actors, limiting the possibility for regional actors to create political choices that will guide them to the only logical outcome –European integration.