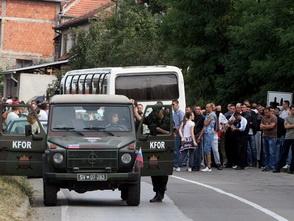 The night of the 25th to 26th July once again put the north of Kosovo in the headlines and raised concerns in regional political circles. The administrative check points of Brnjak and Jarinje -currently under the authority of KFOR- were due to pass under the control of a special unit of the KPS “Rosa”, but were in fact prevented in doing so by the Serbian people who live near these crossings.

It all started on 20th July, when the official government of Kosovo announced that it had introduced a ban on imports of products originating from Serbia, sparking a revolt of the local Serbian population. The decision to hand over authority of the KFOR controlled checkpoints had previously been called into question, as the local Serbs had already began staging peaceful protests and it was argued that the move could increase tensions and create more problems. Trouble re-emerged on Monday, 25th July, when local Serbs blocked the crossings with logs, trucks and tractors with sand, thus preventing special police from crossing and taking over checkpoints. During next few days, there was a conflict between the special unit “Rosa” and the local Serbs, where one policeman was killed, and more police officers and civilians were wounded. To make things worse, Serbian extreme right-wing groups joined the conflict, vandalising and burning one of the checkpoint huts in Jarinje. It is alleged that the hooligans were members of the right-wing organisations “The Guard of Emperor Lazar” and “1389”.

Due to the severity of the situation – which threatened to escalate the conflict between Serbs and ethnic Albanians, the Minister for Kosovo and Metohija Goran Bogdanovic and the head of the team in a dialogue with Belgrade and Pristina Borko Stefanovic headed to Kosovo. After returning to Serbia, they claimed that American soldiers at the border crossings, treated them “as criminals,” thus further inflaming the mood in certain sections of the Serbian media. After numerous threats and warnings about a possible escalation of the conflict, the situation has for the time being seemingly calmed down. On Saturday 30th the KFOR unit withdrew a few hundred meters away from the checkpoints and managed to open the crossing at Brnjak several hours later, followed by the crossing at Jarinje on Sunday. The Serbs were still present at these two sites, however, and therefore the crisis continued. At the time of this writing, there have been no new reports of possible conflicts in the administrative crossings in northern Kosovo.

The so called “Quint” countries – UK, USA, Italy, France and Germany have been quick to condemn the decision of the Government of Kosovo- headed by Prime Minister Hashim Thaçi – to send special units to the north of Kosovo in spite of opposition from EULEX. The “Quint” countries emphasized the importance of cooperation between the authorities of Kosovo and EULEX, and warned them that they must work with the EU, EULEX and KFOR to find a peaceful solution to the Kosovo conflict. Similarly, the High Representative and Vice President of the European Union, Catherine Ashton, has warned that unilateral moves are not the way forward, adding that “the latest developments are intolerable. I am sorry for the victims that these incidents have caused. Our thoughts are with the bereaved families and victims. It is the responsibility of both Belgrade and Pristina to immediately reduce tensions and to restore peace and security for all. “There have been no reaction from the authorities of Bosnia and Herzegovina, because we have not recognized Kosovo as an independent state, and thus can not officially comment on these events.

After the special session of the Assembly of Serbia and adoption of the Declaration on Kosovo, with which the Government is obliged to protect lives and property of Kosovo Serbs, Serbian President Boris Tadić said that peace is the only solution to the Kosovo crisis, and that only peaceful politics could bring results in defense of legitimate national interests of Serbia and its citizens.

On Monday 1st August news spread throughout the region that the Prime Minister of Kosovo Hashim Thaci had ordered a general mobilisation of Kosovo’s security agencies and had advised the highest level of preparedness and readiness so that Kosovo’s security agencies could “respond with all available resources in case of any infringement of national sovereignty and territorial integrity of Kosovo.”

We are all waiting for an official reaction of Belgrade, as well as Western countries and Russia.