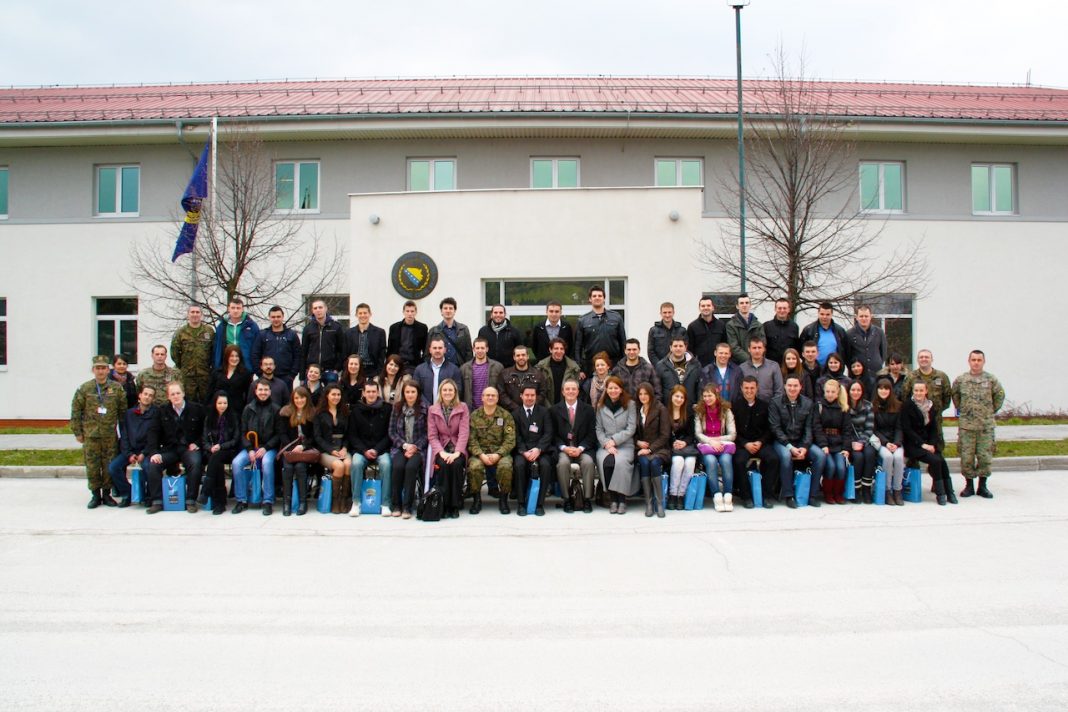 15 students from the Republika Srpska (RS) attended a conference called Bosnian and Herzegovinian Contributions to the ISAF Peacekeeping Mission in Afghanistan.  The conference, which was sponsored by the British Embassy, took place on March 22nd at Camp Butmir.  During the conference, students had the opportunity not only to learn about the experiences of NATO forces in Afghanistan, but also about NATO peacekeeping operations in general.  Most students from the RS were not sufficiently informed about these topics prior to the conference.

Following the four-hour conference, students were able to exchange their opinions regarding Bosnia and Herzegovina’s (BiH) potential NATO accession in an informal setting.

Nataša Miletić, a student at the Faculty of Business Economics from Bijeljina said, “I didn’t know much about these issues prior to attending the conference.  I’ve heard of NATO, but actually knew very little about it.  I imagined that the conference would be organized differently.  I thought a group of students and a few teachers would informally discuss these topics.  However, this conference truly exceeded my expectations due to its high level of organization.  We had the chance to hear from extremely competent and relevant individuals such as ambassadors, colonels, professors, commanders and soldiers who have actually been in Afghanistan.  What appeals to me most about NATO is its guarantee of general security for the region in general, and BiH in particular.  Knowing that there will not be future war or unrest here is very important to us.  A second important issue is that of economic security.  In some ways, this is almost as important as general security.  I believe NATO membership would really allow for something good to finally happen in this country.”

Nataša added that she now clearly understands BiH’s role in the NATO mission in Afghanistan.  She is somewhat concerned about future financial responsibilities and commented on this.  “However, I noticed that most NATO members are highly developed countries.  If our membership could ensure the same for us over time, I’m all for NATO.”

Suzana Klještan, a third year student at the Faculty of Business Economics in Bijeljina noted that, “before this conference, I never thought about these topics and now I have a much clearer picture.  Listening to experts helped me form my own opinion about NATO.  I think more seminars like this should be held so that citizens can be better-informed.  In my opinion, there are both pros and cons to BiH’s NATO accession.  I can’t say much about the negative aspects at this point because I have not learned much about them.  On the positive side, we could enjoy political stability and as a result, improvement in our economic situation.”

Zoran Stanić, a graduate of the Faculty of Business Economics in Bijeljina said that, “This topic deserves more attention than it is usually given in public.  Regarding my opinion concerning NATO accession, nothing has changed as a result of the conference.  I was already pro-NATO.  This conference allowed me to further strengthen and solidify this belief.”

He continued, saying that he “would put particular emphasis on Prof. Dr. Nezuk Ćurak’s presentation.  Professor Ćurak noted that capital seeks safety, and I absolutely agree with that.  So, since I’m an economist, it’s this aspect regarding NATO accession that interests me most.  If we look at the countries that became NATO members, we see that they are all economically advanced.  The security that NATO would bring is also important, especially in a country like this where memories of the war are still quite fresh.”

Students were most inspired by Prof. Dr. Ćurak, whose presentation was frequently noted following the conference.

Isidora Đurić, an Economics student, also referred to Professor Ćurak’s presentation, saying that, “this was the first conference that I have attended.  I had a really positive impression.  It was so well-organized and basically, everything was great.  I didn’t have much information about NATO before this, other than the few basic things we’re taught in school.  I’m glad that I had the opportunity to participate in a project like this.  Professor Ćurak noted that this was an important and eventful day for BiH.  I’d support that statement and also add that it was a great experience for the youth participants.”

Milica Topalović, also a student from Bijeljina, echoed Đurić’s comments noting that she was “very pleased to have the opportunity to participate in this conference.  For me, this is the first event I’ve attend related to NATO.  It left a positive impression on me because it was a very well-prepared and interesting event.”

Topalović went on to say that she “would single out Professor Ćurak’s speech as inspiring.  It helped eliminate the skepticism that I’d previously had regarding NATO.  Majors Beljan, Alibašić and Stokić, and Colonel Hodzic provided us with a clear description of the NATO operation in Afghanistan.  I hadn’t had a chance to hear about this before the conference.  I will not quickly forget this experience and have adequate material for reflection.”

Zorica Glišić, a freshman and the youngest conference participant, considered the conference very instructive. “This was the first NATO conference I have ever participated in.  I think our country should be a member of NATO.  If NATO will provide greater security and a better future for the citizens of BiH, I support our accession.  It definitely has my vote.  I think more events like this should be organized in BiH for youth and all citizens.”