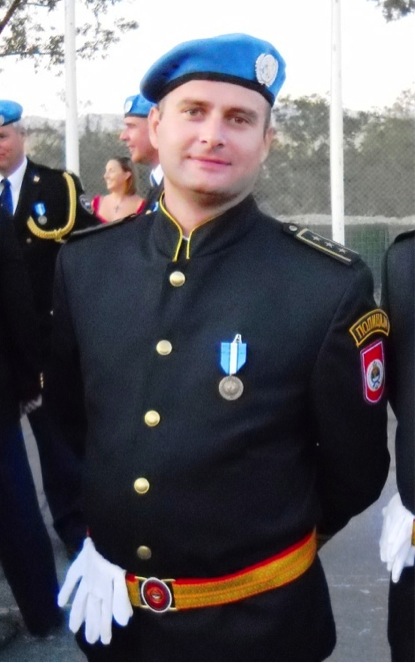 BiH Contingent to Increase in Cyprus

Side by Side with Police Officers from Around the World

Until recently, Bosnia and Herzegovina (BiH) was a country that largely relied upon the engagement of international peacekeeping missions. Peacekeepers from around the world have come to BiH, offering their knowledge and skills to people in the region, and providing much-needed security. Today, the security institutions and agencies in BiH have reached standards and developed capacities at a level that now allows us to participate in missions around the world. BiH police officers have participated in UN peacekeeping missions in East Timor, Liberia, Sudan and Cyprus, where our contingent makes its full contribution to meeting the goals of this mission.

The Ministry of Security recently announced the decision of the General Staff of the United Nations peacekeeping operations to approve BiH’s contingent to send three more police officers to Cyprus.

“Given the complexity of peacekeeping missions and the fact that our police officers in the mission are in the same unit with the police officers from Italy, Ireland, Australia, Croatia and others, it is necessary to emphasize that this is yet further evidence of the competency, efficiency and professionalism of Bosnian officers in their performance in international obligations. I am pleased with the news that the head of the BiH contingent Miroslav Milojevic will soon be promoted to a higher position in the contingent of the mission in Cyprus, ” said Minister of Security, SadikAhmetovic, after the decision was made to increase BiH’s contingent in Cyprus.

In July 2011, representatives of the BiH Ministry of Security attended the awarding ceremony of merit medals that were presented to Bosnian police officers Amir Kasapović and Dusko Simic. This event marked the beginning of the possibility to increase the number of police officers from BiH in the peacekeeping mission in Cyprus.

Patrolling the Zone of Separation

According to Miroslav Milojevic, our special knowledge, skills and professionalism show. Milojevic serves as the deputy chief of police components of peacekeeping missions to the UN in Cyprus. When speaking with Atlantic Initiative, he said that the tasks of the UN mission in Cyprus – as stipulated in UN Security Council Resolutions- are related to the prevention of renewal of conflict between the two sides Specifically, they are to maintain the status quo in the buffer zone, establish law and order and achieve a return to state before the outbreak of conflict. Since 1960, when Cyprus gained its independence from Great Britain, Greek and Turkish Cypriots have been in conflict over the territory of the island. The United Nations peacekeeping mission in Cyprus has been present since 1964. It now has an active role in mediating negotiations between leaders of the two communities on Cyprus (Greece and Turkey) in order to reach a lasting solution to the Cyprus conflict.

What is the role of the BiH contingent in fulfilling the tasks of the Mission?

– The tasks of the BiH police contingent were the mandate of the mission. In practice, the BiH police contingent is to actively participate in patrolling the buffer zone in order to control possible civilian access to the area.  They perform tasks of a humanitarian character, based on freedom of expression and religious freedom.  They permit access to the zone of separation as part of the management structure of the police mission.

What is the security situation in Cyprus right now?

– The security situation in Cyprus at this moment is at an extremely high level of security, and predictions suggest that it will not deteriorate in the future.

How many of our members are currently with the mission?  What are their daily tasks and what are the conditions for work?

– The current Bosnian police contingent to Cyprus has eight members. Their daily tasks relate to patrolling the buffer zone in order to control the possible access of civilians. They are charged with solving certain tasks of a humanitarian character, for example, visits to national minorities in the territory controlled by an ethnic majority.  They also promote freedom of religious expression through visits to places of worship during religious holidays and handle the permit process for the controlled access zone, which allows civilians to access their property.  Finally, they execute a number of managerial jobs within the structure of the police mission.

A Worthy Representation of BiH

You have been selected to head the BiH contingent, and you are up for another promotion in Cyprus. How would you describe your experiences?

– I currently hold the position of deputy chief of police components of peacekeeping missions in Cyprus. We are currently in the process of electing a new head of the police component of the mission because the current head will leave the office at the end of October 2011. Being awarded this position would mean a great deal, as it would officially recognize my personal and professional results thus far.  It would also represent a success for my family and the Republika Srpska Ministry of Internal Affairs, which sent me as their representative to this peacekeeping mission. My nomination was recognized by the RS MUP, for which Minister Stanislav of the RS Ministry of Internal Affairs awarded me with the distinction of “Silver Officer” in February of this year.  This all gives me more incentive to achieve even better results within the mission and I am proud to be a worthy representative of BiH’s police. I should also emphasize that I am grateful for my family’s support, especially my wife Zorica, without which past and hopefully future successes wouldn’t have been possible

Do BiH police officers have the capacity to meet the international obligations as well and effectively as their counterparts from EU countries?

– I think that police officers from BiH have absolutely all the prerequisites for the efficient and effective execution of all international obligations.  They are on completely equal footing with their counterparts from EU countries, but also from other countries in the world.