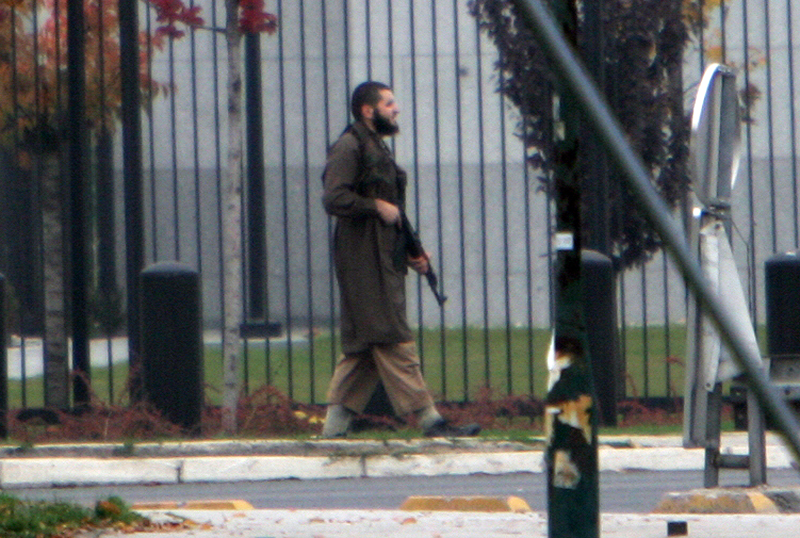 Shots at the U.S. Embassy, shots at BiH

A member of the Wahhabi community, 23-year-old Mevlid Jašarević, born in Novi Pazar, carried out a terrorist attack on the United States Embassy in Sarajevo on Friday, 28 October, which resulted in the serious injury of 41-year-old policeman Mirsad Velic, engaged in securing the embassy.

As the police investigation has so far revealed, Jašarević arrived in Sarajevo on Friday around 14:00 in the company of two Wahhabis from the village of Gornja Maoca – Dino Pečenković (24) and Munib Ahmetspahić (21), and the attack began at 15:20 and lasted until 16.15, when it was stopped by a sniper shot, hitting Jašarević in his right thigh.

Condemnation of the attack

The authorities in Bosnia and Herzegovina immediately condemned the attack. That same night they convened an emergency session of the Presidency of BiH, and just a few hours after the terrorist acts of the U.S. embassy, Chairman Zeljko Komsic visited the U.S. Ambassador Patrick Moon to express regret.

Ambassador Moon also sent a clear message that the attack would not affect the friendly relations of Bosnia and Herzegovina and the United States, and that it will not in any way divert the activities and efforts that his country is making here.

“The United States has been a friend of the citizens of Bosnia and Herzegovina, and we are here to stay,” said Ambassador Moon.

The act of an individual

Among those who condemned the terrorist act is also the Islamic Community in Bosnia and Herzegovina.

In the days following the attacks, Philiph Reeker, Deputy Assistant Secretary of State for European and Eurasian Affairs, also visited Bosnia and Herzegovina, stressed that this is actually the work of an individual and that it should be treated as such.

“Someone opened fire on the U.S. embassy in order to hurt Americans. However, it was a citizen of Bosnia and Herzegovina, policeman Mirsad Velic, who was injured and heroically bore the brunt of the attack, which is why I visited him and conveyed to him the gratitude of the Secretary of State Hillary Clinton”, said Reeker during a press conference at the Embassy of the United States.

The family of Mevlid Jašarević claims that he got involved with the Wahhabis during his stay in Austria, where he lived and served three years in prison for committing a robbery of 100,000 euros in 2005. After returning from Austria he visited the village of Gornja Maoca, a known Wahhabi stronghold, in February 2010, and in November the same year he was arrested in Novi Pazar, where together with Fatmir Muratović, was suspected of having planned the attack on ten ambassadors who came to the meeting in Novi Pazar. Back then Jašarević was armed with only a so-called Rambo knife. Allegedly, after the overwhelming police action after the shooting at the building of the U.S. Embassy in Sarajevo, he claimed he came to “help Muslims” and that he did not want to hurt any of them.

Although the investigation is not yet over, for now it is known that besides arresting Jasarevic, Pečenković and Ahmetspahić, the police brought in another person – Šeherzada Saric, a native of Buzim, currently residing in Bihac. Also, in the Sarajevo suburb Vojničko Polje the police searched the apartments of certain members of the Wahhabi community. The investigation has not only been limited to Bosnia and Herzegovina. Serbia also launched into action and police arrested 17 people belonging to the Wahabi movement from Sandzak, who might be associated with this attack, or might have important information on the case. In addition to local investigators, agents of the Federal Bureau of Investigation (FBI) from the U.S have supported the investigation.

After the terrorist attack on a police station in Bugojno, the people of Sarajevo and many others who are not related to terrorism, but feel the safety of the citizens of Bosnia and Herzegovina is endangered, may wonder how it is possible that these things continue to happen. Vlado Azinović, a professor in the Department of Security, Faculty of Political Sciences in Sarajevo, in  “Oslobodjenje” has given an answer in his interview:

‘I think that this deep and protracted political crisis prevailing in Bosnia and Herzegovina since 2006., has a negative impact on more aspects of life, including our security. One year ago you had an incident in Skenderija, when also at the end of working hours, in the greatest city bustle, one minor emptied a full box of bullets from automatic rifle firing at police officers. Then, also greatly thanks to luck, we avoided serious consequences, as well as last summer at Bezistan, when, again, a minor, in broad daylight shot randomly at by-passers. Every day we witness the attacks with different weapons on the city streets, so it is sometimes hard to resist the impression that our more general security rests on the pure coincidence and factor of luck than on the mechanisms of prevention and deterrence.

The non-functioning state, and the demolished system of social values, combined with economic problems, poor education and radical ideologies, are the perfect opportunity for the emergence of activities of extremist groups or individuals. Our problem is that these same political forces that are blocking the establishment of a functioning and effective state now, through the case of Mevlid Jasarevic, are gloating over the consequences of the non-functioning state for which they themselves are in fact partially responsible. It’s a bit schizophrenic, but somehow passes without any response.’

Therefore, we should take seriously the words of the Ambassador of the United States, Moon, who hopes that this incident will be used to help the citizens of Bosnia and Herzegovina to join and head toward a common goal in accomplishing what is needed to become a part of Europe.