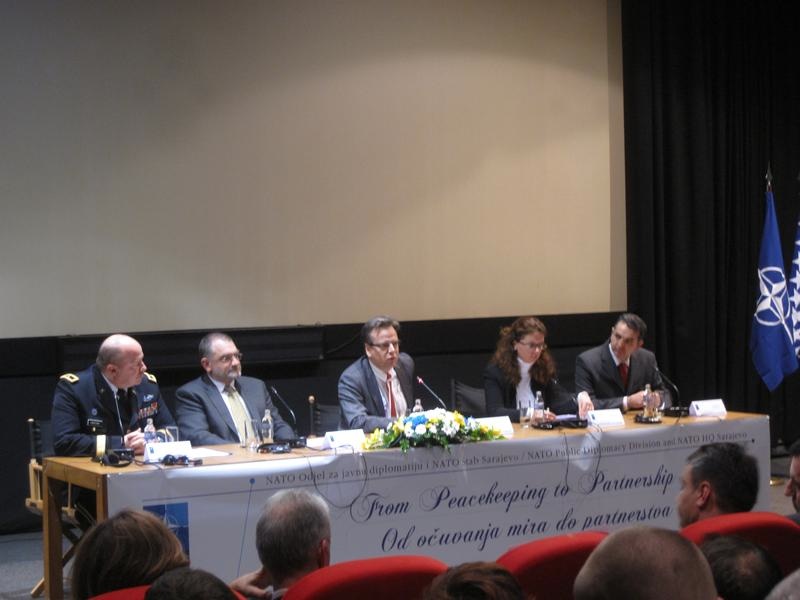 A documentary film entitled “From Peacekeeping to Partnership” was screened at the Obala Meeting Point Cinema in Sarajevo, Bosnia and Herzegovina (BiH) on December 14, 2010.   The 30 minute film describes the very challenging role which NATO has played in BiH from its engagement in the 1990s until today, with footage compiled between 2008 and 2010.

The three-part documentary examines the course of NATO’s involvement in BiH, first describing the establishment and maintenance of peace.  It subsequently addresses military sector reform and BiH’s progress in the context of Euro-Atlantic integration.

The film illustrates processes of troop reduction, as well as the reform and reintegration of the joint supreme military command.  Key political players from the period during and directly following the conflict in BiH were interviewed for the film.  “From Peacekeeping to Partnership” tackles those issues which have already been addressed in BiH regarding military reform and current challenges.

Following the screening, BiH Member of the Presidency, Bakir Izetbegović, addressed the audience.  President Izetbegović noted that defense sector reform in BiH, under NATO’s guidance, is the best example of successful reform since the implementation of the Dayton Peace Agreement in December 1995.  He commented that continued participation, support and encouragement given by NATO would inevitably achieve future positive results.

Izetbegović noted with great regret that the anniversary of the Dayton Peace Agreement is now also the day when Dayton’s main arbitrator, the American diplomat Richard Holbrooke, passed away.

Chris Bennett, Office of the High Representative in BiH

Chris Bennett welcomed the attendees, expressing his satisfaction with both the film’s long anticipated premier and NATO’s continued interest in BiH.  Bennett noted the success of defense reform in the country and praised the establishment of a joint, professional military force.

General David Enyeart applauded the efforts of the Ministry of Defense and the Armed Forces in reform processes.  He reminded the audience of the principle of collective defense, suggesting that the “umbrella of security” which NATO brings can provide stability and peace in the region.  A particular challenge which remains for BiH is the legal transfer of immovable military property to the state.  The transfer of these properties is one of the necessary conditions set out in Tallinn in April 2010 when MAP was assigned to BiH.  “Addressing these 69 sites is what will unite the nation and that is why this issue is so important for the alliance,” said Enyeart.

The Head of Promotion from NATO Headquarters in Brussels, Michel Duray, presented NATO’s new strategic concept, explaining how the recent NATO summit in Lisbon represented a global debate on security.  The new strategic concept “offers three paths to the creation of security: collective defense, crisis management and partnership,” noted Duray.  He concluded by adding that reform processes are necessary both in BiH and with NATO itself.

The next panelist to address the audience was dr. Edina Bećirević, President of Atlantic Initiative in BiH. Bećirević noted that there is broad support for NATO membership, both in the Federation and Republika Srpska (RS). “ It seems that citizents both in Federation BiH and the RS believe that NATO membership is essential for lasting regional peace, economic prosperity and progress,” she said.

Ministers and diplomats were subsequently offered the floor in order to address attendees.  Danish Ambassador to BiH, Kirsten Geelan, noted that other NATO members are aware and appreciative of BiH’s efforts on both the domestic and international levels.  Ambassador Geelan mentioned the BiH troops active in Afghanistan who are incorporated in the Danish ISAF contingent as evidence of this commitment.

BiH Minister of Defense, Selmo Cikotić, stressed the importance of defense reform in BiH.  “I think the reform of the Armed Forces provided a response to the question of how some very complex issues in BiH can be solved,” he said. Cikotić then commented on the political and practical nature of these reforms, saying “I think that within the defensive structure, questions of different ethnic and regional interests are harmonized pragmatically.  This shows that similar results can be achieved in other social structures and that we should follow the positive example of the defense reform process for other challenges.”

This debate ended with proposal to make screening of this film in all parts of Bosnia and Herzegovina with the purpose of reminding citizents about the role of NATO in th past, and with the aim to inform them with the essence of necessary reforms in present and future NATO – BiH partnership.