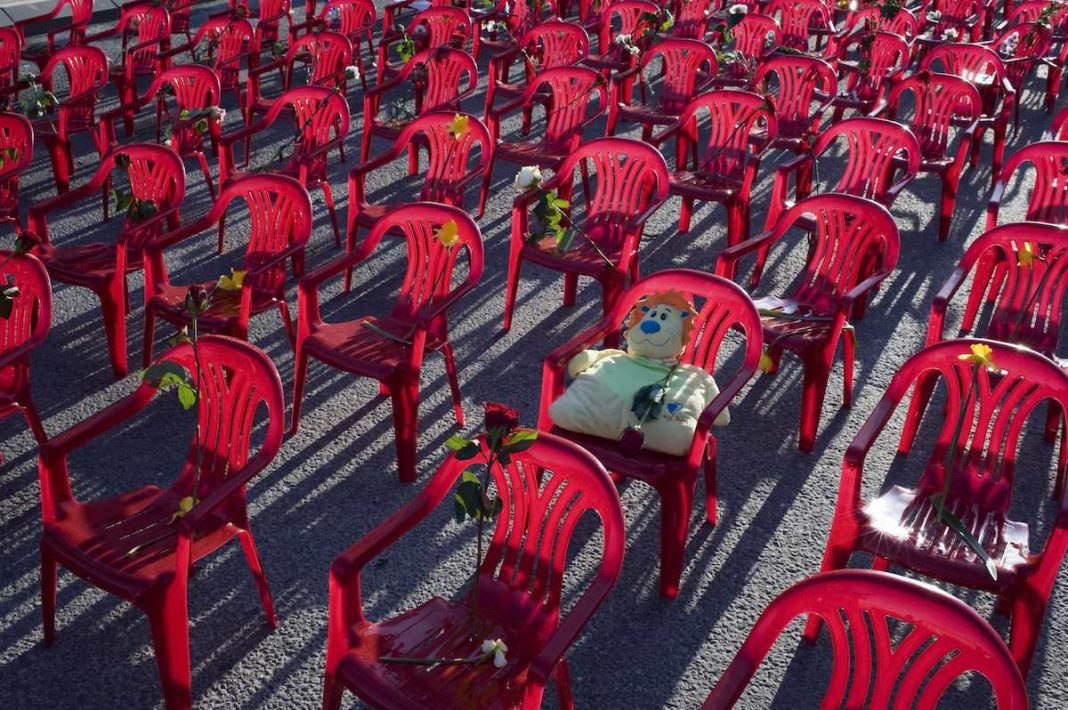 ‘Sarajevo Red Line’ to be held Friday to mark the 20th anniversary of Sarajevo’s siege – the longest in modern history.

Sarajevo, Bosnia and Herzegovina – On April 6, Sarajevo is marking 20 years since the beginning of the longest siege in modern history, during which Serb forces killed 11,541 of its citizens – more than 1,000 of them children – with grenades and snipers.

A concert entitled “Sarajevo Red Line” will be held in the memory of those killed during the 1992-1996 siege of Sarajevo. Its organisers want to send a message to the world, not to repeat such slaughter.

“This project will serve as a warning to wholesale destruction, firstly the destruction of every person who happened to be under siege,” said Sarajevo mayor Alija Behmen.

Nobody will sit on the 11,541 chairs placed in Sarajevo’s centre. “The chairs being placed over 800 metres will remain empty on April 6, because the people killed during the siege are unable to attend the show. They were civilians and Sarajevo’s defenders,” said Haris Pasovic, project organiser and theatre director.

More than 60 per cent of its citizens voted in an independence referendum held in early 1992  with 98 per cent of them in favour.

As soon as Bosnia and Herzegovina was recognised by the international community, fighters linked to power political interests who opposed independence  began atacking Muslims and Croats. The siege of the capital, Sarajevo, had begun.

It is estimated that during the war in Bosnia and Herzegovina, more than 100,000 peple were killed. Dozens of women were raped and hundreds of thousands of people were forced out of their homes or fled before a peace accord was signed in 1995.

“A drop of my blood falls and Bosnia does not dry out,” reads a sonnet engraved on the memorial plaque of Suada Dilberovic and Olga Sucic Bridge in the city centre, a testament to the first official victims of the Sarajevo siege, killed by Serb soldiers on April 5, 1992, during peaceful anti-war demonstrations.

Dilberovic, born in 1968 in Dubrovnik on Croatia’s coast, was a fifth-year medical student. Sucic, born in 1958, was a parliamentary employee and a mother of two.

A day later, the Serb ring around Sarajevo was officially closed, pushing more than 300,000 people to lead a life without power, water, gas, food, or telephone service. New signs sprang up on Sarajevo’s intersections: “Sniper, watch out!”

Public transport stopped. Shops were transformed into collection points for humanitarian aid – the gift of the international community, completely unprepared to stop the bloodletting in the streets which the world came to know through foreign reporters. They wrote about the reserve field of the Koševo Stadium that had turned into a cemetery, massacres in schools and bread and water queues.

Children invented a new form of fun: A little while after explosions, they would run outside, wanting to be the first to grab the tails of 62, 80 or 120-milimetre grenades, which meant they would be the coolest kids on the block that day. Parents screamed after them in vain not to go out, fearing and despairing that they couldn’t provide them with security and a decent childhood.

During nearly four years of siege, an average of 329 grenades fell on Sarajevo each day. The daily record of 3,777 grenades was tallied on July 22, 1993.

“It’s almost unbelievable that despite the unspeakable horror, Sarajevo not only endures, but shows its spiritual superiority in comparison to the rest of Europe,” said Pasovic in 1993 in conversation with journalist Nada Salom, now a contributor to Al Jazeera Balkans.

Two decades later, many Europeans will join Sarajevans in marking the 20th anniversary of the beginning of the siege. Among them are journalists who reported from wartime Sarajevo. The idea about foreign correspondents’ reunion at their “base”, the Holiday Inn hotel, started with a few email exchanges and a Facebook group.

It was started by Remy Ourdan – of French newspaper Le Monde – who was 22 when he began reporting on the siege of Sarajevo, a city he stayed in for four years and where he returns frequently.

Soon, dozens of journalists contacted him and the gathering of old colleagues grew into a public event with film screenings, conferences, workshops and exhibitions.

“I might have initiated it, but I didn’t organise anything,” said Ourdan, who came to Sarajevo weeks before the reunion. “That was the whole idea… because that is your memory, your war, your country.”

Memories of wartime Sarajevo still haunt him, although he reported from nearly all the other subsequent wars, including Kosovo, Iraq and Afghanistan.

“The situation during the Sarajevo siege was very unusual. In warzones, the civilians usually run away, and that is their right. While the fighters stay alone, and we, as reporters, go after them. Here, everybody was stuck together – the fighters, the civilians and us reporters who’d decided to stay. It was a very special situation. In a way, it was our war together,” recalled Ourdan.

The doctors who attended to more than 50,000 citizens wounded by grenades and bullets particularly remember the war.

“No other generation of surgeons in the painful wartime history remembers performing surgery in theatres, the walls of which are shaking from bombings during four long, cold and dark years,” recalled Dr Ismet Gavrankapetanovic, head of Orthopaedics and Trauma at the Clinical Centre of the University of Sarajevo and a Medical faculty professor.

Dr Gavrankapetanovic and his colleagues saw the wounding of the wounded for the first time. “The children whom we operated on a day or two before were again wounded at the children’s department of the Orthopaedics Unit, with direct grenade hits to the unit’s walls,” he recalled.

“The doctors who stayed in Sarajevo for four years made a big sacrifice to the medical profession and the citizens of Sarajevo.”

The city was defended by a poorly equipped Army of Bosnia and Herzegovina, consisting mainly of Bosniaks, but also of Serbs and Croats.

Sarajevo’s only connection to the outside world was a tunnel, dug during the war beneath the Sarajevo International Airport. Today it is a must-see tourist destination, with a permanent museum collection.

The Kolar family – whose house at Butmir contains the tunnel’s exit – is now the guardian of the Tunnel of Hope, as Sarajevans had called it during the war. The tunnel was used for the transport of food, medical supplies and weapons.

“The tunnel was built over four months and four days, by simultaneous digging from both ends. The works were finished on July 30, 1993, when the diggers met beneath the airport runway,” said Edis Kolar.

The tunnel is nearly 720 metres long and between 1.5 and 1.8 metres high. It was dug using only shovels. The diggers used oil lamps well known to besieged Sarajevans, small bowls filled with cooking oil and a short wick.

The tunnel was extremely narrow, so groups of people took turns moving through it from each end. There were sometimes up to 1,000 people in the tunnel, while each man carried a backpack with about 50 kilograms of food.

During 1994, railway tracks were placed inside the tunnel for the easier transport of goods using small carts.

An average of 4,000 people passed through the tunnel each day. Due to constant Serb shelling and sniper fire, the transport took place at night.

Kolar recalled that grenades hit people waiting at the entrance three times. There were three massacres in which mostly civilians lost their lives.

“The siege of Sarajevo is one of the greatest crimes committed in Europe in the second half of the 20th century,” said Rade Radovanovic, editor of Belgrade daily newspaper Danas.

He said people in Belgrade and Serbia today remain silent about that crime, “as has been the case over the past two decades”.

“Those who know the truth about the siege of Sarajevo in Serbia are rare, they are the people who care about that truth,” said Radovanovic.

A crime against humanity

The International Criminal Tribunal for the former Yugoslavia in 2003 delivered its first judgment over the Sarajevo siege.

Stanislav Galic, the commander of a Serb corps which attacked Sarajevo, was pronounced guilty of crimes against humanity and sentenced to life in prison. The tribunal described the siege thus: “There was no safe place for Sarajevans – at home, school or hospital – from deliberate attack.”

Sarajevo has been recovering for years after the siege. Most of the buildings have been renovated and the city has been nominated for the title “European Capital of Culture 2014”.

“Sarajevo’s wartime history is really the living global present and future. Everyone has to finally realise we weren’t victims, but winners, which, at the same time, gives hope to humanity today united behind the saying ‘it’s too late for pessimism’,” said Suada Kapic, founder of the FAMA project, the largest collection of written, audio and video materials about the siege of Bosnia’s capital and events linked to the fall of the former Yugoslavia.

The collection is a testament to people who had enough energy and love to write books, create gardens, build families and live fully despite the possibility that every outing could have been their last.