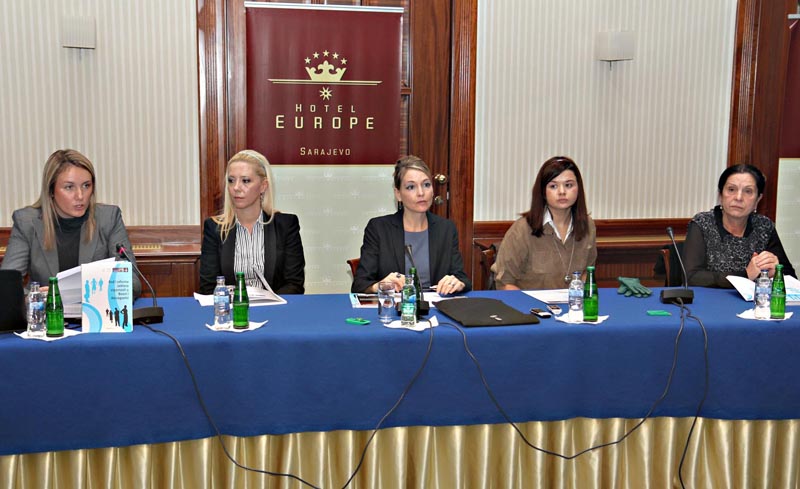 Gender Equality in the Security Sector

{artsexylightbox}Atlantic Initiative, Women to Women and Geneva Centre for the Democratic Control of Armed Forces (DCAF) have published, on 7th December in Sarajevo, a Report on Gender and Security Sector Reform in Bosnia and Herzegovina, as a result of annual work of those three organizations. The research was initiated in order to identify and highlight positive state and local practices that deal with gender issues and security sector reform, as well as to recognize the areas in which some further advancements are needed on these issues.

The report presents information and analysis of the current state of gender issue integration to Armed Forces, police, judiciary and penitentiaries. The report also examines the degree of implementation of national legislature and international instruments, relevant for dealing with the issues of gender equality in security sector, as well as with inclusion of gender issues in existing politics and practices. The report also deals with the role of organizations of civic society that are engaged in gender and security issues  and forms of cooperation they have with security agencies and institutions on all levels.

The results presented in the report stress an insufficient number of institutional policies, strategies and guidelines that are directly related to gender issues in Armed Forces, police, judiciary and penitentiaries in BiH. At the same time, a positive fact that Action Plan for implementation of UN Security Council Resolution 1325 was adopted in BiH in 27th July 2010 is highlighted. This Action Plan is a strategic document for integration of gender issues into the security sector of BiH.

– This is a first research of this kind in Bosnia and Herzegovina, and more than 300 people participated in it. The research was performed in all institutions of the security sector in BiH on a state, entity, canton and Brčko District level. We also held 12 consultations on a local level across BiH with different profiles of experts and representatives of civic society, whose work is related to gender and security sector. When the gender issues are adequately approached in the security sector, citizen’s trust in the system is strengthening and respect of human rights is secured as well. This also improves operational efficiency of security institutions. Thanks to the Gender Equality Agency of BiH, as well as gender centers, Bosnia and Herzegovina was the first country in the region to adopt the Action Plan for Implementation of UN Security Council Resolution 1325, and that, as well as other accompanying action plans, strategies, laws and bylaws means a great step towards the integration of gender issues into the security sector – said Željka Šulc from the Atlantic Initiative.

She pointed out that this was made possible because of the cooperation between the institutions of security sector and non-government organizations, that is manifested in the making of policies and efforts in providing of gender sensitive services, especially between the police and female organizations. The report gives a number of recommendations to all relevant institutions and organizations about how to improve gender equality and reduce discrimination in the security sector.

– For example, it is necessary to work on increase of number of women in the security sector. Although BiH has a fairly well developed legislation on gender equality, it is important to develop a continual practice of creation of institutional policies that will improve the implementation of the legislation, for example through books of regulations on cases of gender-related discrimination. It is also necessary to strengthen the mechanisms of reporting of discrimination for those employed in the institutions, as well as to secure their integrity during an inadequate treatment and discrimination. Our Report shows that the cases of discrimination are often not reported and that often discrimination is not recognized at all – says Šulc.

Kathrin Quesada  from Geneva Centre for the Democratic Control of Armed Forces (DCAF), that lead this process, emphasized that for them it was important that the whole BiH is included into research – from local to state level, and that the needs that concern the gender integration into security sector are recognized by local leaders, that is, decision-makers, “ and not that we, as an international organization, impose something as important.”

– In this phase we have recognized the achievements that were attained so far, and also some challenges that are ahead of Bosnia and Herzegovina in this sector – said Quesada, expressing satisfaction with the fact that DCAF’s set of 13 different documents about this topic that talk about how precisely can gender be integrated into the security sector reform, was translated into our language.

Majda Bećirević from the Atlantic Initiative and Memnuna Zvizdić, president of organization Women to Women talked about the importance of female participation in the security sector on the presentation. Bećirević said that it is recommended to improve the support of victims of domestic violence..

– A lot of work has been done on the Safe Houses, that now have a better financing system and a better support than before. But, the victims are still afraid to report the violence – said Bećirević.

According to her, it is important to establish a number, to introduce the share of women in administrative positions in the security sector, which would encourage women to apply.

Final publication with the results of research and recommendations will be passed on to the relevant institutions in BiH.