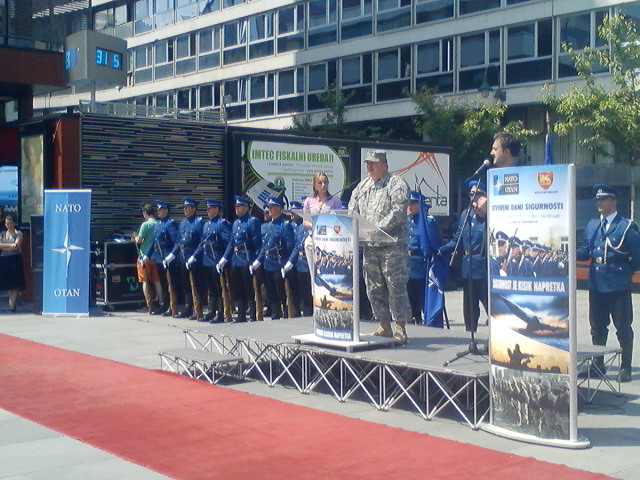 {artsexylightbox}NATO Headquarters in Sarajevo organized events designed to demonstrate the capabilities and capacities of national and international security forces.  The Open Security Days «Security is the Oxygen of Progress» were arranged in cooperation with the Ministry of Defense, the Ministry of Security, the Armed Forces of BiH, SIPA, the Border Police, the Federation Police, the Sarajevo Canton Police and the Professional Fired Brigade of the Sarajevo Canton.  The Open Days took place on May 31st and June 1st, 2011.

General David Enyeart, Commander of the NATO Headquarters in Sarajevo, opened the event.  Other keynote speakers included Uma Sinanović, Head of the Office of Public Relations at the Ministry of Defense and Ante Jeleč, Commander of the Operational Command of the Armed Forces of BiH.  Sinanović stressed the importance of acquainting citizens of BiH with the everyday tasks of security agencies, noting that providing information about the availability of such institutions is necessary for a secure future.  General Enyeart said that security is an essential element of any democratic society, and that the willingness of agencies participating in the Open Security Days to react quickly is a good indicator of progress that has been made in BiH.  Cooperation with NATO is yet another step towards successful security reform, and Enyeart argued that this process is inevitable in BiH.

The two-day Open Security Days program was held on the Square of the Children of Sarajevo, where all interested citizens had the opportunity visit various booths set up by the participating agencies and learn about their work.  Some of the specialized security equipment used by the agencies was even made available for guests to try out.  The Sarajevo Canton Police, the Armed Forces of BiH, the Border Police, SIPA and other agencies gave demonstrations of their work.  The Border Police’s detection dogs were an especially popular attraction.

A roundtable focused on Euro-Atlantic integration and BiH was also organized during the two-day event.  General Enyeart spoke with students from the University of Sarajevo about the challenges of NATO accession and explained the advantages of membership.  The roundtable was open to all interested participants and included a short informational video.

For more information about this event, please visit our website.