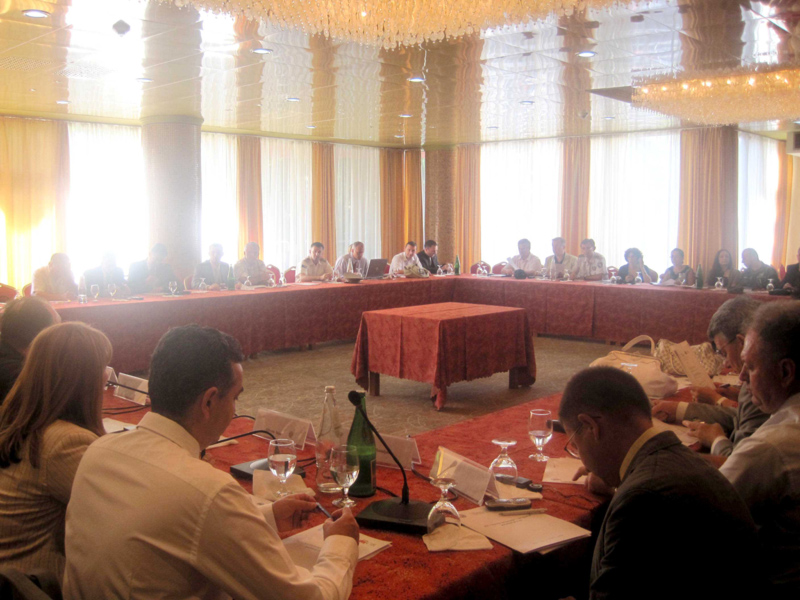 On the same Path to the Euro-Atlantic Family

{artsexylightbox}On September 13th in Banja Luka, the George Marshall Centre Alumni Association of Bosnia and Herzegovina (MACCBiH), in cooperation with the Centre for Security Studies and the Centre for International Relations, organized a roundtable focused on “EU and NATO Integration – Separate or Parallel Processes”. The President of MACCBiH, Ankica Tomić and General Gary Huffman, Commander of the NATO Headquarters in Sarajevo, opened the event. Both individuals pointed out the importance of a roundtable about EU and NATO integration, which according to Commander Gary Huffman is an important step necessary for enhancing dialogue regarding this topic.

During the first panel, Prof. Matthew Rhodes, of the George Marshall Centre, stressed the four most important points of EU and NATO integration processes.  These apply not merely to the old member states, but also to the aspiring countries. He went on to highlight the complementary nature of these two processes. On the one hand, they accelerate the reforms undertaken in the countries. On the other hand, the acquis communaitaire of the EU integration process slows down the processes. Thus, in most cases NATO integration advances more quickly than accession to the EU. Moreover, he discussed the notion of enlargement fatigue.  This has been a dominant theme in the context of the global financial crisis and questions of EU integration.

Prof. Mile Lasić, from the Faculty of Philosophy at the University of Mostar, stressed his belief that Bosnia and Herzegovina cannot initiate reforms alone due to a lack of experience with “real democracy”. He requested a simplification of the procedures for BiH to obtain candidate status to the EU. Prof. Živanović, Faculty of Philosophy, University of Banja Luka, argued that most ordinary people have become entirely indifferent towards the integration processes because they are living on the subsistence minimum. Furthermore, he argued that the part of the population that is going to vote in elections forms the most conservative segment, whereas those who do not vote are actually the most progressive people. He stated that research on representation of aspects that are connected to EU and NATO integration processes in print media has shown that merely three per cent of the topics in print media are dedicated to those aspects. Out of these three per cent, over eighty per cent are news about official visits and do not deeply elaborate on the issues of integration processes. He stressed that there are more rather secret, subtle changes occurring within society that are unrelated to public reform attempts. The General Consul of the Republic of Croatia in Banja Luka, concluded the first panel by elaborating upon the EU integration process and the challenges it posed to Croatia by giving recommendations to the audience not to repeat Croatia’s mistakes.

The second panel discussed whether Euro-Atlantic integration is composed of two separate processes, or whether it is rather two phases of the same process. Darija Ramljak, Assistant to the Director of the Directorate of European Integration (DEI), emphasized that Bosnia and Herzegovina has been and is still losing millions from EU-funds due to the slow adoption processes of crucial laws such as the law on census and the law on state aid control.  According to Ramljak, Bosnia and Herzegovina is the only country in Europe that has not adopted a law on census and conducted a census. The lack of census data yet is of utmost importance due to the corresponding availability of EU-funds for the country.

Following the second panel, a discussion took place that touched upon several economic and political issues concerning the two integration processes. The complementary nature of the Euro-Atlantic integration processes shows that countries aiming at accession to one association will benefit in both cases, even if one integration process might advance faster in temporal terms than the other one due to specific conditions and criteria.

Yet, the accession to NATO or the European Union does not automatically mean that a country becomes a member of both organizations. The majority of countries that are members of the European Union are also NATO members. Nevertheless, some are not, such as Austria, which is in the NATO partnership program, or Sweden and Finland, which wanted to preserve their military neutrality so they decided to stay out of the North Atlantic Treaty Organization. There are other countries that are not EU but NATO members. Among them are, for instance, Norway, Turkey and Iceland, and Albania and Croatia, which recently joined NATO and are also firmly devoted to EU accession. Croatia is set to join the EU in 2013.