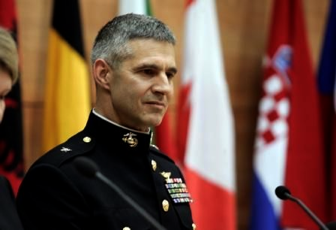 What are the biggest obstacles for Bosnia and Herzegovina’s path to NATO and MAP?

The question is not if, but when will B&H become a member. Your leaders have recognized the value of NATO offers- it is an investment for future. NATO is not just a political-army alliance that guaranties stability and safety, but it also contributes to economical growth, better standards and a better picture of the country in general.
Bosnian political leaders must agree on unitary approach that will able Bosnia and Herzegovina not only to make decisions but to transact them as well. When you reach that stadium, everything else will fit into place. The selections should not be an excuse for enabling reforms. If you let that happen, next year B&H will find itself in the same position as today.

We have been warned by Brussels as well. But can you specify, will the question of Constitution reforms present a problem for Bosnia and Herzegovina to enter NATO and MAP?

NATO does not want to interfere in the questions of Constitution. What it wants from B&H as a member is for it to be able to discuss with other member countries about complex security issues. Many of the member states of NATO are also multiethnic, but they are capable to sit and discuss their view on national interest as a member.
NATO expects that every country has a compatible army, state’s administration that is capable of making and transacting decisions and to cherish the democratic values within the rule of law.

How do you comment the discontent among Bosnian politicians concerning the MAP rejection?

The message was clear throughout the whole series of processes that were done last year. In June PIC spoke about the future, in July the NATO General Secretor Jaap de Hoop Scheffer visited, who spoke about the path of future again, then the visit of new General Secretor Rasmusen, then States vise Secretor James Steinberg came to Bosnia and Herzegovina three times, then Carl Bildt…

Realisticaly speaking, when is it possible to expect that B&H will receive MAP?

That decision is made by the NATO members.

Do you think that B&H should increase its involvement in peace missions?

Every type of contribution is looked upon with approval and every type of contribution to security, for example in Afghanistan is appreciated. Minister of Defense Selmo Cikotic sad that we are not expected, but we should involve ourselves more into NATO operations. B&H is considering several offers from different member states to be included in the operations. The institutions of B&H will choose which operations they want. Also, B&H has offered a donation to Afghanistan security forces – 60 howitzers, 15 000 AK-47, and around thousand machine guns. It is a very generous offer.

What are the possibilities for selling our redundancy of weapons, regardless of their shelf life, that way solving our problem and entering NATO?

Many people think that you can even earn while solving this problem. You can’t! You must destroy these weapons within the existing facilities here in B&H. In B&H there are capacities that allow 3000 weapons to be destroyed over a year. In 2008 around 2000 tons were destroyed, and in 2009 around 1200 tons… This process should continue in this direction.