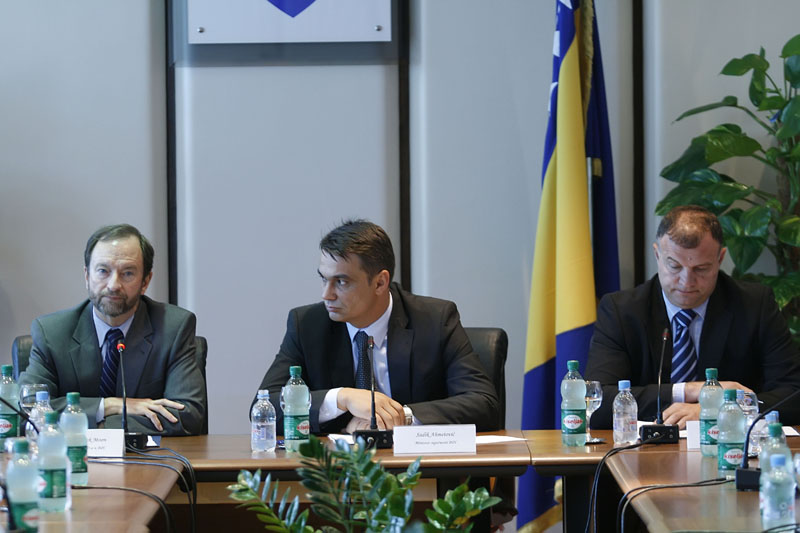 Recent release of the U.S. government’s 2011 report on human trafficking in BiH and the presentation of the results of the SUSTAIN project

{artsexylightbox}The authorities of Bosnia and Herzegovina are in full compliance with the minimum standards for eliminating human trafficking, with continuous efforts visible in improving law enforcement and victim protection. However, the authorities of Bosnia and Herzegovina have not been proactive in identifying the victims of human trafficking, which has likely led to the conviction of many victims for the unlawful acts they were forced to commit while being trafficked.

This disclosure, among others, is stated in this year’s annual report on human trafficking released by the United States, which was presented on June 28th at a press conference at the Council of Ministers of BiH in Sarajevo. The results of the “Sustainable Interventions to Combat Human Trafficking in Bosnia-Herzegovina” (SUSTAIN) project were also presented. The project has been implemented by Catholic Relief Services (CRS) through the financial support of USAID since August 2008.

Furthermore, the report notes that NGOs have found that corruption associated with trafficking significantly impedes the ability of authorities to vigorously prosecute acts of human trafficking and to identify and protect the victims. The U.S. government recommends that the government of BiH investigate all potential cases of human trafficking, to ensure that violators are prosecuted and punished, and that identified victims are not penalized for having been subjected to trafficking. A multi-disciplinary approach to trafficking is proposed, which concentrates on the victim, with improved responses possible through partnerships with specialized NGOs capable of identifying victims and providing assistance.

Recommendations for improved investigation and prosecution

This year’s annual report included numerous recommendations for improving the government of Bosnia and Herzegovina’s ability to combat human trafficking. Bosnia and Herzegovina is encouraged to rigorously investigate and prosecute corruption that enables human trafficking; to improve the legal mechanisms for protection of the victims; and to ensure that victims are not deported from the country or involuntarily repatriated before a period of review is possible. The training of law enforcement officials and other relevant actors in combating human trafficking is also recommended, especially for those who are the first responders in cases of suspected trafficking. A comprehensive national campaign is also advised, in order to educate the public about human trafficking and thereby diminish participation in the local sex industry.

U.S. Ambassador to BiH, HE Patrick Moon remarked during the presentation of the report that, last year, BiH made significant progress and that as a result it ranked in the first category for the first time, meaning the government is in full compliance with the minimum standards of the Law on the Protection of Victims of Human Trafficking. It is equally important that Bosnia and Herzegovina retained its Category One designation for the year 2011. Although this is a great achievement, countries designated as Category One cannot become complacent and must continue to increase their efforts to combat trafficking. We hope that BiH will maintain its Category One title through next year. Just a decade ago, Bosnia and Herzegovina held the lowest ranking, Category Three, which carries with it the potential suspension of certain types of assistance from the U.S. government. Moon recalled that, in 2001, the U.S. State Department asserted that the government of Bosnia and Herzegovina did not invest in prevention or undertake protective measures against human trafficking, with the result that victims were routinely accused of prostitution and illegal residency and then deported. During the past ten years, as the U.S. ambassador highlighted, government officials and legislators in Bosnia and Herzegovina undertook reforms to tackle these problems, culminating in the amendments to the State Criminal Code in 2009. Through this process, the State Criminal Code was aligned with the Palermo standards, thereby leading to the ascension of BiH into Category One.

To build on this momentum, Moon emphasized that entity governments and the Brcko District Government need to harmonize their laws on combating human trafficking with the State Criminal Code, to ensure that all victims of trafficking are properly identified and protected. “As other Category One countries, Bosnia and Herzegovina must remain vigilant with regard to resolving these remaining issues of human trafficking,” said Moon. In particular, Moon noted the contribution of Amela Efendic from the International Solidarity Forum (EMMAUS), who was honored in Washington by U.S. Secretary of State Hillary Clinton as a hero in the fight against human trafficking a few days ago. Efendic is the head of one of the most important shelters for victims and a key adviser on the rights of victims to the Peak Group for Combating Trafficking. According to the American ambassador, Efendic has worked tirelessly to advocate for a victim-focused response to human trafficking. Moon congratulated Bosnia and Herzegovina for the continuing efforts in the struggle against trafficking.

The Minister of Security of BiH, Sadik Ahmetovic, said that the politics of Bosnia and Herzegovina on fighting human trafficking are based on principles of respect and the protection of human rights, with an emphasis on prosecuting traffickers, protecting victims, and preventing the spread of trafficking. Of significant value is the fact that all actions are undertaken through the collaboration of the governmental and non-governmental sector, and in cooperation with international organizations and other countries. Ahmetovic said that the commitment to cross-sector cooperation has resulted in a series of successes. Evidencing these achievements are the increased number of successfully conducted investigations, indictments, and convicted traffickers, as well as the number of victims identified and rescued. Measures of support and assistance have also been established and implemented for victims of trafficking.

Minister Ahmetovic marked the occasion by recalling the process that initiated and propelled anti-trafficking reforms. “It gives us great pleasure that the U.S. government has recognized our efforts and results in the fight against human trafficking, and that the State Secretariat has ranked us among a select group of countries that has managed to maintain successful progress in this field for a second consecutive year. Not so long ago, in 2004, Bosnia and Herzegovina was in the third category, a situation that imposed very severe restrictions on bilateral relations between BiH and the United States. Thanks to the efforts that were invested by Bosnia and Herzegovina’s competent authorities and NGOs, the situation in BiH has changed. From their inception, human trafficking reforms had an immediate impact on BiH’s international standing. With the beginning of the reform process, Bosnia and Herzegovina quickly moved into the group of countries under special supervision. With every improvement, BiH improved in status, a process that culminated in last year’s move to Category One. This year we recognize that we have retained our spot as a Category One country, but we also renew our commitment to continuing the fight against human trafficking, the slavery of modern times. In addition to continuing efforts against sex trafficking, special attention will be placed on combating the trafficking of children, ranging from pornography to forced labor, which is manifested in Bosnia and Herzegovina in forced and organized begging and other illegal activities.”

The director of CRS in BiH Jake Hershman explained that Catholic Relief Services is a religious organization founded with the goal of connecting with the poorest and most vulnerable in the world. Hershman detailed, “Because human trafficking affects the most vulnerable in our communities, it is natural for the CRS to run a program that works to combat this problem in Bosnia and Herzegovina and in the world. As a U.S. organization, CRS is grateful to have the privilege of being part of a program that helps achieve the main goals of the U.S. government. In BiH, it is to reduce and hopefully eliminate trafficking in Bosnia and Herzegovina and abroad. The aim of the SUSTAIN project is to strengthen the capacities of the BiH government to combat human trafficking and implement a national action plan so they will develop a systematic and sustainable approach. To achieve this goal, CRS works closely with the Anti-Trafficking Department as well as educational institutes and social work centers throughout Bosnia and Herzegovina, in order to bolster their capacity and improve the sustainability of their efforts to combat human trafficking.”

Manager Larisa Klepac presented three manuals developed under the SUSTAIN project. Klepac argued that the project is implemented in three areas: the prevention of trafficking; the improvement of protections for victims of human trafficking; and the implementation of national action plans and national referral mechanisms. In cooperation with the cantonal and entity Ministry of Education, as well as educational institutions, a training model was developed for high school teachers to enable the further education of students on the topic.

Klepac elaborated, “During the past two and a half years, 674 teachers from 275 secondary schools from both entities were trained on the prevention of trafficking. Although the project focused on high schools, we were able to include 107 primary schools, from which we have trained 188 educators in the same training model. The Ministry of Education in six cantons (West Herzegovina, Herzegovina-Neretva, Sarajevo, Tuzla, Una-Sana and Posavina Canton) and Brcko District have so far officially integrated lessons into the curriculum, which means that as of next school year, 128 secondary schools will have mandatory education on prevention of trafficking. The remaining four cantons and Republika Srpska are in the process of integrating prevention education, and I hope that it will be completed by the end of the year.”

The U.S. State Department report on human trafficking, which was launched in June 2010, noted that the Bosnian government has made significant progress over the past two years in its efforts to implement the Law on Combating Human Trafficking. Since then, one of the largest penalties for trafficking was delivered to Tasim Kučević. A major human trafficker, Kučević was sentenced to twelve years in prison, fined $14,286, and had funds seized from him amounting to more than $204,600.