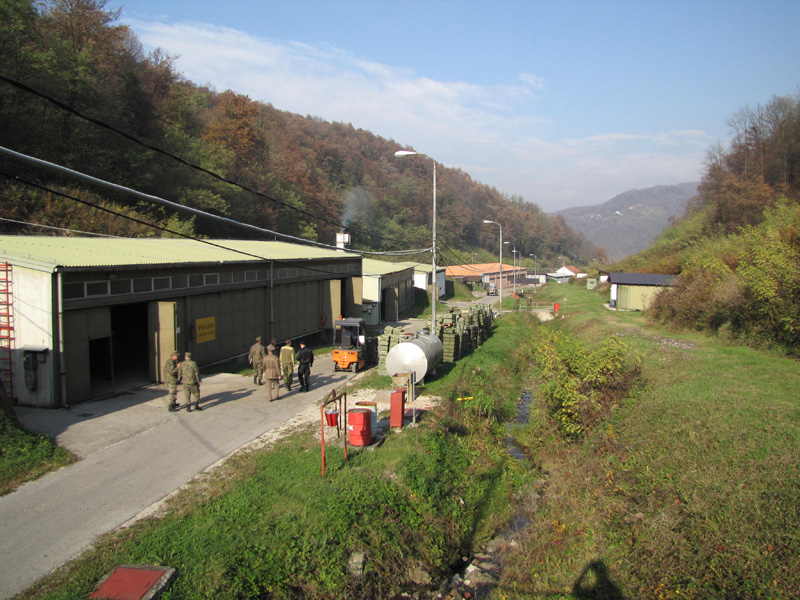 In anticipation of the political decisions concerning the 69 military sites

{artsexylightbox}Of the 69 military sites that must be registered to the state of Bosnia-Herzegovina, one-third of usable military sites are almost completely ready for entry into state ownership. According to the conditions set forth in April 2010 at the informal ministerial meeting in Tallinn, the successful registration of military sites to the state of Bosnia-Herzegovina will initiate Bosnia-Herzegovina’s action plan for membership in NATO (MAP). Military sites are comprised of barracks, shooting ranges, military training grounds, airports, radar sites, and warehouses, and once belonged to the JNA. With documentation on these sites now ready, from the perspective of the law, these military sites are now under the jurisdiction of the national level. All that remains is the definition of the boundaries of these sites and the political determination for entry into state ownership. For all other sites, paperwork is still being compiled.

These findings have been arrived at by NATO Headquarters in Sarajevo, whose representatives visited all locations with representatives from the Ministry of Defence and the Joint Staff of the Armed Forces. After conducting the direct examination of sites and reviewing available documentation, representatives drafted a preliminary analysis of the prospective military sites, in which legal matters and issues of infrastructure were addressed.

The Ministry of Defence noted that the document is currently subject to further analysis, as it considers other aspects that will enable a comprehensive approach and an improved final proposal, with the conclusive product expected in the next two months. The Assistant Minister for Policy and Planning of the Ministry of Defence, Ahmet H. Omerović, stated that the usable sites would be used only for the purposes of defence. As highlighted by the Ministry of Defence, usable sites would be made available for certain types of civil-military cooperation and for use by local civilian governments only if these needs do not affect the defence capabilities of the Armed Forces.

The Deputy Commander of NATO Headquarters in Sarajevo, Lieutenant Colonel John Andreas Olsen, who visited all sites with advisers from NATO and BiH Armed Forces, says that representatives of the Ministry of Defence gladly accepted the invitation to tour the facilities. The ultimate goal is to assist the Ministry of Defence register military properties. Before this can be accomplished, however, it is necessary to resolve technical and infrastructural issues, through the support provided by the department within NATO Headquarters in Sarajevo headed by Rohan Maxwell.

The military facilities are located within both entities: one-third of them in the Serbian Republic, two-thirds are in the Federation, and in the District of Brcko, there are no usable immovable military properties. Maxwell affirms that he wants to help Bosnia and Herzegovina, at a critical time with the political decision being posted, to avoid wasting time on legal and technical issues. Unfortunately, Bosnia and Herzegovina has failed to fulfill the conditions outlined in Tallinn last year. Even so, in September 2010, it started the Annual National Plan (ANP) derived from the MAP. At the time, it was stated that the matter could not be resolved because of the election campaign. As now asserted, the main reason for which the conditions have not yet been fulfilled is that Bosnia and Herzegovina still lacks a new national government, nine months after elections.

For this reason, NATO has decided to do everything in its power to at least partially make up for lost time. If politicians reach an agreement, this means Bosnia and Herzegovina will manage to fulfill the conditions of the MAP through September.

“The Ministry of Defence, the Joint Staff OSBiH, and the Public Defender’s Office organized a workshop to summarize what is needed and how to collect documentation. We will, if necessary, continue doing fieldwork, to resolve remaining issues. This process is supervised by the Ministry of Defence, and we are only there to help,” says Olsen. He also emphasized that his impressions of the current situation are mixed but mainly positive.

A number of buildings from the list of 69 sites visited are outdated and require significant investment to put them in order, while other buildings are in good condition.

When asked whether there might be other problems in Bosnia and Herzegovina for which this issue remains unsolved, Maxwell recalled his experiences in 2005, when the BiH Law on Defence was created.

“There are different opinions. There are those that are not helpful. I’m not referring to only one side of the inter-entity boundary line. This requires a serious political discussion. However, we all know that this is not a priority for any prominent political leader at the moment. When it becomes a serious issue, we know that it can be resolved and we will definitely be available to help them. You know that there were other serious questions, including the unification of the armed forces. So, it is possible to accomplish matters if all parties are serious. As for the documents that need signing, the legal agreements, 90 percent of that has already been resolved. There are only a few minor details that need to be finalized. They know it, of course. It is no secret to anyone, and when they are ready to sit down together, it will be possible to solve it,” states Maxwell. Ambassador at the Ministry of Foreign Affairs and member of NATO’s coordination team, Fuad Šabeta, notes that, actually, no substantial problem obstructs BiH’s path toward membership in the alliance. He reminds us that the Presidency in 2003 clearly defined the priorities of BiH foreign policy—membership in the European Union and NATO. The state administration made identical statements as early as 1997.

“When we started working together in the Ministry of Foreign Affairs, and when the Presidency began meeting regularly, there were the same priorities. We, in the Foreign Ministry and other institutions that carry out the decisions of the Presidency, as the competent authorities, have not had any problems or obstacles in this. Nor, have I in all these years at the Ministry felt such obstacles. The second question regards policies and statements by individual politicians, especially concerning NATO, which are made daily for political purposes. But generally there was never a problem in the execution of these tasks,” says Šabeta.

He emphasizes that the decision to post 69 sites should probably ultimately have been made by the Presidency of BiH. However, at the moment, there remains a delay and no initiative to solve this problem, Šabeta says, due in large part to the issue of the still-unformed Council of Ministers, although this is only one body among many that must deal with this matter.

“The problem is that the clock is ticking. The North Atlantic Alliance works on a rhythm similar to that of a school year, which means that a new cycle of MAP begins in September. However, I sincerely hope that there will also remain the opportunity to start the MAP in October, because we were very good in the previous Individual Partnership Action Plan (IPAP). But if it is delayed too much and shifted to next year, then we would certainly have to wait another year, which would be a great loss. Hopefully, the next priority, after the formation of a government, will be the resolution of the status of these properties, because political decisions regarding full membership in NATO are already there. Another question concerns the final decision on membership – which, however, we must wait on for a few years – regarding which to choose: whether to go to parliament or conduct a referendum. But it is important to work, for the benefit of the state, entities, and all of us, to enhance the capacity of institutions to work with tools that, among other things, are provided by the North Atlantic Alliance,” Šabeta said.

Fortunately, says Šabeta, a new tool that is being used in MAP is no longer the IPAP but the ANP.

“NATO’s coordination team was able to prepare the ANP for 2010 and 2011. Unfortunately, we could not use it because we were not formally in MAP. As for the executive part, we are ready and have finished a new tool. We are prepared to send an annual plan to Brussels at the moment politicians conclude their decision on the sites. The plan is a bit different than this tool. To say it simply, with the Partnership for Peace (PfP), you are planning most of the activities yourself, with NATO’s support; with the ANP, there are more requirements and conditions originating from NATO. Thus, NATO sets the pace and outlines the activities that are needed and must be fulfilled. The question is always posed regarding how many years are needed to shift from being a MAP country to a full member of NATO. Croatia, for example, spent seven years as a MAP country. I think that with Bosnia and Herzegovina, it will not be like that. If political conditions are fulfilled, we could be able to accede more quickly, since all the rules and laws that have been adopted since 1996 are in accordance with the laws required by NATO, so that a lot has already been done,” asserted Šabeta.

In 2006, the Presidency made the decision on the size, structure, and locations of the military sites of the Armed Forces, of which 69 have been declared usable. In the list, among others, are airports such as Dubrave (Tuzla), Mahovljani (Banja Luka), and Ortiješ (Mostar); Camp Butmir; barracks including Ante Bruno Busic (Livno), Božan Simovic (Capljina), the 7th Muslimanske Brigade (Zenica), Zarko Zgonjanin (Prijedor), Rajlovac (Sarajevo), Miloš Obilić (Pale), Mika Bosnic (Banja Luka), Buti (Sarajevo), the 3rd May (Doboj), Travnik, and Zaim Imamović (Pazaric); radar sites including Okresanice (Srebrenik), Jahorina, Kozara, Velez, and Tušnica (Tomislav Grad); stationary communication nodes such as Lisina (Prijedor), Čubren (Kiseljak), and Opaljenik (Travnik); objects including Konjuh (Kladanj), Svinjar (Prnjavor), Veliki Žep (Han-Pijesak), Kmur (Foca), Leotar (Trebinje), Lebrešnik (Gacko) (not property of OS), and Velika Gomila (Bihac) (not property of OS); the home of the Armed Forces of BiH in Sarajevo, Velika Mahnjača (BiH); the seat of the BiH Armed Forces Joint Staff Bistrik; the Operational Commands at Butmir; and the OS support office at the Kozara barracks in Banja Luka. Unless all these facilities are registered as state property, further progress for Bosnia and Herzegovina toward NATO membership is not possible.