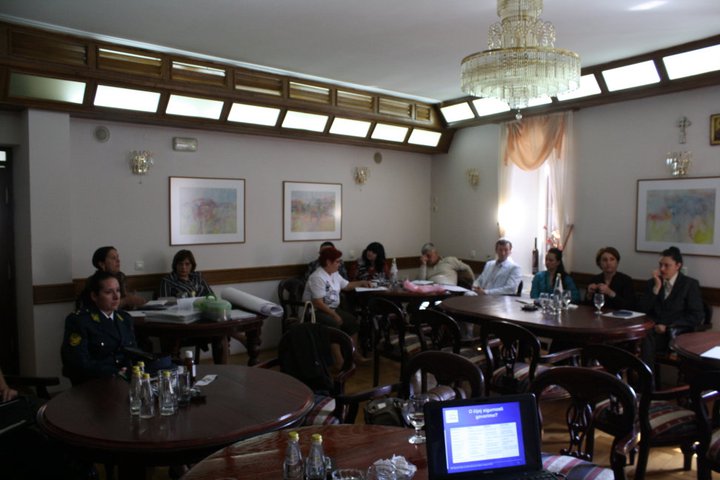 Between February – April 2011 the Geneva Centre for the Democratic Control of Armed Forces (DCAF), and two BiH non-governmental organisations – Žene Ženama and the Atlantic Initiative held ten local consultations on gender and security sector reform in Bosnia and Herzegovina. The consultations were conducted within the project ‘Needs assessment on gender and security sector reform in BiH’ conducted jointly by all three organisations. The methodology of the needs assessment was organised using different methods – thorough desk research including analysis of national and international policy documents and individual interviews with key stakeholders in security institutions at the central, entity, cantonal and Brcko district level.

This article focuses on the third stage of the process – local consultations with policy, army, judiciary, organisations of civil society, municipal authorities and prison representatives in East Sarajevo, Zenica, Srebrenica, Bijeljina, Brcko, Pridor, Cazin, Trebinje, Mostar and Livno. Here the key insights and highlights from the discussion that took place during last three consultations in Trebinje, Mostar and Livno are considered. The focus of the consultations was a presentation and discussion of a draft report containing data and analysis on the current state of integrating gender in the armed forces, police, judiciary and penal institutions. The consultations were a unique opportunity to discuss and refine the key findings, as well as incorporate additional information and recommendations from local stakeholders: security institutions and local government representatives and CSOs. In addition the local consultations were a platform to recognise local actions and identify obstacles and opportunities for achieving gender equality and the integration of gender issues in security sector reform. The outcome of the needs assessment and local consultations could have consequences for BiH government institutions and donors in mainstreaming gender in security sector reform and in developing more gender-responsive policies and practices in BiH.

Each local consultation was organised by the local partners of Žene Ženama; (in Trebinje, the Citizens Asociation ‘Oaza’, in Mostar ‘BiH Women’, and in Livno ‘the Centre for Civic Cooperation’). In all three towns we had the pleasure to welcome representatives from the police, border police, army, EUFOR LOT teams in BiH, civil society organisations, prisons and social work services. The representative from the judiciary was only present in Mostar. The participants overwhelmingly agreed with the preliminary findings and provided a variety of constructive inputs, complementing the data with some of their personal experiences as employees of security institutions.

In groups we discussed the low representation of women in the armed forces and police, approximately 5.4% and 6.71 % respectively. These figures need to be considered with care as most women employees occupy administrative, rather than operational positions in the security sector. Even though participants in the consultations did not see any formal barriers to greater participation of women a number of informal and contextual barriers were highlighted. For instance, with women only recently stepping up to join the armed forces it will take time for them to build their carriers and occupy leading positions. Some participants expressed the view that women lack sufficient ambition to apply for these positions. However further discussion lead to the conclusion that women are reluctant to apply for senior management positions only because of the challenges involved in balancing their family and professional lives. Employed women in BiH overwhelmingly operate within the framework of traditional female roles in which women have far greater responsibility for child care and household duties compared to their partners.  Culture and tradition, compounded by the lack of affordable and flexible childcare options would mean great sacrifices for women in top positions and thus many opt to perform less demanding jobs. On a positive note several women in our consultations, who do currently occupy senior management positions in security sector, enjoy the respect and authority given to them by their subordinates and colleagues. There were several suggestions as how to increase the numbers of women in management and senior operational positions in the security sector. One approach is to actively encourage women to apply for management positions in security forces. In addition the challenging of gender stereotypes needs to happen early on in the education system which could be geared to giving greater prominence to the professional rather than the domestic roles of women.

The consultations also addressed the needs of service users in the security sector. Here we wanted to find out more about cooperation between police and judiciary in addressing issues of gender based violence. The initial reaction was that while the police and judiciary cooperate well in processing cases of family violence, the problem is that women tend to drop charges and return to their partners who continue to physically and emotionally abuse them. The reasons why women do this lie in their economic dependence on men, the shame and stigma attached to being a victim of domestic violence, as well as the lack of appropriate mechanisms of protection. Where support is available it often comprises the victim being offered refuge in a safe house, however the price of this is being dislocated from their own home. A majority of our participants saw this arrangement as unsuitable, arguing that this practice further disempowers victims. Instead they expressed the opinion that it is the perpetrator who should be the one to leave the family home.

An important issue to emerge during the consultations concerned confusion around the concept of gender.  There were some who did not see the need to acknowledge the difference between sex (biological characteristics) and gender (the socially and culturally constructed roles of women and men). In addition the Bosnian/Croatia/Serbian translation of gender as rod was highlighted as not altogether appropriate, since the word rod not only used to define blood ties and relationships but is also used for different army ranks. Due to these multiple meanings and because the concept of gender has not taken root in BiH society there were suggestions to simply adopt and use the English word ‘gender’ instead of the local linguistic form rod.

1  Dr Majda Becirevic is research consultant for the Atlantic Initiative on the project Gender and Security Sector Reform in Bosnia and Herzegovina.