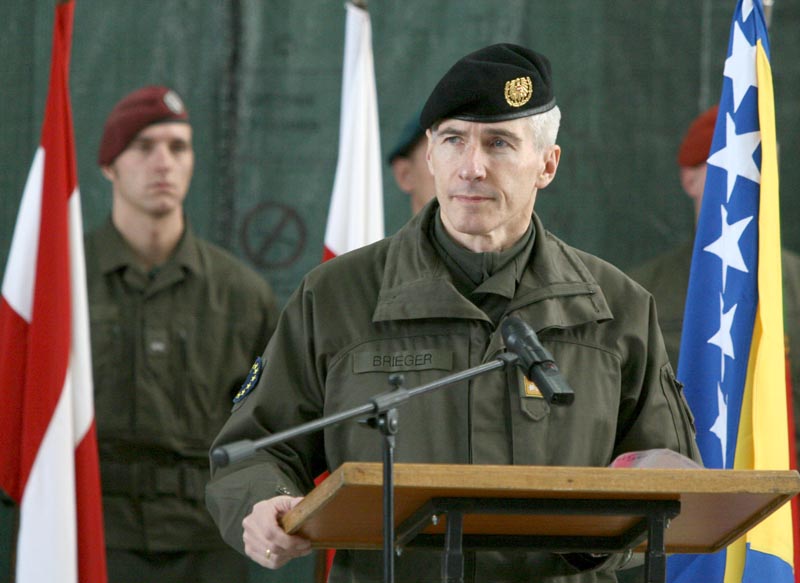 {artsexylightbox}At a ceremony in Camp Butmir, on 6 December 2011, Major General of Austrian Armed Forces, Robert Brieger took over the EUFOR Command from his fellow citizen General Bernhard Bair, who was the head of European Forces in Bosnia and Herzegovina for the last two years.

General Brieger’s mandate will be characterized by new tasks. The main job will be training and raising capacities of Armed Forces of BiH (AFBiH), as well as developing reserve forces which will be located outside of BiH and at EUFOR’s disposal in possible crisis. The number of EUFOR soldiers has been decreasing every year. When General Bair took EUFOR command in 2009, European forces in BiH consisted of 2,500 troops. Today, there are only 1,200. ALTHEA EUFOR Operation Commander, General Sir Richard Shirreff announced that this number would probably be cut in half.

His view of future EUFOR engagement is interesting:

EUFOR troops decreased in size and will continue. A part of the reason for that improvement is secure and stable environment in BiH, therefore, the evolution of this operation respect of its form and size is right. I, as an operations commander, have an obligation to make sure that this operation remains relevant and continues providing an appropriate level of security in BiH. My assessment is that we can achieve that with a smaller mission, and you will see that in the next months its focus will shift more towards capacity building and training AFBiH. All this is connected to assistance in improving capacities and professionalisms in AFBiH, which will result in increasing stability in BiH.

Then Shireff said that there were two other relevant elements of the new organization.

– Firstly, we will keep the very capable matrix for maintaining the overview of the situation distributed all over BiH, because it is extremely important to be informed on time about changes or possible crisis. My assessment is that we can do this with significantly reduced forces. I wouldn’t like to mention some figures now, but we can say that it would be with about half of the size of the troops we currently have in the country. It is important to note here that we have to have very qualified, respectable reserve forces which are capable of responding extremely fast to any crisis in BiH, deploying quickly and assisting the BH authorities in keeping safe and stable environment. We are now talking with EU member countries on what size of engagement each of them is ready to offer within such a mission. Finally, it will again be up to me to give my assessment whether the final result of such talks is a mission which is applicable and credible, although from this point of view I could say that it is a realistic option I intend to present to higher instances in EU – said Shirreff.

At the ceremony he talked about the future direction of SFOR activities, as well as disappointment due to non-establishment of the Council of Ministers of BiH:

– EU support to ALTHEA operation will continue and evolve to contribute to increasing stability in BiH. Still, it is disappointing that we don’t see political progress in BiH, which disturbs the efforts towards Euro-Atlantic integration. As everyone else, I also want to see the end of foreign missions in BiH, but we will only leave when a political solution is achieved which is acceptable to all sides, and not threatening to the stability of the region. In order to support the achievement of political goals, EUFOR will change. Together with EU Special Representative and Head of EU Delegation in BiH, Ambassador Peter Sorensen, we are determined to act within a comprehensive plan to help BiH fulfill the requirements for Euro-Atlantic integration. Our partners in NATO and OSCE, as well as our partners in bilateral cooperation will help us build capacities in state institutions, and EUFOR will especially assist AFBiH in developing modern forces capable of conducting operations, hand in hand with Euro-Atlantic institutions.

Ambassador Sorensen, who gave a speech in Butmir on behalf of EU High Representative for Foreign Affairs and Security Policy Catherine Ashton, reiterated that EU remained completely committed to European perspective of BiH. The proof is increased EU presence in BiH, which includes EU Delegation, EU Special representative, and missions within joint defense and security policy.

– We give our support with clear commitment to territorial integrity of BiH as a sovereign and united country. ALTHEA Operation still plays an important role in BiH. Several times EU confirmed that ALTHEA operation is the key part of the total strategy and presence of EU in BiH. In that sense, in October, the Council decided to extend the EUFOR presence, and the mission will continue to provide executive military support to BH efforts on keeping secure and stable environment. In November, UN Security Council extended the ALTHEA Operation executive mandate for another year. These are important decisions, because ALTHEA continues to act as stabilization and deterioration factor against return to conflicts and violence, said Sorensen.

Handing over the EUFOR Command, General Bair said that, due to its history, BiH was a complex and politically sensitive place for commanding international military forces.

– As a commander, I always tried to show EUFOR’s commitment to people of Bosnia and Herzegovina. In that sense, the following was important for me: EUFOR contributed to safe and stable environment in order to provide normal living conditions in accordance with EU standards. It strengthened the AFBiH capacities through efforts in training, and in accordance with the best international military practice. EUFOR has had relevant and positive influence in civil aspects of life in this country, putting, for example, at disposal its air capacities for search and rescue operations, and other projects. For me, it was especially important that EUFOR was looking towards the future and using its resources to bring young people from different ethnic groups together – said Bair, expressing his satisfaction with the fact that EUFOR has great support of the citizens in BiH and respect of all peoples.

Bair paid respect to the Armed Forces of BiH “with whom, through the efforts on capacity building and training, we got closer to and whom we respect as partners.”

– AFBiH proves what can be achieved in this country through a unified approach and gives example everyone should follow. I would especially like to thank my dear friend, Lieutenant General Miladinu Milojčiću, Chief of Joint Staff AFBiH for his pragmatic and valuable cooperation with EUFOR. I would like to express my deepest gratitude and respect to my people in EUFOR. EUFOR soldiers come from 25 different countries. These multiethnic, multicultural, but unified forces have at any moment been ready to respond to any threat to safe and stable environment and help local authorities in every possible way, said he.

The new EUFOR Commander, General Brieger is also aware of the challenges EUFOR is facing, as for using scarcer resources to give credible contribution to safe and stable environment. According to him, capacity for using military means must and will be guaranteed, in which reserve forces will have increasingly more important role.

– I am totally aware of the responsibility I have for all my soldiers and civil personnel. Commanding the soldiers from 25 countries requires a high level of cultural awareness for EUFOR to successfully execute its missions and tasks. For that, I would like to pay respect to all participating countries and their soldiers who are ready to give their contribution to European security and defense policy in this part of Europe. I am asking the EUFOR soldiers and civil staff to persist in their commitment to peace and security in this beautiful country. All citizens of BiH deserve our respect and undivided dedication. I see EUFOR continuing to help the progress on peaceful way towards multiethnic, democratic BiH, within Euro-Atlantic structures – said Brieger.

Austrian armed Forces are the largest part of EUFOR with 350 soldiers and they replaced some soldiers from Italy and Spain who left Bosnia and Herzegovina – because of support to ISAF Mission in Afghanistan – just as the soldiers from Germany. That is why General Shirreff gave special recognition to Austria which appointed EUFOR Commander for the second time.