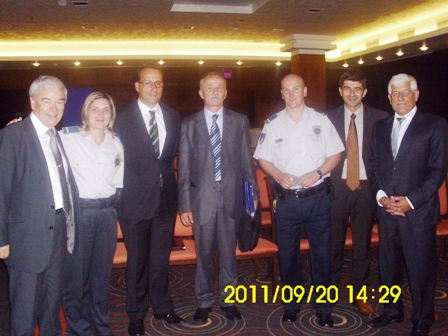 It is important to build the image of community policemen

Community policing is a type of police engagement in use in most  developed countries today. Its main objective is to contribute to a safer environment and a general feeling of security for both individuals and communities. With the help of the Swiss Agency for Development and Cooperation (SDC), the project of community based policing was initiated in Bosnia and Herzegovina. The Ministry of Internal Affairs of Canton Sarajevo plans to intensify efforts to promote this concept of policing in the following year.

In an interview with the Minister of Internal Affairs of Canton Sarajevo Muhamed Budimlić, we learn more about the concept of community policing and its implications on security in Sarajevo.

– In this form of engagement, it is crucial for police officers to be in close contact with citizens, thus representing the police service, their responsible activities, their work in the field, etc. In return they receive a higher amount of confidence from the citizens. This should contribute to greater citizen participation in activities conducted by the police on issues, for example, of crime, traffic safety, arms and ammunition control, etc. This way, citizens are motivated to a significant extent to cooperate with the police in creating a safer environment.

On the other hand, what they receive from the citizens through such work certainly contributes to the efficient performance of police officers. Citizens will provide much more information about potential perpetrators and perpetrators themselves, crime locations, time of the offense, etc. Sometimes information crucial to solving a crime or a misdemeanor – says Budimlić.

Thus, the focus of community based policing is the relationship with citizens?

– Yes. Through partnership with citizens, police officers can gain their trust. In this way they also motivate citizens to participate and to assist the police in dealing with all their involvements and activities. On the other hand, people feel safer because they know with whom they are communicating and they know that they can rely and have personal, direct contact with the police.

The only problem in changing the people’s philosophy of thinking is that the police are often involved in repressive tasks. It is unlikely that citizens will have the same level of trust towards the police officer that today, for example, punishes him/her for a misdemeanor, and tomorrow speaks with him/her about an apartment break-in, etc. So it would be good to train one number of police officers, depending on availability, capacities and population density, to work on community based policing. Of course, all police officers should also receive instruction on the importance of better communication with citizens.

The roots of the U.S. and Western Europe

How long has the concept of community based policing been present in Bosnia and what are the challenges of its implementation?

– In Bosnia and Herzegovina, this project has been running since the late nineties, and is an integral part of the reform processes of police forces in BiH. Originally, its roots are in the U.S. and Western Europe. It is carried out worldwide, with varying degrees of success. However, before the war in former Yugoslavia, we had something similar to the concept of community policing. We relied on a system of social self-protection. Within police units, we had so called neighborhood police officers, police officers that were in close cooperation with citizens receiving information from them and helping the communities to create a better security space. Today in Canton Sarajevo, it is necessary to build the image of a community police officer. He/she has a dual role: to convey to the police what the interests of citizens are, to be someone who will listen to the concerns of the citizens, who will identify what is really a general problem for one micro environment, and to present those needs and problems to the police agencies, along the hierarchy line. On the other hand, he/she also needs to be the police among citizens and give them the possibilities and responsibilities, and show them what they can and should expect from the police agencies. They play the role of liaison officers. So, to convey to the police the interest of the citizens, and to the citizens the abilities of police agencies.

How many staff members in your MoI are trained for the work of community policing?

– In order for this concept to be implemented, it is necessary to specialize police officers, because it is difficult to implement the overall concept of community policing if standard police officers were hired to do it. While all police officers should receive instructions on the importance of how to communicate with citizens, we can not expect that everyone at that level will have the knowledge, sensitivity and ability to communicate and can achieve that kind of connection.

What are the experiences from the field?

– Different. Some are better and some worse. Unfortunately, we have not yet established a measurable system of services. What is lacking, not only for the community based policing but also in general, is the whole system of justice and law enforcement agencies to be improved measurability. We have certain systems of evaluation, but these need to be amended, revised and improved so that we could then evaluate the results we achieve. However, from various institutions in which community police officers work, we have received information that they are very satisfied with their work. These include, for example, centers for social welfare, municipal administration and schools, where officers all expressed satisfaction with this type of police work. And other institutions that are of a social, educational or cultural nature have given support to these activities. We do not have the ability to see what the actual effects of our activities are, so we have to have continuity in the functioning of a measurement system in order to see what extent we actually contribute to crime prevention, and to the impact on the overall security environment.

How hard is it to measure police performance in crime prevention?

– It is quite difficult because all the reports on the work of the entire criminal justice system is reduced to statistics on the number of offenders, suspects and offenses, which is, of course, far from what really happens. Since we have no real data about crime in our country, this statistic is only an indicator of activity of those who reported these figures, a phenomenon not at stake. We have difficulty getting a true picture of crime. Meaningful involvement of academic institutions, nongovernmental organizations and scientific institutions, is essential to help create a better, more reliable picture of what is unlawful behavior. Those who enforce the laws – the police and the prosecution and the courts – should understand the importance of this approach and to set up their own research on his work.