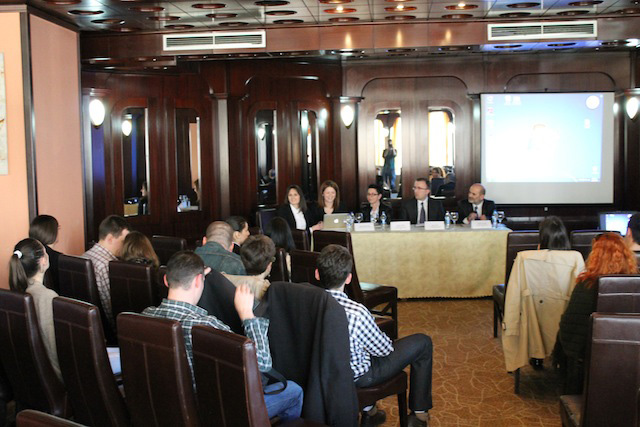 {gallery}newsletters/18/2/{/gallery}Head of the European Union Police Mission (EUPM), Commissioner Stefan Feller, shared his views on combatting juvenile delinquency in Bosnia and Herzegovina (BiH).  Feller discussed how the Mission supports BiH authorities, but emphasized that more than competent law enforcement is required to reduce crime among youth.

Atlantic Initiative: Is combating juvenile delinquency a priority for any of the international agencies operating in BiH?

Feller: EUPM supports law enforcement agencies in BiH in the fight against organized crime and corruption, notably focusing on state level law enforcement agencies. We also assist in the interaction between police and prosecutors and on regional and international cooperation. Assistance in fighting juvenile delinquency is not at the core of our mandate but we assist and advise our counterparts because the prevention of juvenile criminal careers is important. Criminal groups are recruiting vulnerable young people into their networks. To undercut recruitment channels for crime is important. We encourage our partners to tackle juvenile delinquency with energy and in a holistic manner.

AI: What sort of activities, or campaigns have been organized to date, and are new initiatives planned in the future?

Feller: The EUPM have supported implementation of numerous campaigns of the law enforcement agencies in Bosnia and Herzegovina and organized trainings and seminars for our counterparts. The campaigns focus on the fight against organized crime, corruption and police accountability. We have also assisted the law enforcement agencies throughout BiH in addressing other security issues such as juvenile delinquency, domestic violence and drug abuse. We are also supporting in gender related activities and promote the role of women in police.

AI: What benchmarks does the international community use in order to measure its progress regarding this issue?

Feller: The standards are set in international bodies of which Bosnia and Herzegovina is member such as the Council of Europe and the UN organizations, but these are not benchmarks. EUPM looks at available data. On the side of BiH authorities we encourage systematic efforts by all competent levels of government to address root causes of juvenile delinquency. They need to develop non-discriminatory youth policies which benefit all children and young people; may they come from the constituent peoples or the “others”. It is obvious that not enough is being done to integrate minorities and young people. The police and judiciary are at the end of the chain when things went wrong much earlier. In cases of violent crime committed by juveniles, police react swiftly and arrest perpetrators. It seems that corrective measures are also not applied consistently and there are not enough institutions and programmes to help young delinquents to re-integrate in society and lead a life without crime. The governance system of Bosnia and Herzegovina is complex and this makes policy coordination challenging. However, to assist young people at a lot of different agencies and services have to work closely and coordinated together in any other country as well. The Council of Europe member states have developed standards for youth policy which Bosnia and Herzegovina is trying to implement.

AI: Have any major setbacks or improvements recently occurred in terms of combating juvenile delinquency?

Feller: The efforts from the policing aspects are visible but the police actions need to be accompanied by actions from other relevant institutions. Every age cohort will have its own difficulties during adolescence. Today’s young people are probably affected by the difficult economic situation in the country while on the other hand they are more than ever connected to each other and the rest of the world through the internet. It is positive that there is more discussion about the difficulties young people face in your society.

AI: Are the BiH institutions charged with addressing this issue capable of doing so?

Feller: Communities and citizens are concerned when incidents occur. In our assessment police are capable of dealing with delinquents but again, police is only one aspect. Families, communities, schools, business and government at the competent levels have to offer and create conditions for juveniles’ successful transition into adulthood. Juvenile delinquency has and will always exist. All too often, we see simplifying approaches, such as calls for a stronger police. Juvenile delinquency is not kept in check only by control and punishment. European states have left this approach behind thirty years ago and it did not work fifty years ago either. Simplifications like these try to deflect from the real problem: the absence of a responsible investment into the education, training and future of young people supported by proper youth policies. Such investment and commitment are the best prevention. Responsible institutions are certainly capable but they need to encouraged, equipped, trained and financed to invest in young people.

AI: In what ways does EUPM cooperate with national authorities or institutions when attempting to decrease the number of instances of juvenile delinquency?

Feller: We work with the police services of this country. As part of their overall crime prevention strategy we advice them to constantly carry out risk and threat assessments. This includes areas which are of interest and concern to young people.

AI: In your opinion, what are the main factors which cause juvenile delinquency in BiH?

Feller: My opinion would be personal and that one of a guest in this country. My personal opinion is of no value for the process. One has to start with a systematic analysis of the root causes of juvenile delinquency. You can’t address what you don’t understand. If you do not understand the mechanisms that nurture juvenile delinquency, you are wasting time with inefficient measures based on personal opinions. The youth of Bosnia and Herzegovina deserves better.