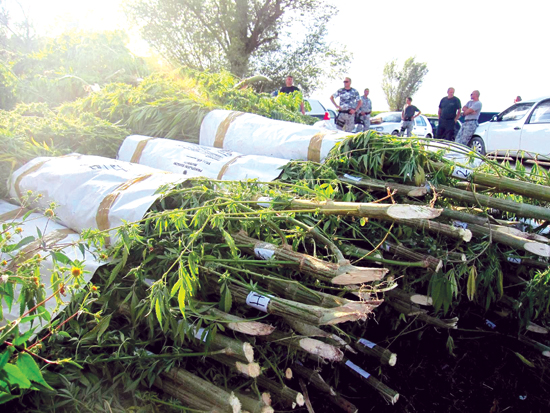 Action of the Federal Police

Police officers of the Federal Police, in collaboration with colleagues from the Ministries of the Interior of Zapadno Hercegovački and Hercegovačko- Neretvanski Canton, performed an extensive action in the wider region of Herzegovina in early September, with the objective of breaking up an organized drug group.

So in Hutovo blato, 15-kilometers from Capljina, they found 13 cannabis plantations cannabis plants. It is the thousands of stems, average height of two meters and weight of 5 to 7 kilograms of exceptional quality. Preliminary expert opinion suggests that these plants of exceptional quality, whose street value, as a finished product, reaches the price of hundreds of thousands of BAM.

From the air and water

During the first day of the inspection of Hutovo blato, ten special team forces and five teams of crime police of FMUP found 1300 stems of Indian hemp, from which it is possible to produce marijuana with street value of approximately 1.3 million BAM. The police explained for the press that one of Indian hemp stalks can produce between two and four kilograms of marijuana, and seized the entire quantity of produce about two tons of narcotics.

The area where they found plantations is extremely inaccessible, and the locations could be accessed only by water and air. Therefore, the operation involved ten teams of the Special Police Unit of the Federal Police. Helicopter team providing a full-air support to members of the Crime Police Department, while the nearby diving team provided communication with travel sites on the subject which are now found.

Police officers detained several people who are connected with these crimes. Were searched cars, houses and other buildings used by these people was released from the Federal Police. Reporting on this action, the Oslobođenje announced that they have brought Srecko brothers, Oliver and Nikica Bošković from Capljina and their cousin Nikola Bošković suspicion grew stalks of Indian hemp. It is interesting that he was arrested Srecko Bošković one warden in the park Hutovo blato. Were brought after criminal investigations in field offices in Mostar, the Prosecutor’s Office submitted the Herzegovina-Neretva Canton for further proceedings.

During the trial in their cars, housing and other facilities were found and temporarily seized two motor boats, automatic rifle, a semiautomatic rifle, three hunting rifles, a pistol, 200 grams of explosives, hand grenades, more than 1,500 bullets of different calibres, and other items of interest to investigate (digital scales, Motorola, cell phones, etc.).

All seizures of drugs and other items were transported to the Centre for Forensic and IT support to the Federal Police and referred to the expert.

– This is a disaster, but can be explained by the fact that our government of the Herzegovina-Neretva Canton has 20 months left without salaries, we have no possibility to finance gamekeepers. People fall into this area when they want, engage in illegal fishing, poaching. We have no control over this area. You could have anyone he wanted to plant – told the Dnevni Avaz Nikola Zovko, Director of the Nature Park Hutovo blato.

Action of the Federal Police carried out on the orders of the Prosecutor’s Office of the Herzegovina-Neretva Canton and the approval of the Municipal Court in Capljina, preceded her months of cooperative work. The operation is on-site managed by Dragan Vikić, commander of special police units and FUP.

From the FUP and highlighted a significant involvement of Police and West Canton, especially in criminal investigation and intelligence phase of police operations.