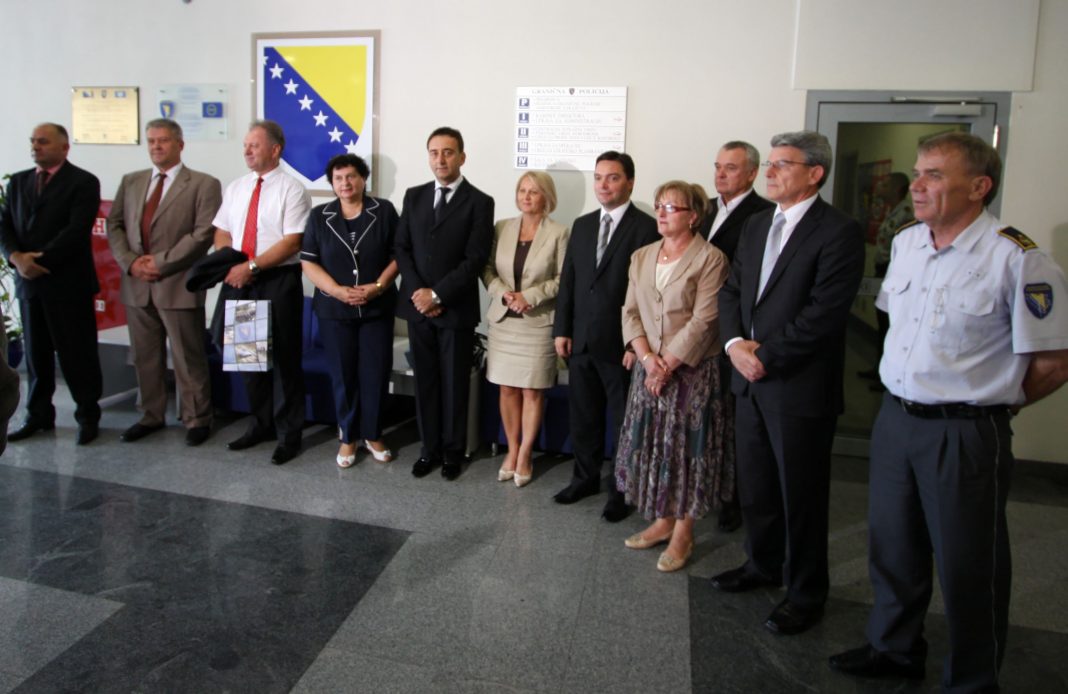 Mounting Success for the Border Police of Bosnia and Herzegovina

{artsexylightbox}On the 20th of July, members of the Joint Commission for Defence and Security of the Parliamentary Assembly of Bosnia and Herzegovina visited the headquarters of the Border Police of BiH in Sarajevo. It marks the first working visit by the newly configured session of the Joint Committee to the law enforcement agency. Praise for the agency was plentiful after the Joint Committee convened with officials, including Border Police Director Vinko Dumancic, Deputy Director Enes Gacanin, Cabinet Chief Radisa Samardzija, and Director and Chief of Operations Jovo Djuric.

Prior to the visit, the Joint Committee’s third session adopted a report on the work of the Council of Ministers in 2010 on the jurisdiction of the Joint Commission. Another report was also adopted relating to the work of MAC in 2010 on numerous agencies, including the Ministry of Defence; the Ministry of Security; the State Investigation and Protection Agency; the Border Police; the Department for Foreigners’ Affairs; the Directorate for Coordination of Police Bodies; the Police Support Agency; the Agency for Education and Training; the Agency for Forensics; and the Ministry of Civil Affairs.

On June 10th, the Border Police marked the 11th anniversary of their founding as an agency. The agency is the first multi-ethnic and professional law enforcement organization in Bosnia and Herzegovina. Members monitor and control the borders of Bosnia and Herzegovina, which in total are nearly 1,600 kilometers long. With 88 border crossings, the agency is in compliance with international standards for best practices, and is on a par with related agencies in Europe and worldwide. This was especially appreciated last year, when deliberations took place on December 15th on whether to allow visa-free travel to Schengen countries for citizens of Bosnia and Herzegovina.

Dušanka Majkić, the Chairman of the Joint Commission, detailed, “Here, we came to see the conditions in which the Border Police work, as the equipment and personnel are the main resources with which they have achieved such positive results. The Commission had the opportunity to verify the agency’s status as one of the best security institutions in the country. The agency has managed to establish standards and criteria in its structures to correspond with all modern mechanisms, as Europeans have. We’re really pleasantly surprised with all we’ve seen.”

During the meeting, a presentation was held for members of the parliamentary commission, whose task is to oversee the defence and security sector in Bosnia and Herzegovina, to familiarize them with the structure, plans, and achievements of the Border Police. The visit has provided strong support for the activities undertaken by the Border Police.

“I am proud and grateful to the Joint Committee for Defence and Security, which was our guest, and once again praised the work of the Border Police. I hope they will support our agency in the future as well. The Border Police have existed now for 11 years, and every day the agency improves and is better equipped and better prepared. The Border Police operate safely according to European standards in terms of human resources, technology, and other factors. The Border Police are not lagging behind other agencies – the results speak for themselves. We hinge on continuous cooperation with other agencies, both within Bosnia and Herzegovina and its neighboring countries. This is important, considering that the route followed by illegal immigrants does not always pass through Bosnia Herzegovina, but traces a wide-ranging circuit,” said Dumančić.

During the visit, members of the Joint Commission visited the Central Bureau of Investigation and the Border Police to get familiar with their work.

The Border Police now employs 2,283 people, of whom 2,094 are police officers, 43 are civil servants, and 146 are other employees. Under the current regulations for international organizations, the Border Police is lacking 253 employees. At a recent ceremony marking the anniversary of the Border Police, Director Dumančić stated that he hoped the problem of inadequate staffing would be resolved by the adoption of the new rules and the education of larger incoming classes of cadets in the future.

As a result of the meeting, the location issues were also resolved, for the main offices of the Central Investigation Office and the field offices of Visegrad, Bijeljina, and Trebinje Border Police Unit. Land was purchased for the building of new locations for the Gradiska, Grahovo and Čapljina field offices. Dumančić expects that, with the support of local authorities or through donations from the international community, funds will be provided for the construction of the new buildings, thereby providing Border Police with their own location and freeing up the portion of the budget currently reserved for leasing expenses.

The Border Police’s increasing success is a matter of note. Last year, as a result of the rise in border checks, 727 people were found for whom authorities in Bosnia and Herzegovina or Interpol had issued a warrant. The Border Police only refused entry to 3,514 foreigners into Bosnia and Herzegovina, representing a 31.14 percent decrease in comparison with 2009. Furthermore, 322 persons were detected attempted to illegally cross Bosnia-Herzegovina’s borders, reflecting the Border Police’s improvement in preventing illegal border crossings. In accordance with signed protocols, Bosnia and Herzegovina undertook 1,401 integrated missions with the border police of neighboring countries: 1,024 with Croatian authorities, 267 with Montenegrin authorities, and 110 with Serbian authorities. At border crossings, 327 visas have been issued, a decline of 5.22 percent in comparison with last year.

Consensus is crucial for BiH on the road to NATO

The Return of America

Why the urgency on adoption of the Election Law?

China’s influence in Montenegro: Incentives to economic development or a road to dependency?

What price will Turkey’s Uyghurs pay for the benefits of the Chinese vaccine?