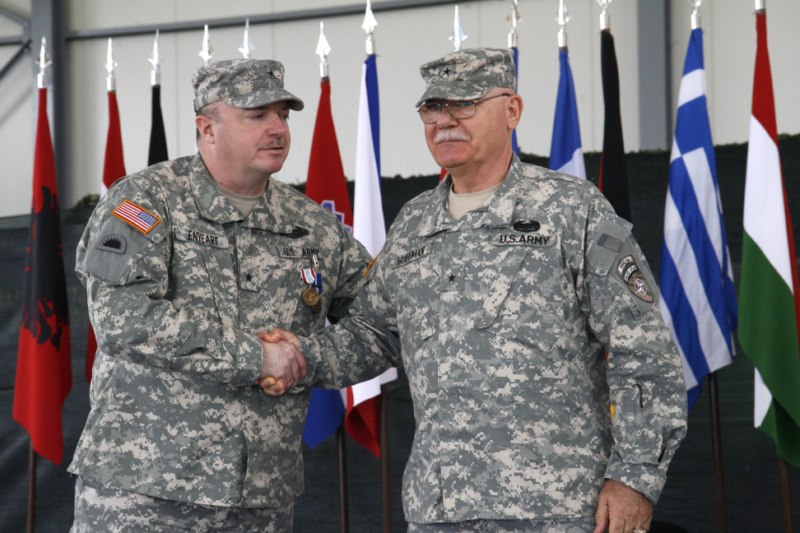 NATO’s new commander in Sarajevo is Brigadier General Gary E. Huffman.  Huffman, who also comes from the United States Army, has served in various positions at home and abroad.

At a ceremony at Camp Butmir on Wednesday, June 15th, Brigadier General Huffman took over as Commander of NATO Headquarters in Sarajevo.  The change of command ceremony was conducted in the presence of Major General William H. Wade II, Head of Operations at the Allied Joint Force Command in Naples.

General Enyeart will return to the United States after several years in Sarajevo.  His successor, General Huffman, has been stationed in the United States and abroad.  Huffman faces a challenging assignment and it is expected that Bosnia and Herzegovina’s first annual cycle of the Action Plan for NATO Membership (MAP) will be implemented during his one-year mandate.

A Year of Challenges

{artsexylightbox}Following the opening ceremony and singing of the national anthems of Bosnia and Herzegovina and the United States, a symbolic NATO flag handover took place.  Prayers and addresses by Generals Wade, Enyeart and Huffman followed.  On behalf of Admiral Samuel Locklear, Commander of NATO’s Allied Joint Force Command in Naples, General Wade thanked all those present for their attendance.

“The Admiral asked me to express my gratitude to Brigadier General Enyeart and welcome General Huffman.  General Enyeart has had a very productive year in this country.  It was a year full of challenges, primarily as a result of the complex political situation.  However, thanks to his leadership, progress has been made regarding many key issues,” said Wade.

Major General Wade recalled that Enyeart had worked closely with the Ministry of Defense, in addition to other bodies, in order to address complex policy issues and technical aspects regarding immovable military property.  General Enyeart contributed to a better understanding of this issue through the development of a comprehensive report on the current status of military property.  He also drew up a road map that includes all the important aspects for a solution to this issue in accordance with NATO’s expectations.

During Enyeart’s mandate, NATO handed over a significant segment of Camp Butmir to the Ministry of Defense.  This allowed for the maintenance of necessary facilities and services, while providing the Armed Forces of Bosnia and Herzegovina with an established model for the future takeover of all of Camp Butmir.  This represents a key task with a concrete result.  However, Enyeart’s contributions are perhaps better viewed in a general sense.  Drawing on his previous civilian and military experience in the Army National Guard of Oregon and elsewhere to his advantage, Enyeart launched a strategic communications program.  He noted that the key to progress in BiH regarding NATO accession is a better public understanding of NATO.  This program was conducted in cooperation with various partners, including the Ministry of Foreign Affairs, the Embassy of the Republic of Turkey and the NATO Contact Embassy in BiH.  This campaign proved successful.  “Across BiH, citizens of this country now know more about NATO and the issues related to it,” said General Wade.  “I am confident that General Enyeart will be glad to return home, and he returns knowing that despite a complex societal and multi-ethnic environment, he has made a significant contribution to BiH as it continues down the path toward full NATO membership.”

Next, the Head of Operations at the Allied Joint Force Command in Naples welcomed General Huffman:

As was the case with General Enyeart, your broad military and civilian experiences will prove useful to you over the coming year.  Your job is a challenging one, and in many ways does not fall within the range of traditional military tasks.  You are surrounded by an excellent organization staffed with competent individuals, and I’m confident that you will be a successful commander.

General Wade stressed that NATO remains committed to supporting BiH on its path towards NATO membership.  NATO Headquarters presence in BiH is concrete evidence of that.

– We know that there will be plenty of challenges on BiH’s path towards NATO, but we also know that the process of joining NATO provides a framework and tools for overcoming these challenges. NATO’s doors remain open. All NATO allies are looking forward to the day when BiH will become a member, equal to all other allies.  Members benefit from NATO’s security umbrella, but still retain their sovereign right to decide on their mode of action.

Enyeart stressed that it had been a pleasure for him to be the Commander of NATO Headquarters in Sarajevo.  Over the past year, BiH has continued and expanded its involvement with NATO via the Partnership for Peace as well as through reform of the defense and security sectors.  Enyeart’s work focused on a range of issues, many of which are extremely technical and complex.

According to Enyeart, the Ministry of Defense and Armed Forces of BiH have demonstrated a high level of commitment.  The Ministry of Foreign Affairs and other institutions have also shown their professionalism and dedication.

I am glad that I had the opportunity to help support progress in these areas and cooperate with Bosnians who work in these institutions, at both the state and entity levels.  Their efforts have been unfailing.  BiH can be proud of the results achieved via defense reform and this country’s contribution to international peace and security through participation in the NATO-led mission in Afghanistan.  Such results can serve as an example for further reform and demonstrate the success that can be achieved through cooperation, dialogue and consensus-building.

His strongest impressions are related, General Enyeart said, to the enormous potential of this beautiful country and its hospitable people.

– I have had the opportunity to meet with many individuals who work in the government, military, civil society and media sectors.  I’ve also interacted with students and everyday citizens.  Every single one of these meetings proved instructive for me.  As far as my personal life is concerned, my wife was able to visit BiH twice during my mandate, and I must say that she enjoyed it here as much as I do.  It’s hard to say what life will bring, but I sincerely hope to someday return in order to visit the friends I’ve made here.

A New Government and McDonalds

General Enyeart went on to thank the entire team at NATO Headquarters in Sarajevo and all the representatives of the international community with whom he has worked over the past year.  He expressed special appreciation to the EUFOR commander, Major General Bernhard Bair and his team for their professionalism and assistance.

I wish my successor, Brigadier General Gary Huffman all the best during his upcoming term in BiH.  I hope you will enjoy your stay as much as I have and that you will gladly work on helping BiH successfully respond to challenges on the path towards EU and NATO membership. As I have said many times, our common goal is a safe and prosperous future for all citizens.

In conclusion, General Enyeart told journalists that he had met wonderful people in BiH who long for peace, prosperity, work, normal lives and a normal government that is capable of working toward these goals.

I can see that this will happen. What is important is that people believe in their government and in their country.  BiH will evolve and eventually join NATO.  Of course, there is work to be done in the meantime.

During the ceremony, General Enyeart was given a medal as an award for the work he had done while in command in BiH.

The new commander of NATO Headquarters in Sarajevo, General Gary Huffman, served as a member of the Army and the Mississippi National Guard.  He has served in various other military capacities, both at home and abroad.  Additionally, General Huffman has had a successful civilian career in the private and public sectors.

– As a result of this [broad professional experiences], I look forward to meeting people from different societal sectors and all parts of the country.  Specifically, I hope to get to know individuals from the government, military, media, civil society and private sectors.  As you might expect, a number of people have asked me about my first impressions of BiH.  Although I fully plan to follow the example set by my predecessor and see as much as possible, I have not yet had a chance to travel outside of Sarajevo.  However, I can already tell you that this is a country of beautiful landscapes and generous people – people who are facing a secure and stable future.  Such a future is what they deserve.  In cooperation with my team at NATO Headquarters in Sarajevo, the people of BiH and the international community, I promise that we will continue our contribution to building this kind of future.