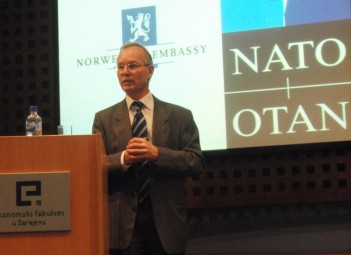 At a lecture held at the Economics Faculty in Sarajevo, Ambassador Jan Braathu spoke about NATO’s foundations and core values. The Ambassador also addressed the Alliance’s relationship with Russia, the recent summit in Lisbon and BiH’s Euro-Atlantic integration process.

Ambassador Braathu began his lecture by offering some basic information about NATO. He emphasized the internal values shared by Alliance members which allow for the effective maintenance of security in the Euro-Atlantic region.

“The foundations of NATO were built on the principle of cherishing democratic values and acting according to them. This is what makes this Alliance operational, relevant and capable of assuring collective security for its members,” Ambassador Braathu said.

The value NATO gives to democracy may best be seen in the organization’s consensus-based decision-making process.

“In practice, this means that even small countries, such as Norway or BiH, have real influence within NATO. Decision-making mechanisms enable all voices to be heard. Strong advocacy on Norway’s part, and that of other NATO members, has helped bring BiH closer to membership. At the

meeting for ministries of foreign affairs of NATO member countries in Talin in April 2010, a Membership Action Plan was awarded to BiH,” Braathu explained.

In the Ambassador’s opinion, another clear manifestation of democracy within NATO was the public presentation of activities during the draft process of creating a new strategic concept. By allowing for public discussion about this, NATO demonstrated its openness.

Later in his lecture, the Ambassador spoke about the recent summit in Lisbon, where this draft for the new strategic concept was officially adopted by the Alliance. Ambassador Braathu considers an improvement in NATO-Russian relations to be one of this meeting’s major successes.

“Cooperation with Russia is of great importance for establishing security in the world. The time has come for others to stop viewing this country as a constant potential danger, because, at the moment, that is not what it is,” Braathu commented.

Noting a recent example of cooperation in which NATO and Russia collaborated in order to end a drug trafficking network in an Afghan village, Braathu expressed his confidence that the Alliance and Russia will continue working together for one another’s mutual benefit.

For the remainder of the Ambassador’s lecture, attention was given to BiH’s efforts toward Euro-Atlantic integration. The Norwegian Ambassador explained that security sector reforms over the past five years have proved successful and exemplify BiH’s determination to attain the status of a NATO member state.

“Membership in NATO means security and prosperity for this country, as well as a significant contribution to the stability of the entire western Balkans, which is in the interest of both the region and NATO. In the 28 NATO member countries, BiH has friends that will help it on this challenging road. Keep in mind the official will and determination of BiH’s politicians for their country to become a member, the increasingly concrete political activities in this field and the successful reforms of the defense sector. Currently existing problems related to military property and other hurdles will also be overcome successfully,” Braathu said.

“BiH’s success will be a success for all of us,” concluded Ambassador Braathu.