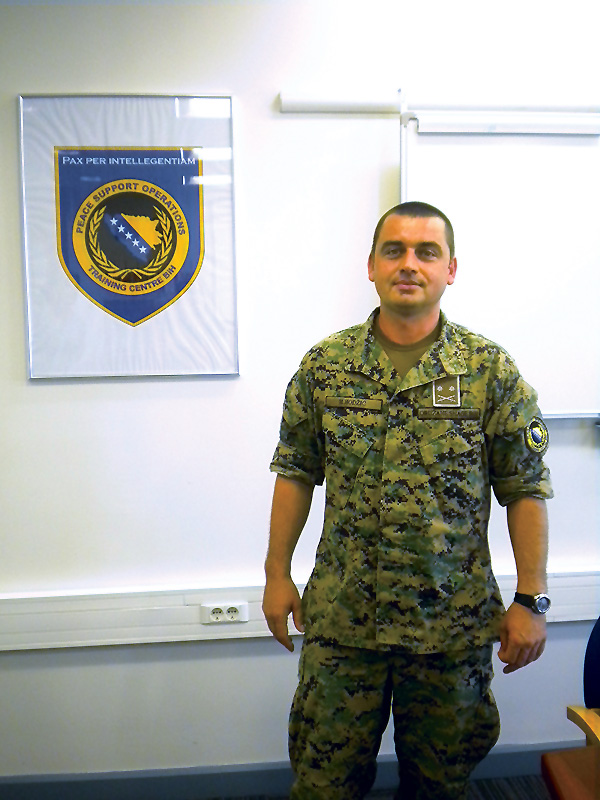 First in the region

In April this year, NATO accredited three courses at the PSOTC as “NATO-selected” courses. Col. Hazim Hodzic, an instructor at the PSOTC, elaborates on what this means, not only for the Centre, but also for relations between Bosnia and Herzegovina and the North Atlantic Alliance.

{artsexylightbox}The Peace Support Operations Training Centre (PSOTC) at Camp Butmir, in partnership with the Ministry of Defence, recently introduced three courses, which have received NATO accreditation. The public was informed about the recent achievement of the PSOTC through Major General Rizvo Pan, Deputy Chief of the Joint Staff of the BiH Armed for Operations, Lieutenant Colonel John Andreas Olsen, Deputy Commander of NATO Headquarters in Sarajevo, and Brigadier Kenan Dautović, Commander of the Centre.

The three courses that have recently been given “NATO-selected” status include the International Staff Officers Skills course (ISOSC), the Peace Support Operations Staff NCO Course (PSOSNCOC), and the Counterinsurgency Course (COIN). For NATO training centers, such as the PSOTC, there are three levels of accreditation. The first and lowest level of accreditation is the “listed” NATO course, which is a designation non-member countries of NATO are able to attain. The second level of accreditation includes “NATO-selected” courses, a designation that in rare instances can be given to non-member countries of NATO (as in the case of Bosnia-Herzegovina). This level of accreditation confers a higher degree of recognition but also entails more stringent standards for acceptance by NATO. These courses aim to train participants in professional skills that will prepare and authorize them for NATO missions. The third and highest level of accreditation is the “NATO-approved” course, which is reserved solely for NATO member states.

The PSOTC is intent on accrediting their other courses. The recent accreditation of PSOTC courses can be attributed not only to the efforts of the PSOTC staff, but also to the contributions of the Armed Forces of BiH, which have shown great willingness to participate in future peacekeeping missions.

Founded in 2003, the Peace Support Operations Training Centre is a multinational project sponsored by 18 countries: Austria, Bosnia and Herzegovina, Denmark, Finland, France, Croatia, Hungary, Macedonia, Netherlands, Norway, Poland, Serbia, Switzerland, Sweden, Turkey, and the UK. It was founded to provide professional training to a new generation of soldiers, to strengthen security structures, and to establish close cooperation between partner countries and civil-military structures within Bosnia and Herzegovina. The UK launched the initiative establishing the PSOTC. In 2013, Bosnia and Herzegovina will be taking over management of the Centre.

The PSOTC has received “NATO-selected” accreditation for three of its courses. Can you explain what accreditation actually is and its implications?

– “NATO-selected” courses can be accredited within a non-NATO country. However, the courses at the PSOTC that have been accredited by NATO are the first courses accredited in the region. This means that NATO certifies and recognizes the quality of our work.

The first course accredited by NATO was ISOSC (International Staff Officers Skills Course), which was held this year from June 6th through July 1st.

It was the first “NATO-selected course” we held in 2011, and was attended by 19 members of the Armed Forces of BiH and 14 international participants. The purpose of this course is to prepare junior officers and captains to deploy on any peace support operation. Therefore, the course provides general knowledge and skills, not necessarily for a specific position, but for a broader spectrum of functions. For example, junior officers who complete the course go on to a particular position, perhaps to do logistics or work in civil-military cooperation, and will need additional, more specific training to perform those functions.

Who teaches the courses?

– In all of our courses, we try to ensure that we include international speakers, which means that instructors come not only from the BiH Armed Forces, but also from the wider region and all over the world. This year, we had instructors from as far as Chile. At the very least, for all courses, we strive to engage representatives of NATO as instructors and as external evaluators, since these representatives serve to monitor our courses and provide us feedback. Other institutions, which are also invited to participate and function as our partners, include the Naval Postgraduate School in the United States and the Faculties of Criminology and Security Studies and Political Science in Sarajevo. The Parliamentary Assembly is also involved, whose representatives come to speak at the PSOTC on building integrity, on human rights, the code of conduct, and parliamentary oversight of the Armed Forces of BiH. We also invite our colleagues in the region, such as the Croatian Armed Forces Peace Support Operations Training Centre.

Tell us more about the other two “NATO-selected” courses.

Does this mean these officers gain management skills for a multinational environment?

– Regarding content, the course begins by outlining certain IT skills, and from there, moves on to basic skills such as writing and presentation skills. These are basic staff skills that everyone in the military has to know. Then, we overview planning tools that officers use in organizing operations. As I said, the role of staff NCOs is to perform support staff functions, thereby allowing officers to concentrate on planning operations. Thus, we offer planning tools, and accompanying this instruction, we offer practical exercises.

Is this course planned for this year or has it already happened?

– Yes, the course was held in March and April this year, with the accreditation by NATO given at the end of the course. If we examine the aim of the course, it allows one to work in a multinational environment, which means that officers who complete the course are able to participate in any UN or NATO peace support operation or mission. This particular course was developed based on the experience of our officers who participated in operations in Afghanistan. There, our instructors had the opportunity to work alongside nations that engage NCOs in staff duties, like the UK and Denmark. This course is unique in the region and has attracted great interest. The next course is the Counterinsurgency Course (COIN), which was developed on the basis of our experience and involvement with UK and Danish contingents in Helmand, and on the basis of the recent ISAF commander’s instructions. Every officer participating in the mission area should have basic knowledge of how a counterinsurgency is fought. Thus, this knowledge becomes a prerequisite for officers deploying on an ISAF mission. The COIN course lasts a week, and its aim is to provide officers with an understanding of the history of counterinsurgency and examples of fighting an insurgency, as well as understanding of the concepts used in a variety of current counterinsurgency operations. This course will take place this autumn here at the PSOTC, but we already have requests from Albania, Montenegro, Croatia, and Serbia, to offer this same course in 2011 and early 2012.

Did members of the BiH Armed Forces who deployed on the ISAF mission some months ago participate in this course?

– Yes, we offered these courses to members of the BiH Armed Forces and to other soldiers in the region.

The PSOTC recently signed a letter of intent with the Ministry of Security and other agencies, thereby expanding the scope of its activities and the involvement of civil servants. What new obligations does this entail for the Centre?

– On the 10th of June this year, we signed a letter of intent with the Ministry of Security in order to expand cooperation, with respect to reserving seats in our current courses and creating a new civil police-oriented course. The letter of intent is essentially a framework document that corroborates everything that has been done thus far in terms of reserving space in our courses for their employees. The letter is in accordance with the UN’s philosophy of integrated UN missions. Today, UN missions are not designated as solely military or police or civil operations. If you scrutinize current UN missions, all of these are complex, comprehensive, and integrated. For this reason, the PSOTC embraces the UN’s integrated philosophy in its training programs. Without properly trained personnel, action can ultimately lead to failure. With regard to future cooperation with the Ministry of Security, we recently had a meeting during which we discussed joint exercises involving police, military, and civilian officers, which would reinforce the integrated and comprehensive approach of our training. We have also decided to offer a two-week CIVPOL (UN Civilian Police) course, which will be organized, managed, and jointly delivered by the PSOTC. Instructors will be from the Ministry of Security and the PSOTC, and the course will be held here at the PSOTC. This will be our first contingent of civilian police to be trained in Bosnia, in their preparation for UN missions. It is scheduled to begin early 2012.

Will the course only be open to police?