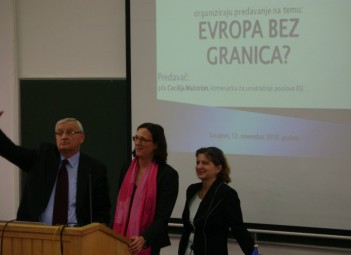 During her official visit to Bosnia and Herzegovina (BiH), European Commissioner for Home Affairs Cecilia Malmstrom lectured at the Faculty of Political Science at the University of Sarajevo on November 12th.  Her presentation, which was followed by a lively discussion, focused on the visa liberalization regime and the subsequent steps which will bring BiH closer to Europe.

“The visa liberalization regime for citizens of Bosnia and Herzegovina is the result of tremendous effort invested by both citizens and political leaders in BiH, and represents another in a series of successes which will bring BiH closer to the European Union (EU),” Malmstrom said.

Professor Mirko Pejanović, Dean of the Faculty of Political Science, expressed his satisfaction with Commissioner Malmstrom’s visit to the academic community in BiH.  He also noted his gratitude for the assistance she has contributed which ultimately resulted in a unanimous vote by EU member states to allow the visa-free regime.

“BiH has lived in isolation and uncertainty for too long. The visa liberalization regime shows that citizens of BiH agree on one issue – their country joining the EU,” Professor Pejanović commented.

“Rule of law, enhancement of democratic processes in BiH, and the fight against corruption and organized crime should not be aspired towards merely because of the EU and visa-free regime, but primarily because of the citizens of BiH. At the moment, the entire Western Balkans is in the so-called visa liberalization regime, which we hope will contribute to the strengthening of processes of full incorporation of this region into the EU,” Malmstrom added.

Commissioner Malmstrom used this opportunity to invite political leaders in BiH to cooperate concerning constitutional reforms as there is a nationwide consensus on the country’s pro-EU orientation.