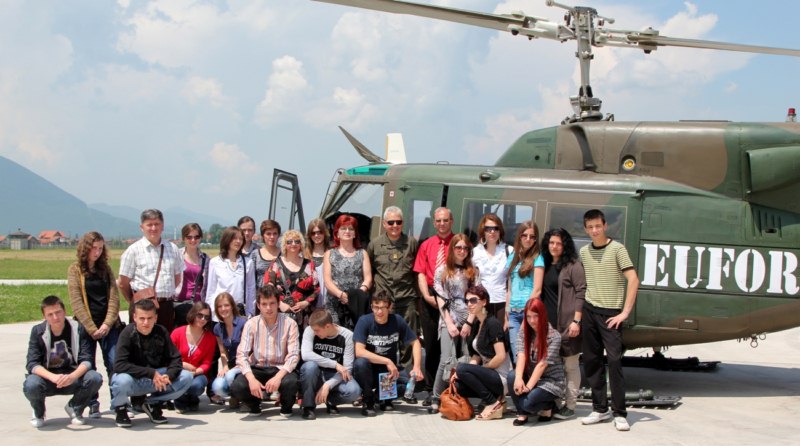 Major General Bernhard Bair, COM EUFOR officially launched the EUFOR Youth Campaign today, 31 May. The campaign focuses on the young people of BiH and that the institutions in Bosnia and Herzegovina need to start functioning effectively. Only when this happens can BiH move towards the European Union and get things moving in the right direction to provide a better future for the youth.

A joint party of teachers and pupils from ‘Ivan Goran Kavačić’ School in Kiseljak, ‘Gimnazija Visoko’ School in Visoko and ‘Sokolac’ High School in Sokolac were also visiting EUFOR at Camp Butmir, Sarajevo.  The highlight of the visit was a demonstration and tour of the Augusta Bell 212 and Alouette III helicopters that are used for air transportation and Medical Evacuation operations.

At a reception for the pupils COM EUFOR remarked, “The children from these three schools have come together today exchanged ideas, explored new subjects whilst having fun and this is fantastic. It is important to bring children together from all over BiH in a spirit of friendship and allow them to work together, learn from one another in order to start to put down foundations for a better future.”

EUFOR organises a number of initiatives in support of the youth of the country in order to bring children from across BiH together to show them that they are all the same and that they need to work as one to bring a prosperous future to BiH. Earlier this month, the EUFOR School Competition Award Ceremony took place. This year, nearly 3000 entries were received from nearly 250 Schools. The EUFOR Cup will commence in October and this year will see the introduction of a girl’s competition for the first time.

Photo : COM EUFOR with the teachers and students of the schools visiting Camp Butmir