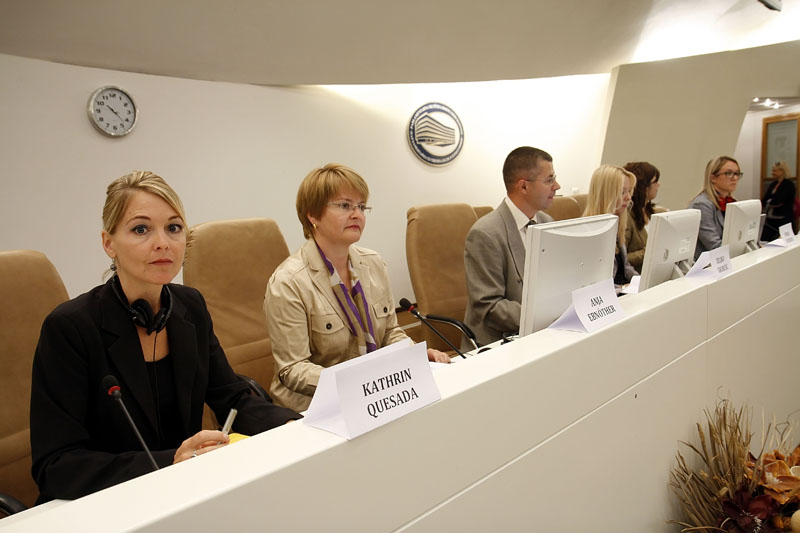 Women’s participation in the security sector

{artsexylightbox}The Geneva Centre for the Civil Control of Armed Forces (DCAF) and the NGOs Atlantic Initiative and Women for Women presented the results of the “Needs Assessment on Gender and Security Sector Reform in Bosnia and Herzegovina” at the Parliamentary Assembly of BiH on June 28, 2011. More than 60 people, representing government institutions, civil society, and international organizations, attended the presentation of the report. Many reacted to the results positively and expressed that the study would be helpful in contributing to the greater integration of gender issues into Bosnia and Herzegovina’s security sector. The report is the result of research undertaken from November through May 2011, including the analysis of relevant domestic legislation; an overview of the key international instruments and initiatives on gender and security; interviews with representatives of security sector institutions in Bosnia and Herzegovina (defense, security, internal affairs, judiciary and penal services, parliaments, and the relevant governmental and nongovernmental organizations); and local consultation in ten cities in BiH.

The report offers data and analysis on the current status of the integration of gender issues in the armed forces, police, judiciary, and correctional institutions at the state, entity, and cantonal levels. Gender and security issues are discussed within the current socio-political and institutional context of BiH, with an overview of the implementation of key national legislation and international instruments relevant to gender and the security sector. The gender sensitivity of current policies and practices is also examined. Furthermore, we have assessed the role of civil society organizations working in the field of gender and security, and the forms of collaboration that these organizations have with state agencies and institutions.

The conclusions of the assessment have been used to formulate concrete recommendations, in order to provide guidance and propose changes to government institutions, NGOs, and international donors. In facilitating the continued integration of gender in security sector reform, the further development of gender sensitive policies and practices in BiH is anticipated.

Initial results of the assessment indicate a lack of specific institutional policies, strategies or guidelines that would direct the integration of gender issues or that would concern employees of the armed forces, police, the judiciary, and penal institutions in BiH.

Security institutions base their practices on laws that, although officially condemning discrimination, do not address gender-specific issues.

For example, sexual assault and gender-based discrimination are very rarely reported, likely due to a combination of factors, including the fact that sexual assault is not recognized as such. Assault victims are afraid to report that they have been attacked, and there is an absence of gender-sensitive policies and institutional mechanisms to encourage reporting. Furthermore, there is a belief that sexual harassment and discrimination do not occur at all in security institutions, highlighting why this issue requires special attention and guidance.

In addition, security institutions in BiH do not have internal units devoted to gender or offices that deal with gender equality in employment, to which personnel could report unequal treatment. Some of those interviewed for the report were opposed to the establishment of such units or offices, claiming that existing organizational structures were immutable since these had been established in accordance with relevant laws that disallow such radical change.

Of the two institutions visited during the period of time the research was conducted, neither had established an association of female staff. However, the needs assessment discovered that promising initiatives existed; for instance, there is a network of policewomen who have formed a women’s association, comprising women at the regional level from the FBiH, RS, and Brcko District, as well as the BiH Association of Women Judges.

The year 2010 witnessed a significant increase in activities and educational initiatives related to gender and security in both governmental and nongovernmental organizations, as it marked the tenth anniversary of the adoption of UN Security Resolution 1325. Although training on gender issues is critical to policy implementation and to the development of gender-sensitive practices in everyday life, current efforts provide insufficient training on gender issues for employees in the public sector in BiH and are not systematically organized. Training sessions are only provided to a limited percentage of the workforce and are not available to all relevant employees. Indeed, it often happens that it is the same staff members who attend workshops and seminars related to gender issues.

The needs assessment also indicated that, in spite of determined recruiting efforts by the armed forces and the police, women compose less than ten percent of security sector institutions and services, evidencing the necessity of continued efforts to achieve equality in these institutions.

Some of the reasons why gender inequality persists in BiH security institutions include:

1. Jobs in the armed forces and the police are still considered typically male occupations.
2.  Gender issues are not considered a development priority.
3. Gender integration is perceived as a women’s issue, an attitude that implies that only women should deal with the matter.

Despite these persisting attitudes, trends indicate that there is increasing interest between both sexes for employment in the security sector. Some of the interviewees expressed the belief that the primary reason for the increased participation of women in the armed and police forces was financial. Even so, the analysis showed that another contributing factor was the promotional activities advocating women’s participation in security structures in certain regions of Bosnia-Herzegovina. For example, the media campaign “Stronger, Faster, Better” appears to have had an impact on women’s interest in the security sector, as well as joint visits to the army, police, and NGOs, school outreach, and increased media attention to the issue.

Since jobs in the security sector are traditionally considered a male occupation, advocacy for women’s participation and employment in this area represents a solid strategy for overcoming stereotypes.

Even more notable are efforts to provide equal, gender-sensitive services and justice in the security sector for those in need.

The needs assessment found that certain internal, gender-sensitive police procedures exist, such as the requirement that a full-body search only be conducted by a person of the same sex. In some police stations, separate rooms or even special departments have been established to better manage special types of violent crime. Female officers are considered especially important in facilitating communication with victims of domestic violence.  Additionally, security institutions generally appear to cooperate well with centers for social work. There are also promising examples at several state border police stations, at which specially equipped rooms have been developed as temporary shelters for victims of trafficking. However, it must be noted that there is a chronic lack of adequate facilities for specific categories of prisoners, especially women. Furthermore, Bosnia-Herzegovina’s Criminal Law does not accord a special status to female victims of rape, and entity laws are not harmonized on this issue.

The needs assessment also identified exceptional examples of cooperation between civil society and governmental security institutions, with NGOs in BiH recognized as the initiators of change on the issue of gender equality. Cooperation is reflected in policymaking; the development of action plans; the establishment of training programs; and the provision of gender-sensitive services at the local level, especially with regard to human trafficking and domestic violence. Examples of successful local organization include civil society groups such as the Citizens’ Forum in Prijedor, the Center for Legal Aid in Zenica, and the anti-human trafficking NGO Lara in Bijeljina.

Research suggests that there are numerous avenues through which a process can be initiated that impels the systematic and sustainable integration of gender perspectives into the structures and processes of the security sector. This is especially evident when considering the amount of international attention focused on gender issues, the current activities of NGOs, and the security sector institutions interested in expanding efforts.

Thus, NGOs, interested donors, and security sector institutions are relatively receptive to working on these issues.

The results of this research should ultimately drive authorities in BiH as well as international donors to further focus their efforts toward the development of gender-sensitive policies and practices in BiH, and more generally improve awareness of the importance of these issues.

The official version of the report will be available to the public late September 2011.