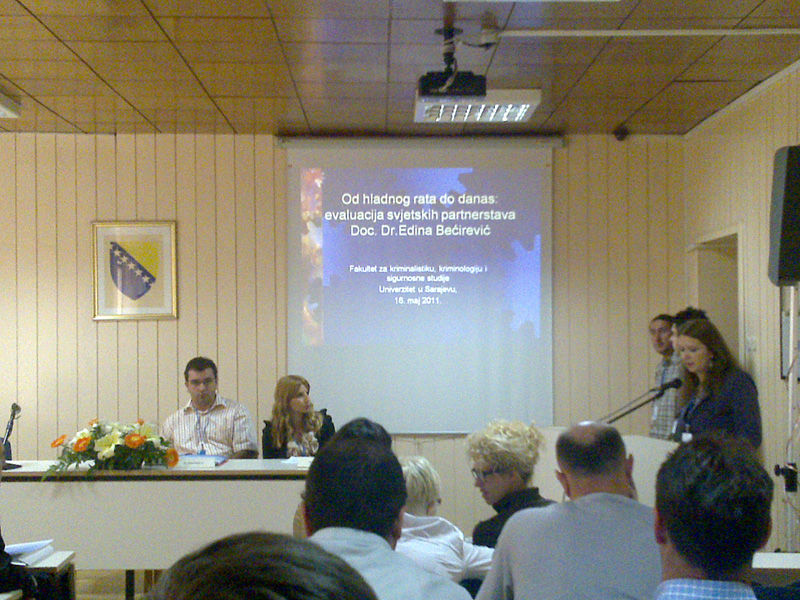 {artsexylightbox}The problem of security is not related only to governmental and legal questions, rather it implies that certain theoretical and moral issues be addressed as well.  This was one of the primary conclusions reached at an international academic conference, «Contemporary Security Studies and Bosnia and Herzegovina,» held on June 16th, 2011 at the Faculty of Criminology, Criminal Investigation and Security Studies.  The conference marked the 10th time that Days of Criminology Meetings have been organized.

This year’s conference brought together experts from throughout Bosnia and Herzegovina (BiH) and the surrounding region to share their knowledge about security, applied criminology and criminal investigation.  The Faculty of Criminology, Criminal Investigation and Security Studies demonstrated its position as a leading institution for the academic and professional elite to respond to modern security challenges.

During the 10th Days of Criminology Meetings, an honorary doctorate degree was awarded by the University of Sarajevo to TITLE Viktor Jakovich, BiH’s first ambassador to the United States of America, as well as the first individual to hold an index from the Faculty of Criminology, Criminal Investigation and Security Studies.  Upon receiving this diploma, Jakovich joined an academic community that includes Meša Selimović and Isak Adižes, among others.  University of Sarajevo Rector, Professor Dr. Faruk Čaklović, addressed Jakovich, saying that his «contribution to peace-building, democratization and societal renewal has been immense, especially considering that strong, sincere and unreserved suport was providing for BiH during its most difficult period in modern history.»

Following the official conference opening, Dr. Atanas Kozarev from the European University in Skopje spoke about the Republic of Macedonia’s fight against various forms of criminal activity.  Numerous lectures addressing topics of interest were given by renowned experts from throughout the region including Professor Mirsad Abazović, Professor Dr. Vladimir Obradović, Doc. Dr. Jasmin Ahić, Doc. Dr. Mirsad Nuković, Doc. Dr. Elmedina Muratbegović and others. Ms. Sofradžija (Doc.) highlighted the irresponsibility of political elites as one of the key contributing factors to the current state of existential uncertainty and dissatisfaction.  Dr. Ahić expressed concern about the absence of communication between institutions of  public safety and the private security sector.  The failure to communicate results in an increased degree of uncertainty and an attack on values and structures that have traditionally been protected.

A following issue presented at the conference involved the basic elements of a proactive strategy and adequate response to conventional and unconventional forms of criminality.  A lecture called «Civil Rebellions – Freedom of Expression or a Security Threat» led to an interesting discussion with global implications.  Civil rebellion often becomes an actual security threat, as we have seen via numerous examples around the world.  The trends that can bring this about are present in BiH (veterans’ protests, workers in privatized enterprises, etc.).

The conference allowed for domestic and foreign academics to present scientific findings in the fields of security, criminology and criminal investigation.  Participants exchanged their experiences and examples of best practices in contributing to a safer environment for all citizens.  Their academic, educational and professional comittment is vital for the preservation and development of a secure environment and law-based society.

The 10th Days of Criminology Meetings provided opportunities for the participants to relax and socialize as well.  In addition to academic lectures and presentations, fun physical activities took place.  Students and conference participants played chess and indoor soccer, and even practiced archery.  The students proved quick, agile, ready and accurate and is yet another indication that students at the Faculty of Criminology, Criminal Investigation and Security Studies are ready to cope with the future challenges that their work will bring.