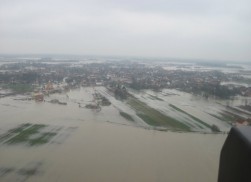 A state of emergency remains in effect in Bijeljina due to the catastrophic floods which hit Semberia on December 4th. Elderly inhabitants of Bijeljina claim that such a damaging flood has not occurred in the past century.

Over a period of only several hours, rising water endangered the municipalities of Janja, Amajlije, Popovo, Dvorovi, Dijelovi, Dazdarevo, Krive Bare and Gojsovac.  High water even reached the settlement of Pet jezera and Komitska Street.

Approximately 2,000 houses were threatened and their inhabitants evacuated.  These individuals found shelter with relatives and friends.  For those unable to locate refuge, the municipality of Bijeljina provided accommodation in the Army Barracks Stepa Stepanović where 150 individuals are currently being housed.

The evacuation of the population was carried out by the civil services, trained divers and members of the Armed Forces of Bosnia and Herzegovina (BiH). One hundred soldiers used boats and other vehicles to both assist in the evacuation processes and deliver food and water.

Vedran Ilić, a resident of Novo naselje in Dvorovi, stated that the situation on the ground is critical.

“Hundreds of houses in the settlement are under water. Water is receding from some areas, but not in others. It is troubling that it is December and winter is only arriving, so even when the water levels decrease, it will be hard to dry the flooded houses,” Ilić explained.

Inhabitants of Semberia are especially worried that the Sava River could spill over. At the moment, the Sava cannot accept the immense amount of water flowing in from the Drina River.  This means that the water levels in the Sava are constantly and drastically increasing.

Mićić believes that members of the civil service, police forces and the Armed Forces of BiH will manage to prevent any new flooding of the Sava, although its dykes are leaking in some places.  He thinks new flooding in the Bijeljina settlements is preventable.

It is now necessary to organize humanitarian initiatives and collect supplies for the evacuated and endangered population of the municipality of Bijeljina. One initiative has been organized by the Youth Center Bijeljina.  This group is collecting food, water, hygienic materials, blankets, shoes and clothes for those who urgently require assistance.