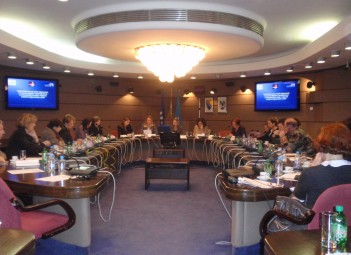 Society must recognize that women should be allowed equal opportunity for participation in security structures. This is the message Atlantic Initiative is sending via a new project implemented in cooperation with the Association “Žene ženama” (Women to Women) from Sarajevo.

The new project, “Let’s Take Care of Our Security: an Evaluation of situational and objective Consultations on Gender and Security Sector Reforms in Bosnia and Herzegovina,” was presented on November 3rd on the premises of the Sarajevo Municipality Administration. “Let’s Take Care of Our Security” was initiated and is financially supported by the Center for the Democratic Control of Armed Forces (DCAF), an organization based in Geneva, Switzerland.  Atlantic Initiative and the Association “Žene ženama” (Women to Women) are serving as joint implementation partners.

In addition to project staff, this promotional event was attended by representatives of the Agency for Gender Equality in Bosnia and Herzegovina (BiH), the Gender Center of the Federation of BiH, the BiH Ministry of Defense, the BiH Ministry of Security, the Federal Police Authority, European Union Police Mission (EUPM), United Nations Development Program (UNDP) and United Nations Development Fund For Women (UNIFEM).

Project activities include gathering relevant information on gender issues in the security sector, analyzing the level of integration of gender issues within discourses in this field and identifying the causes of existing problems. The overarching goal of “Let’s Take Care of Our Security” is to provide useful guidelines which are necessary for the creation of future policies.

Kathrin Quasada, a DCAF representative, noted the importance of gender-related security sector issues in BiH and placed special emphasis on the necessity of security sector reform. Assuring equal treatment in employment, the restructuring of existing structures concerning the need for equal treatment of both sexes and especially the involvement of women in decision-making processes are all of great importance.

“Relying on a research methodology already tested in Serbia, this project, implemented in BiH for the first time, aims at capacity building and strengthening of a planned approach by government structures regarding this issue,” Ms. Quasada stated.

Željka Šulc, Project Manager, noted that six phases of the project are planned.  The project methodology is based on field research, to be conducted throughout BiH, bilateral research and official consultations. The completion of the aforementioned research and preparation of relevant reports is expected by May or June 2011.

The fact that BiH was the first state in the Western Balkans, and the eighth in Europe, to adopt the Action Plan for Implementation of the UN Security Council Resolution 1325 on Women, Peace and Security is deserving of attention. BiH adopted the Action Plan on June 27, 2010.  Majda Čehajić of the Agency for Gender Equality in BiH emphasized that the purpose of Resolution 1325 is the institutional strengthening of the role and contribution of women within conflict resolution processes. Furthermore, the direct involvement of women within operation planning and peace support is envisioned.

Ankica Tomić, Head of the Department for International Cooperation at the BiH Ministry of Security, noted that women are often among the troops which BiH sends to peace missions in hot spots worldwide. Currently, troops from BiH are serving in Liberia, Cyprus and Sudan. Troops have previously been active in East Timor and Haiti.

“125 Police Officers from BiH have been sent to peace missions since 2000, among them 16 women. At the moment, peace missions number 22 individuals from BiH, four of whom are women,” said Tomić.

“Women can have an important, even a crucial role in this process. It is, therefore, of great importance to institutionally strengthen their active involvement in processes of reducing the risk of conflict. The most efficient way to do this is by placing women in decision-making chains,” stated Pendeš.

Memnuna Zvizdić, a representative of the Association “Žene ženama” noted the critical importance of incorporating the planned research within the body of existing experiences, knowledge and information of both state and international organizations working on gender issues.

Those in attendance expressed their full support for the realization of this research and pledged their cooperation.  All agreed that the proposal of an action plan following this research is essential. Research results may then be presented in a unified manner to the appropriate governmental representatives and ministries.