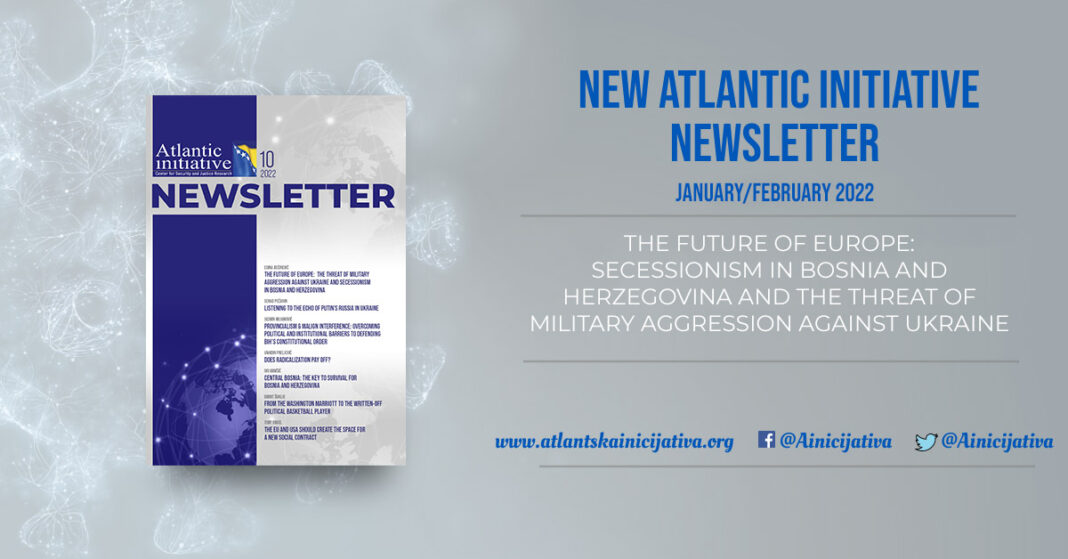 This issue of the Atlantic Initiative Newsletter brings you various analyses and opinions on the political crisis in Bosnia and Herzegovina, and on the increasingly tense situation in Ukraine.

Sarajevo-based lawyer and journalist Senad Pećanin recently traveled to Ukraine and wrote a special piece for this issue while in Kiev. In the context of the turmoil between Western powers and Russia, Pećanin argues that the crisis in Ukraine – as well as the destabilization of Bosnia and Herzegovina – will determine the future of Europe.

Dr. Jasmin Mujanović, a Bosnian political scientist based in the United States, assesses the current political situation in Bosnia and Herzegovina. In what can be read as a kind of political briefing on the secessionist crisis he offers guidelines, reflections and suggestions on what pro-BiH forces can do to halt it, and to prevent similar secessionist scenarios in the future.

Distinguished Germanist, essayist and literary translator Professor Dr. Vahidin Preljević writes about political radicalization in Bosnia and Herzegovina, reflecting on the internal logic and external implications of ethnonationalist   escalation. Meanwhile Bosnian sociologist and politician Professor Dr. Ivo Komšić discusses the Croats of Central Bosnia and their strategic importance for the survival of Bosnia and Herzegovina, given that the political battle over this population continues to this day. Komšić argues that the Croatian Democratic Union party of Bosnia and Herzegovina (HDZ BiH), as well as its mother party the Croatian HDZ, have not given up on so-called ‘Herceg-Bosna’ (an unrecognized parastate that functioned as a separatist entity during the war in Bosnia and Herzegovina from 1993 to 1996). Today the euphemism “Croatian electoral constituency” or “third entity” is used to describe this aspiration.

Slovenian journalist, diplomat, writer and politician Borut Šuklje has written an overview of Milorad Dodik’s political activities and transformation: from being a cooperative politician in whom the US Administration once placed its hopes of a break with the criminal past in the Republika Srpska, to becoming a major destabilizing factor in the current political crisis in Bosnia and Herzegovina.

Finally, from Brussels we have Toby Vogel – a foreign policy analyst who covers the EU’s relations with the Western Balkans and the European Union’s migration policy. Vogel considers the latest escalation of political conditions in our country as a failure of EU policy, and urges the need for a serious revision of that policy towards Bosnia and Herzegovina.

The Newsletter is accessible on this link.