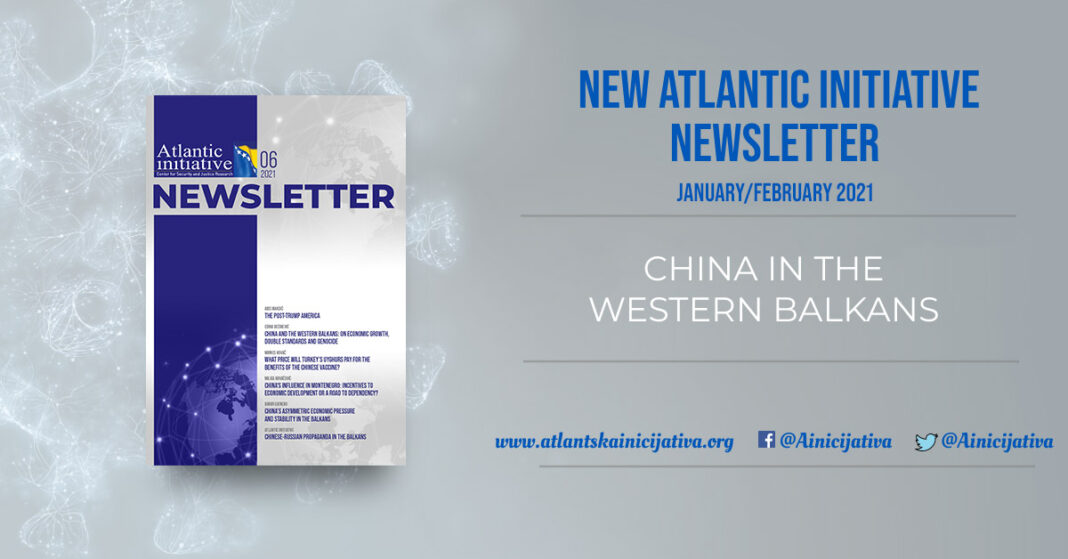 The new issue of the Atlantic Initiative Newsletter is dedicated to China’s influence in the Western Balkans, but also to its geopolitical position in today’s world.

Plus this latest edition deals with the USA after Donald Trump.

Reputable and influential authors write for the Newsletter: Adis Maksić, Associate Professor at the Department of International Relations and European Studies, Burch University; Edina Bećirević, Professor at the Faculty of Criminology, Criminology and Security Studies of the University of Sarajevo;  Mirnes Kovač, journalist, publicist and political analyst from Sarajevo; Milica Kovačević, President of the Center for Democratic Transition (CDT) from Podgorica, and Davor Gjenero, political scientist and political analyst from Croatia.

‘If they want to bring the divided segments of society closer together, Joe Biden’s administration will have to get to grips with the causes of dissatisfaction that have given room for right-wing populism to grow and made tens of millions of Americans give their votes to someone different, even at the cost of breaking away from democratic traditions,’ writes Professor Maksić, who analyzes the events in Washington before and after the inauguration of the 46th US President.

Dealing with China’s position in the world today, and in the Western Balkans in particular, Professor Bećirević draws parallels in her text between the present genocide against the Uyghurs and the genocide against Bosniaks in Bosnia and Herzegovina in the 1990s.

Bećirević questions whether Beijing’s presence in this part of the world is just an “economic story”, as it is often claimed, or whether economic pressure necessarily also brings with it political pressure.

‘For despite the assertion of Bosnian economists that China is motivated solely by economics, it seems the “irresistible charm of authoritarian growth” may seduce many countries to succumb to Chinese political pressure, and even embrace grave violations of human rights,’ she concludes.

Mirnes Kovac analyzes the Turkish-Chinese extradition agreement and its potential impact on the Uyghurs. He also exposes inconsistencies in the policies of the Turkish President Recep Tayyip Erdogan, who has positioned himself as an advocate of vulnerable minority Muslim communities around the world for the past 12 years.

‘What will the cost of the Chinese vaccine be for the Uyghurs?’, this author wonders.

Milica Kovacevic also considers whether China’s presence in Montenegro is a stimulus for development or a path to Montenegrin dependence on China, while Gjenero writes about asymmetric Chinese economic pressure and challenges to stability in the Balkans.

Lastly we analyze Russian-Chinese propaganda in the Balkans, with special reference to the methods of Chinese “soft power” in this part of the world.

The newsletter is available at the link.