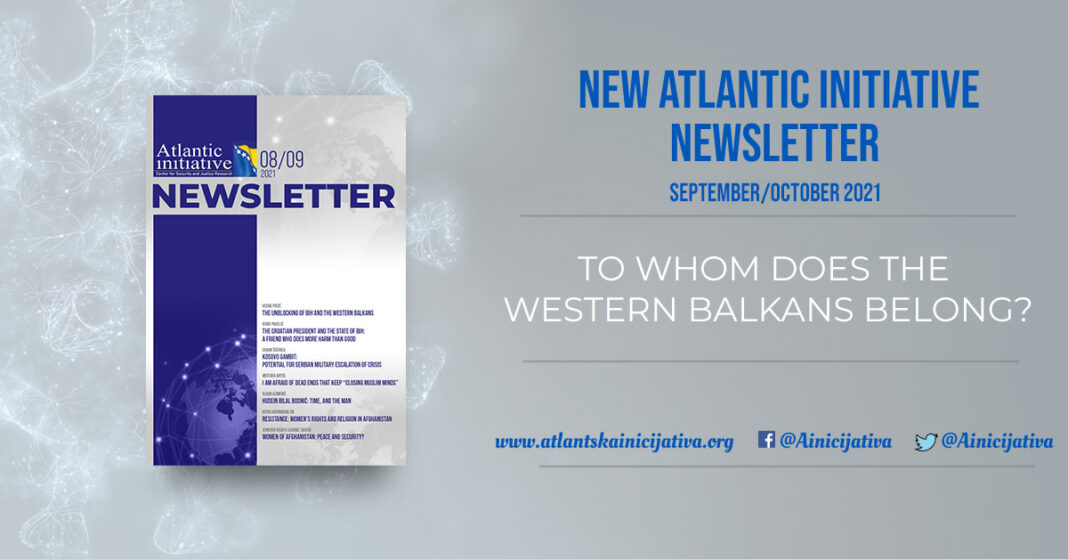 In this issue of the Atlantic Initiative Newsletter, we present a series of current analyses and opinions on the political situation in the Western Balkans, with a special focus on the recent crisis in Bosnia and Herzegovina caused by the systemic blockade of its state institutions.

Instead of an editorial, we publish a text by Vesna Pusić, who writes about contemporary obstacles to the European transformation of Bosnia and Herzegovina and other Western Balkan countries. Pusić focusses on unblocking the progression of Euro-Atlantic processes, and how the EU must find a new modus vivendi with Russia in order to expedite change. Also, in the context of recent crises, Croatian journalist Boris Pavelić writes about relations between Sarajevo and Zagreb. Pavelić pays special attention to the friction between the recent policies of the President of Croatia, Zoran Milanović, and the President of Serbia, Aleksandar Vučić, and how their opposing political rhetorics serve to  strengthen destructive nationalisms in Bosnia and Herzegovina.

The latest tensions in the Western Balkans are analyzed by culturologist and publicist Srđan Šušnica, an expert on Russian politics and its malignant influence in the region, especially in Serbia. Šušnica argues that stability and peace in the Balkans region depend on the determination of the European Union and the United States to prevent disruptive policies in Serbia and the BiH entity of RS (as well as Montenegro and northern Kosovo), through military, economic and political sanctions.

For this issue of the Newsletter, the Atlantic Initiative interviewed the eminent Turkish writer and journalist Mustafa Akyol, who addresses religion and politics in the Muslim world. Amila Buturović spoke with Akyol about his book The Reopening of Muslim Minds, which will soon be published in a Bosnian edition. His book has aroused global attention and great interest, especially because of its call for reform and enlightenment within Islam as a way to solve problems within Muslim societies.

Vlado Azinović writes about the recent release from prison of Husein Bilal Bosnić, who was sentenced by the Court of Bosnia and Herzegovina to seven years in prison for recruiting for and inciting terrorist activities, and organizing terrorist groups. As an expert witness in the Prosecutor’s Office of BiH in the trial, Azinović looks back at the trial itself and the accusations for which Bosnić was convicted, and also provides an analysis of his ideology and possible future activities.

In this issue, we also feature two timely texts on the new situation in Afghanistan after the return to power of the Taliban. Afiya Shehrbano Zia writes about the resistance and struggle of Afghan women against oppression in the context of global feminist debates and criticism of Western interventions in Afghanistan, while also looking at how non-Western feminists have engaged with the situation. Jenifer Heath and Ashraf Zahedi contribute a joint article on the prospects for women in Afghanistan – around education, rights, work and daily life – as Taliban  rule recommences after 20 years of US occupation and the recent withdrawals.

Newsletter is available on this link.