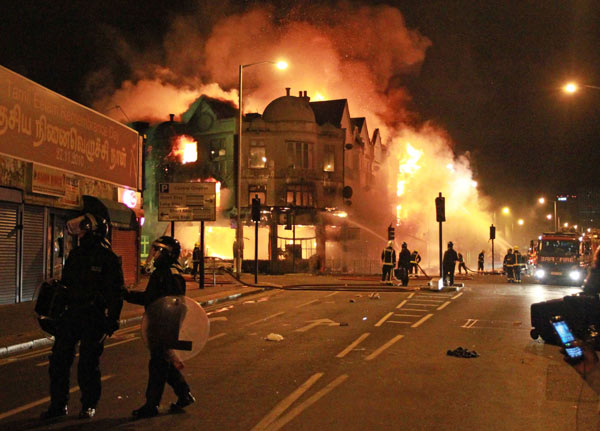 Society’s greatest challenges: the wealth gap and the disconnected youth

Are the recent riots symptomatic of a sick society?

{artsexylightbox}At around 5pm on Friday 5th August friends and relatives of Mark Duggan – a 29 year old black man shot and killed by police the day before- met for a peaceful protest outside Tottenham police station, calling for an inquiry into his death. Duggan had been in possession of an illegal firearm at the time of the shooting, however it appears that -contrary to initial reports- he did not fire on the police. The protest was a peaceful one, calling for justice for Mark and his family; however many of the protesters were angry with many claiming that the shooting was a result of racial targeting and by 8’oclock, frustrated and angry elements from the crowd had begun to throw bottles at two patrol cars, setting one of them alight. What had started out as a peaceful protest about one man’s death became the first of a series of riots which lasted for several days and spread throughout the country, leading to the deaths of at least five more men. Eventually, after three days, up to 16,000 police were deployed on the streets of London and the disturbances came to an abrupt end but not before a huge amount of damage had been done to people, property and the UK’s international image.

As the fires die down and the cleanup operation begins, many seem content to simply assign blame for the events to a thuggish minority of small-minded individuals, convict them and be done with it. Others blame government cuts in social services, education etc. and increased tuition fees, whilst the rest of the country is united in the question “where were the police?”

Whatever the causes, there is no doubt the riots caught the attention of the nation, and indeed the world. Disengaged youths, frustrated with the way they felt discounted and disconnected from society which ignored them, were certainly now being heard. Indeed as one rioter remarked, “you wouldn’t be talking to me now if we didn’t riot, would you?’, when questioned about whether rioting was the best way to express discontent.

But not everyone was as keen to get their message heard; as the protest descended into looting, vandalism and assault, masked, camera-shy youths interviewed by reporters merely mumbled that they were ‘getting their taxes back’, or claimed they were showing the rich they could do what they wanted. Some cited the Conservative-led coalition government as the source of their anger, although were hazy on exactly what –or even who- they opposed. The seemingly apolitical and indiscriminate nature of the riots-which targeted chain and independent stores alike- and the rioters’ apparent inability to put across a coherent explanation for their actions have led many to conclude that these ‘mindless acts of violence’ need not warrant further investigation. London mayor Boris Johnson, for example, labelled the riots as “nothing more than wanton criminality”.

However, this over-simplifies the issue. We cannot just pretend that this sprang up ex nihilo. The situation is simply not as straightforward as it may appear on the surface. The real reason (or reasons) behind the riots is – much like the demographic of the rioters- neither white nor black. They cannot be simply condemned as “scum” neither can they be excused as “victims of discriminatory social exclusion.” As, both Labour Leader Ed Milliband and Harriet Harman have recognised, there is a ‘complex number of causes’ behind the riots. At the heart of the problem lie two main issues: the ever-widening gap between rich and poor and youth unemployment. There is now a gap of 7.2 years in male life expectancy between the most and least deprived areas of London. Moreover, there is something fundamentally wrong with society in which large numbers of people feel able to destroy property, mug people, loot stores and wreck havoc on communities without remorse or fear of recrimination. Evidently something is not working when young people feel so little invested in their community that they derive pleasure and a perverse sense of power by breaking the law.

There is no doubt that the riots depict “some of the worst behaviour this country has ever seen” and people are right to condemn the actions of the rioters, – yet condemnation only goes so far. A statement released by UNISON – UK’s largest public service union- on Tuesday 9th August reiterated this point; “Clearly we don’t support opportunistic looting or acts of random violence. However, if we are to avoid a return to the social unrest and public disorder seen in the 1980s, this demands a response from our community and its leaders which goes beyond mere condemnation”.

Indeed, by dismissing it as mindless violence society risks exacerbating a problem that will not go away by simply burying our heads in the sand. Obviously, looting and stealing are criminal acts, but the underlying reasons must be identified and addressed if repeat occurrences are to be prevented. Shaun Bailey, a local youth worker, ‘this problem is in our community, this problem is in our economy. What are our young people going to do for a job? What are our communities going to do to control the behaviour of our young people …. we have lost control of our young people, and that is our responsibility, not the politicians.’

Clearly, there are hugely diverging views about why the riots happened, and indeed what – if anything – should be changed in their aftermath. Many seek to dismiss the riots as criminal actions and nothing more, seeing harsh punishment as the only necessary response. Others seek to place the blame on “society” and point to a disenfranchised youth. But looking at why the riots happened should not be confused with excusing them; in fact it is only by addressing the underlying causes – whether disconnection from society or a breakdown in the social contract – that a repeat performance can be avoided.