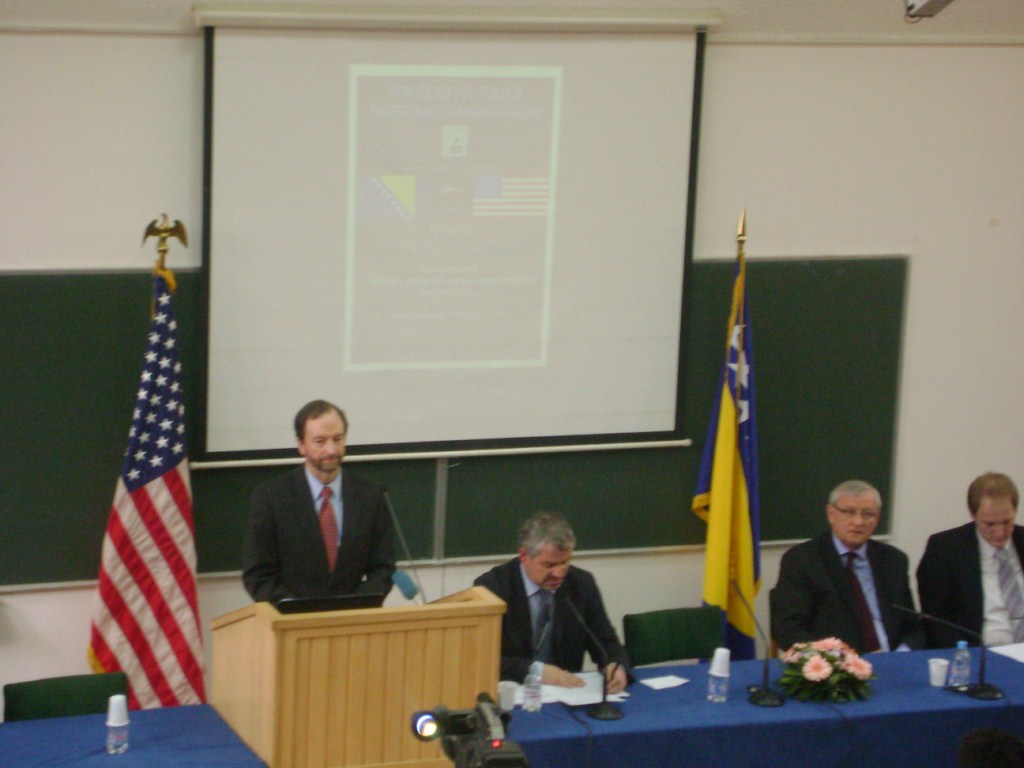 The Faculty of Political Sciences of the University in Sarajevo, in cooperation with newly founded Association of Politologists in BiH, organized a lecture of Ambassador of the United States to Bosnia and Herzegovina, Patrick S. Moon. Topic of the lecture was: „The USA and BiH: achievements and deadlocks in the process of integration of BiH into the EU and NATO“. Coincidence or not, on this very day (7 April) nineteen years ago, the United States of America recognized Bosnia and Herzegovina as an independent state.

Dean of the Faculty of Political Sciences in Sarajevo, Professor Pejanović, said that former US ambassadors to BiH, His Excellency Clifford Bond and His Excellency Charles English had had an opportunity to speak in the very same amphitheater of the Faculty of Political Sciences, so these lectures now represented a sort of a tradition and continuous cooperation of the Faculty and the USA Embassy in BiH. Professor Pejanović believes that involvement of the USA is of crucial importance in full implementation of integration processes of Bosnia and Herzegovina. „The US has an immeasurable role in achieving peace and stability in BiH, and is of great help in building the state of BiH and its institutions. Prosperity and stability are Bosnia and Herzegovina’s goals and they can be reached only if efforts are intensified in the area of EU and NATO integration processes“, Professor Pejanović says.

He is disappointed by the fact that the international community has to be engaged and that its help is necessary in order for some decisions in BiH to be reached. „We support the recent OHR’s decision on adoption of a temporary budget, because this is in the best interest of BiH citizens, and the US has always opted for citizens and their prosperity. Local politicians do nothing to solve crises, so we provide our assistance to the OHR. But this is not sustainable long-term. Political elites in this country have to start cooperating. It’s time for Bosnia and Herzegovina to start making its own decisions“, Moon says.

Bosnia and Herzegovina is in stalemate position. Six months after elections it still does not have government, which has halted all reforms and presents a setback in integration processes. Bosnia and Herzegovina has to carry out census, solve the issue of military property and deal with the European Court’s decision in the Sejdić-Finci case. Economic reforms have to be conducted in order for the overall climate to be improved, which would bring new investors to the country. „Bosnia and Herzegovina has just embarked on its journey towards the EU and NATO. A lot of reforms and work will be necessary for BiH to have objective chances to join these organizations. Political leaders need to be dedicated to their work in order for BiH to become a modern, reformed and functional state. The USA cannot help BiH without a proper partnership. BiH leaders are wasting their time on problems and issues dividing Bosnia and Herzegovina, and this rhetoric is unconstitutional and utterly dangerous“, Moon claims.

What BiH citizens need now is the establishing of trust. „Trust is best built when majority helps solve problems of minority. I am hereby encouraging and challenging you, young people, to do everything to build that trust, offer a hand of friendship, establish good neighborly relations and a brighter, shared future. I hope that in a few decades historians will mention Bosnia and Herzegovina as a positive example, a country that had been destroyed, but gathered strength and became modern and prosperous“. With these words, Ambassador Moon ended his lecture at the Faculty of Political Sciences.

We, citizens of BiH, can do nothing but really start building trust among ourselves or we will have to listen to a similar lecture in four years at this very place, in the Faculty’s amphitheater, in line with the established tradition.