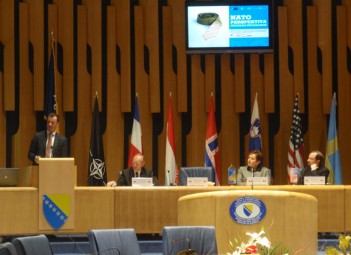 The primary financial backing for a new cycle of the NATO Trust Fund was provided by Norway, the Netherlands and Slovenia. Additional contributions were made by Sweden, Luxembourg, Bosnia and Herzegovina (BiH), the United Kingdom, the US and Turkey.   Via the fund’s renewal, a severance package will be offered to almost 3,000 BiH Armed Forces soldiers recently pronounced redundant in line with current legal regulations.

The program “NATO Prospects for BiH” was presented at the BiH Parliamentary Assembly headquarters in Sarajevo, BiH on November 18, 2010. The program’s main goal is the material strengthening of BiH’s defense sector reform. This new cycle of the program represents an extension of the trust fund, following a successful prior cycle completed during the second half of 2009.

Over 10 million BAM has been allocated for the reintegration into society of approximately 3,000 soldiers who can no longer serve in the military due to legal regulations. The current age limit for active soldiers is thirty-five years.

“The presentation of this program is an important event for BiH. It shows clearly that this country has 28 friends in NATO who are ready to help it in its reforms,” said Ambassador Jan Braathu of the Kingdom of Norway.

Assistance for the laid-off staff of the Armed Forces of BiH will come in the form of one-to-one counseling, training, reorientation, additional education and the purchase of equipment for employment or self-employment.

“The project we are implementing is based on models being used in countries in the region, but elsewhere in the world as well. With this model, we would like to provide efficient and complete reintegration into civil life for the laid-off members of the Armed Forces of BiH. Through individualized support, we want to find the best support models which will bring benefit to both the laid-off soldiers’ families and the local communities they live and work in,” said Rocco Gianluca, a representative of the International Organization for Migration (IOM). The IOM is responsible for the project’s implementation.

“BiH has an important status among European countries. I am very happy because this project reflects our support and because its implementation will contribute to the building of this country,” said the State Secretary of the Norwegian Ministry of Defense Roger Ingebrigtsen.

“We remain strongly dedicated to the processes of strengthening peace, stability and the future of this country. The program NATO PROSPECTS for BiH is an activity which clearly shows this,” stated Ambassador Patrick Moon of the United States of America.

BiH Deputy Minister of Defense Marina Pendeš expressed her gratitude for the funding and overall support NATO members are giving to the country.

Norway, the Netherlands and Slovenia have made particularly generous financial contributions, while the funding providing by Sweden, Luxembourg and BiH is also of note. In total, 3,421,658 Euro was approved for the trust fund at an October 1, 2010 ceremony held at the NATO headquarters in Brussels. Additional funds have been collected through agreements between IOM and USAID (2,113,600 Dollars) and the United Kingdom (100,000 Pounds). The Ambassador of Turkey to BiH, Vefahan Ocak, confirmed that the Turkish government has allocated 200,000 Euro for this project.