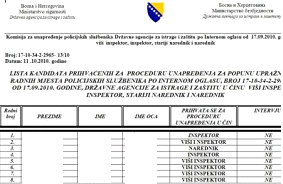 On October 20th, the State Investigation and Protection Agency (SIPA) posted the names of 75 officers who were promoted to the ranks of senior inspector, inspector, senior sergeant and sergeant on their official website.

The promotions occurred as a result of internal vacancies and in no way necessitated that the names of these 75 intelligence officers be released to the general public via the Agency’s official website.  Professionals from this sector have unofficially commented that this scandalous move threatens the safety of the officers and compromises the continuation of the investigations in which they are involved.

In response, SIPA officials offered a naïve explanation.  In the Agency’s interpretation, these 75 individuals are not spies, but rather police officers.  As the Agency is a public institution, it is obligated to respect transparency norms regarding the promotion of personnel.

In this case, transparent procedural standards collide with the need to provide safety for the officers and their investigations.

Željka Kujundžija, SIPA spokesperson, explained that the Agency was required to publicize its vacancies and provide transparency at all stages of the hiring process.  Furthermore, all candidates then had unrestricted access to the application results.

“What is important is that we make our job vacancies public and the selection process transparent. SIPA is not a secret service, so releasing the names of these police officers was not a mistake, but our obligation,” Kujundžija stated, reiterating once again that these officers are not spies.

Conversely, the institutions charged with monitoring the security sector in BiH consider the release of these names to be inconsistent with the rules and procedures commonly used.

The Head of the Joint Committee for Defense and Security, Branko Zrno, questioned whether this is the correct way for a modern security agency to function.  According to Zrno, the practice thus far has been to maintain confidentiality.  Additionally, Zrno expressed concern about the case’s background.

However, individuals in positions of authority who are obligated to explain to the public why this has happened and who is responsible remain silent.  Mirko Lujić, SIPA Director, Marko Dominković, Deputy Director, Anđelko Hrgić, Assistant Director of the Criminal Investigation Department and Mirza Lišinović, Assistant Director of the Internal Control Department, have not issued any statements related to the scandalous release of the 75 names.

There is no doubt that the release of the names was a mistake, and some would even argue that it was a deliberate mistake.  This was confirmed by the prompt removal of the list from SIPA’s website.