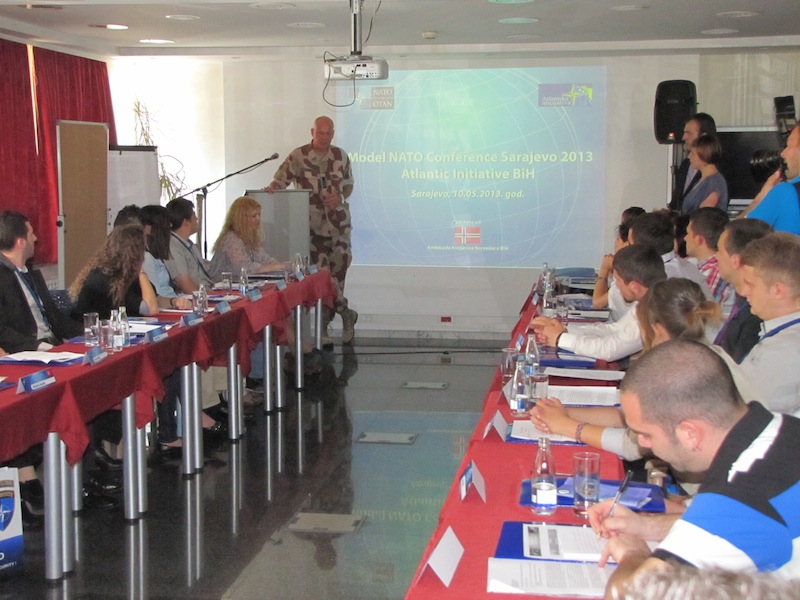 With the support of the Royal Norwegian Embassy in Bosnia and Herzegovina, the Atlantic Initiative organized the first Model NATO Conference for students, in Sarajevo on May 10, 2013.

The aim of the conference was that participating students develop an understanding of the functions and decision-making processes of NATO through a simulation of the North Atlantic Council. The activity gathered 35 students from across Bosnia and Herzegovina, from the University of Sarajevo and the University of Mostar, studying political science, international relations, and security and peace studies. Students represented the member countries of the Alliance and discussed the aspirations of the Western Balkans region for NATO membership.

At the beginning of the conference, participants were addressed by the Deputy Commander of NATO Headquarters in BiH, Colonel Harold Hiorth; Secretary General of the Atlantic Initiative, Professor Vlado Azinović; and the Project Manager of the Model NATO Conference, Sead Turčalo. Besides acquainting students with the functions of NATO processes, Azinović stressed that the purpose of the project was to help students understand the importance of accepting and respecting the opinions of others. With differing legitimate interests, it is important to build consensus, a basic characteristic of NATO decision-making. General Hiorth applauded the event, highlighting the particular importance of young academics in Bosnia and Herzegovina becoming familiar with the work of the Alliance, since they will be the future representatives of their country.

After these opening remarks, students who represented Bosnia and Herzegovina, Montenegro, and Macedonia heard detailed reports on the progress of their countries as well as on problems encountered in the process of meeting requirements for NATO membership. Following this discussion, students representing each member state of the Alliance offered their views on these reports, and through a series of questions gained insight on the current political situation in the three Western Balkans countries.

An informal meeting followed this formal discussion, giving students time to work together on the communiqué of the Council, which was adopted at the end of the simulation.

Participants agreed that the Conference was a success. On May 31, the Atlantic