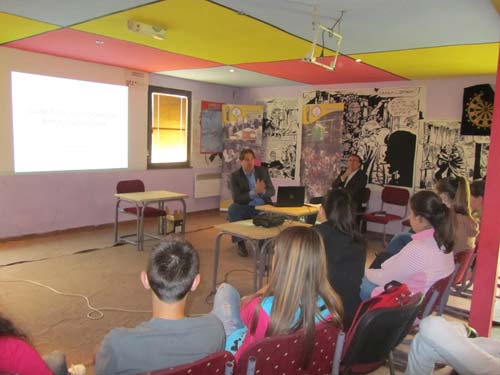 With the support of local partners, the Atlantic Initiative held interactive workshops with students on the topic of Euro-Atlantic integration, on May 28 and 29, 2013 in the municipalities of Bratunac, Srebrenica, Milići, and Vlasenica. The purpose of the workshops was to promote the principles and values of European integration, as well as for students to gain a better understanding of the integration process. The aim was to raise their awareness regarding various aspects of integration as it relates to ensuring the economic and political security of Bosnia and Herzegovina.

The introduction was presented by Igor Pilić, consultant to the Deputy Minister of Foreign Affairs, who offered the students a theoretical foundation, discussing “BiH and NATO Terms and Concepts.” Goran Pranjić, an advisor in the Ministry of Foreign Affairs, followed on these concepts, presenting “The Benefits of NATO Membership for BiH and its Citizens.” The second, interactive part of the workshop was led by Aleksandra Taševski, Executive Director of the Centre for Socio-Ecological Development.

Igor Pilić repeatedly stressed that all decisions in NATO much be reached by consensus. Goran Pranjić pointed out that an increase in the standard of living would be a direct benefit of BiH NATO membership. He emphasized that “joining NATO will improve the overall security situation in BiH, which will among other things, help in reducing the risk of political turmoil within the country. This diminishing risk will have a positive impact on the intensification of economic activity within BiH and will benefit efforts to attract foreign direct investment. This in turn will result in higher employment, investments, an increase in exports, a reduction in interest rates, etc., which will ultimately lead to a higher standard of living for the citizens of Bosnia and Herzegovina.”

In the interactive session, led by Aleksandra Taševski, participants were divided into three different groups – public interest, the commercial sector, and the civil sector – representing the current perspectives of citizens in Bosnia and Herzegovina. They then looked at the comprehensiveness of the integration process, and using the perspective of their group, identified the potential risks and benefits of BiH integration into NATO.

Workshop participants in Bratunac expressed satisfaction with their participation, saying it was the first time they had ever reflected on this topic. Most participants pointed out that they had certain stereotypes and prejudices upon arrival to the workshop, but that they left with minimal prejudices. Čedomir Glavaš from Bratunac expressed that it is necessary to discuss these issues and suggested that the organizers establish these kinds of meetings as often as possible, so that not just young people, but other BiH citizens, can become familiar with the topic.

Hasudin Mustafić in Srebrenica maintained that the interests of our politics and politicians should be primarily directed toward maintaining peace and security. In Milići, Tijana Sušić said that NATO membership would reduce poverty and create jobs as a result of the increase of foreign investments in the country. And in Vlasenica, Bojan Kovačević pointed out that the civil sector in BiH has an important role in promoting the integration process and in informing BiH citizens.

Notably, the participants’ presentations at the end of each workshop were very comprehensive and positive, recommending that the accession process to NATO be accelerated and that politicians must limit the negative impact they have had on this process. The conclusion drawn after these presentations in all four municipalities is that all three sectors have an important role in the process of Euro-Atlantic integration.