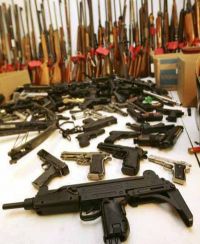 Dedicated industry represents the most profitable branch of industry – was the conclusion reached at the round table “State and Directions of Development of Dedicated Manufacture in BiH”, held on December BiH Chamber of Commerce in Sarajevo.

The present state and the tendency of permanent weakening of this important branch of industry require urgent activities focused on stopping the negative trend in this branch of industry, followed by creation of conditions for its revitalization and possible further development, concluded the round table participants.

“The biggest producers and exporters of weapons in the world mark high employment rate and profitability”, said Zijad Fazlagić, chairman of the Dedicated Manufacture Group within the BiH Chamber of Commerce. According to his words, military industry used to employ 40,000 people, but numbers only 2,500 employees nowadays.

Creating adequate conditions for export, these dedicated industry plants could also take share of this market. Talking about situation these firms are in today, Fazlagić said capacities had not been lost, but that in many cases bank accounts of these firms had been blocked.

Secretary of Dedicated Manufacture Group at VTKBiH. Emin Bajramović, emphasized that the level of used capacities in dedicated industry was only 10 percent, and that this percentage was much higher in neighboring countries. This branch of industry does not participate significantly in overall export from BiH, but it still holds one of the first positions when it comes to export quality and positive balance of export compared to import.

In past ten months, Bajramović added, this industry’s export has been five times the import, and this ratio can be improved further through minor interventions.

Bajramović said around BAM 30 million had been exported, and that around 5,000 people had been employed in this industry.

BiH Minister of Defense, Selmo Cikotić, said this ministry had no direct liability over dedicated industry, but it could offer experiences which could be of use, adding it was important that state institutions recognize their role in this, since dedicated industry is not active at free market.

According to him, all BiH institutions – Parliament, executive government, and industry have to put joint effort into creating perspective for further development of this branch of industry, and today’s round table, which has gathered entrepreneurs and representatives of competent institutions, should open the question of what needs to be done in order for dedicated industry in BiH to reach a higher level of development.