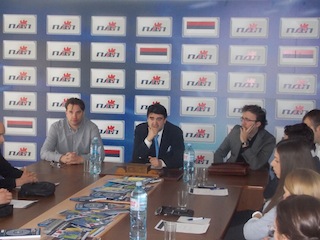 The Atlantic Initiative, in cooperation with the Commission for the NATO Integration Process of the BiH Council of Ministers, and with support from NATO Headquarters in BiH, organized a series of interactive seminars entitled “Bosnia and Herzegovina’s Accession to NATO: Chances and Opportunities.” Seminar participants were civil servants from the BiH Ministries of Foreign Affairs, Defense, and Security.

The goal of these seminars was to introduce the concept of NATO, the benefits of membership, and the current state of the integration process. Prof. Dr. Nerzuk Ćurak, President of the Atlantic Initiative and Professor at the Faculty of Political Science of the University of Sarajevo, spoke about the geostrategic position of BiH and the regional and global impacts of the integration process on the country.

Igor Pilić, an Advisor in the office of the BiH Deputy Minister of Foreign Affairs, introduced information about the historical development of the Alliance and the driving concepts of the organization.

Goran Pranjić, also an Advisor at the Ministry of Foreign Affairs, spoke to seminar participants about the concrete political, economic, and security effects of NATO membership.

These seminars are part of the “NATO Campaign for Raising Public Awareness,” which is financed by the Royal Norwegian Embassy in BiH.

The Atlantic Initiative in Bratunac, Srebrenica, Milići, and Vlasenica – Interactive Workshops on the Topic of Euro-Atlantic Integration