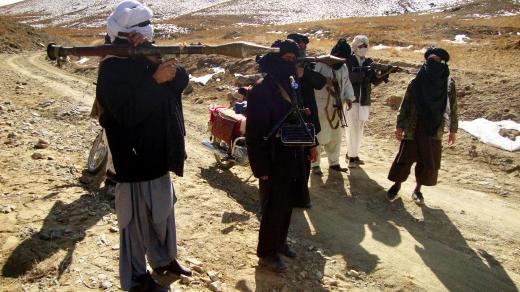 When Washington starts withdrawing its troops from Afghanistan in July 2011, its NATO allies in Europe will quickly rush to the exits. A power-sharing arrangement between Kabul and the Taliban is a less than ideal solution, but it is the only realistic option if the West pulls out.

No matter how many times President Barack Obama and his senior officials tell the world that the Americans will not be pulling out of Afghanistan in just 13 months time, most Afghans believe that the US endgame is already well under way. The same is true for governments of neighboring countries known for their interference and influence-seeking in the Hindu Kush.

That means everyone from Afghan warlords to Taliban and al-Qaida commanders to intelligence agencies in neighboring states have upped their game to undercut rivals, achieve their aims and further their influence. The danger is that Afghanistan will once again become, in the words of Lord Curzon, the 19th century British imperial figure, “the cockpit of Asia.”

Obama himself gave the game away when he said last December that even though 30,000 more US troops would be deployed to Afghanistan this year in a large military and civilian surge to drive back the Taliban, by July 2011 US forces will start withdrawing from the country and handing it over to the Afghans. By this October there will be 100,000 US and more than 40,000 other troops — mainly from other NATO countries in Afghanistan — and by next July they will start withdrawing.

More than $25 billion has been poured into efforts to rebuild the Afghan army and police, but they are still largely illiterate, undertrained and irresponsible and nowhere near ready to take over nation-building tasks. Of the 5,200 Western military trainers that the US and NATO agreed were needed to mentor Afghan forces, only half have been deployed. And despite numerous promises, only 300 of those are Europeans.

For Afghans and powerful neighbors such as Pakistan, India and Iran, it is abundantly clear that the first American soldier to leave will be followed with a rush to the exit by European NATO countries, where the war has lost legitimacy and popularity. The Dutch have already declared their intentions to leave the critical southern province of Uruzghan this summer, the Canadians will leave Kandahar province next year followed possibly by the Danes. And the British have been asked by the Americans to leave Helmand province and redeploy to Kandahar.

Obama’s surge was a well-considered notion except for the self-imposed time frame that has frustrated US commanders. On a positive note, the surge coincided with a new counterinsurgency strategy now embraced by NATO that puts an emphasis on protecting the people and pushing forward with development rather than killing insurgents. But that, too, requires time and not a 12-month deadline.

The US first applied its new military strategy in Marja, a small town in southern Helmand and center of the drugs trade. And yet the 15,000 Western and Afghan forces have still been unable to prevent the Taliban from returning to the town at night to lay mines in the roads, intimidate the population and prevent an Afghan administration from running the city.

Now US and NATO forces plan to launch the biggest offensive of the war this summer when over 20,000 troops will deploy to clear Kandahar city and adjoining Taliban-controlled districts before handing security over to Afghan forces. US General David Petraeus warned the population of Kandahar on a visit there on April 30 that the Taliban would retaliate and take ”horrific actions” to disrupt the US-led offensive. The Taliban have since launched a wave of assassinations in broad daylight in the city, killing a dozen top Afghan officials including the deputy mayor of the city.

There are three ongoing crises that the international community has still failed to square up to. The first is the lack of a consistent Afghan partner. A new Pentagon report to the US Congress states that only 29 out of 121 key districts support President Hamid Karzai. Most Afghans are still sitting on the fence. Recent US pressure on Karzai to improve governance in Afghanistan and eliminate corruption continues to fall on deaf ears.

For the past nine years, American governments have been naive and inconsistent in their dealings with Karzai. During that time, the Afghan president has never considered good governance to be a serious issue — why should he suddenly be expected to do so now? Meanwhile, the lack of trust between Karzai and the Americans has grown. The US first accused Karzai of rigging last year’s presidential elections, then accepted the results only to fight with him again over governance issues, finally making up with Karzai so he could conduct an all important visit to Washington the week before last.

The second problem is that even if the US maintains a troop presence in Afghanistan for another five years, as it is likely to do, the Europeans will certainly decline to do so. According to recent polls, 72 percent of Britons want their troops out of Afghanistan immediately, as do 62 percent of Germans. Polling across Europe — from Spain to Sweden — shows that over 50 percent of Europeans have had enough and want their troops to come home.

Thus Afghanistan’s immediate crisis is also in the corridors of NATO in Brussels and European capitals because no European government can afford to sustain a foreign policy that is so deeply unpopular at home and costs so much in terms of blood and treasure for very long. So it was not surprising to see US and European leaders agree at the April 23 NATO meeting in Tallinn to start transferring control of some provinces of Afghanistan back to the Afghan government by the end of this year. NATO Secretary General Anders Fogh Rasmussen’s statement that ”increasingly this year the momentum will be ours” seemed overly optimistic and hollow. Many Afghans would call such a move a retreat rather than an advance.

Part 2: Germany Has Its Head Stuck in the Sand

Germany has deployed 4,500 troops in northern Afghanistan and Kunduz, but when it comes to explaining its strategy, intentions or aims to its citizens, the country’s head has been stuck in the sand — even more so than most other European nations. The degree of subterfuge pursued by Berlin in front of its own people has been remarkable.

Chancellor Angela Merkel herself has shown little interest in Afghanistan or Germany’s deployment there and only recently attended her first funeral for a fallen German soldier. Soon, roughly 5,000 US troops will be deployed in the north to support the Germans in launching a major offensive to drive out the Taliban.

The third problem is that the Afghan Taliban and other extremist groups are still able to find sanctuary in Pakistan. The Pakistan military allowed the Taliban and its allies to relaunch their campaign against US forces in 2003. Bush ignored the issue as long as Pakistan went after al-Qaida, which the military did. Obama has pushed Pakistan harder with both carrots and sticks, but Pakistan insists on keeping the Afghan Taliban option open because of its perceived but exagerrated threat from India, which has strengthened its influence in Kabul. Now, with the US intent to withdraw and Pakistan a key player in the end game for influence in Kabul, the military sees it as all the more important to keep the Afghan Taliban in reserve as a proxy force for pursuing the army’s interests in Kabul.

In the meantime, Pakistan’s army also allowed the growth of the Pakistani Taliban — Pakistani Pashtun tribesmen who originally appeared as helping hands for the Afghan Taliban and al-Qaida in the tribal areas. Since 2007, the Pakistani Taliban has emerged as a challenge to the state that is wreaking havoc with suicide attacks across Pakistan. Late last year, the army began to pursue Pakistani Taliban, but it has only done so in six of the seven tribal agencies. The army refuses to enter the seventh agency, North Waziristan or deploy further south in the border region of Balochistan where the Taliban and their allies, like Jalaluddin Haqqani and Gulbuddin Hekmatyar, operate from.

With its obsession with India, the army also refuses to go after Punjabi extremist groups who have been used in the past by the military to fight Indian troops in Kashmir. Lying idle for several years, these groups have not been disarmed and many of their fighters are now fighting for the Pakistani Taliban or have bases in the tribal areas.

Al-Qaida and a number of Central Asian groups also have training camps in North Waziristan. These include half a dozen would-be bombers of various nationalities, who have tried to attack the American mainland, as well as several dozen German militants. The latest case of Faisal Shahzad, a Pakistani-born American citizen who tried to explode a car bomb in Times Square in New York, has finally riled up the Obama administration sufficiently to demand that Pakistan take action in North Waziristan. Pakistan is now under serious pressure to do something, but the army has so far never been forced to do anything it considers to be counter to its strategic interest.

The Tug-of-War over Afghanistan

Obama’s promise last year to bring the region together in a kind of pact that would prevent neighboring countries from interfering in Afghanistan has gotten nowhere. Relations between the US and Iran and between India and Pakistan are worse than they have ever been. Afghanistan’s six direct neighbors — Iran, Pakistan, China, Uzbekistan, Tajikistan and Turkmenistan — and its near neighbors India, Russia and Saudi Arabia all want a degree of influence in a post-US Afghanistan. It is Pakistan, however, which holds most of the cards with its grip on the Afghan Taliban leadership.

With the West tiring nine years after Sept. 11, Afghanistan and Pakistan will continue to deteriorate until there is an acceptance by the US, NATO and all the neighboring states to support negotiations between the Afghan government and the Taliban. Karzai is keen to gain international support for such talks, which he has already secretly continued for nearly a year in venues such as Dubai and Saudi Arabia. The Taliban have privately said they want to talk directly to the Americans and NATO.

The US demands that the Taliban must cut off all ties with al-Qaida and militarily be beaten into a state of submission before such talks begin are looking more and more impossible to achieve. Other insurgencies have ended by talking and fighting at the same time. But the conditions the West would like to impose on the Taliban can only be done through dialogue. Sharing power with the Taliban is not the best of solutions, especially for the Afghan people, but it is the only realistic option if the West starts withdrawing its troops and Afghanistan remains a weak and fractured nation with rapacious neighbors.

Pakistani journalist and book author Ahmed Rashid is one of the most knowledgeable experts on the region. He wrote a world-renowned book about the Taliban and recently published “Descent Into Chaos: How the war against Islamic extremism is being lost in Pakistan, Afghanistan and Central Asia.”