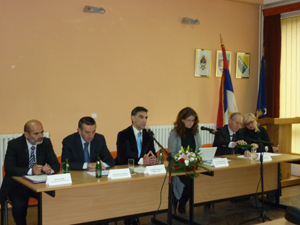 The development of effective institutions for fighting terrorism and organized crime is not only improving security in BiH, but throughout South Eastern Europe.  As BiH makes necessary reforms bringing it ever closer to integration in Euro-Atlantic institutions, the climate for foreign investment and economic development improves.  These were several of the conclusions from the round table “European Security in BiH,” held on Octber 26th in Foča.  The round table was organized by Atlantic Initiative and the Embassy of the Kingdom of Norway.  Mr. Zdravko Krsmanović, Mayor of Foča, opened the round table and noted his surprise concerning both the number of participants and level of interest about these topics in Foča.

Mr. Krsmanović’s impression is that individuals are adopting a rational approach to security issues in the region.

Looking Towards the Future

{gallery}foca/1{/gallery}The Ambassador of the Kingdom of Norway to BiH, Mr. Jan Braathu, has been particularly instrumental in
supporting BiH’s cooperation with Euro-Atlantic institutions.  Ambassador Braathu encouraged citizens of BiH not to base their impressions on the NATO of the 1990s, but rather on the organization’s role today and its potential future impact on BiH.   He emphasized that both Norway and BiH are small countries in Europe which nonetheless have important and divergent geostrategic significance and historical experiences.

“We can take care of our security best when we do it in cooperation with others. If we want to have any influence, we need to be a part of a team, and if we are not, we are standing in front of the doors exerting no influence, instead of sitting at the table,” Ambassador Braathu said. He added that security is a much more complex concept today than it was in the past.  In Ambassador Braathu’s view, neutrality is no longer a solution.

Ambassador Fuad Šabeta, Head of the Peace and Security Department at the BiH Ministry of Foreign Affairs, addressed the round table participants.  Ambassador Šabeta’s remarks focused on the prominence of global integration processes within economic, military, political and cultural spheres.  Additionally, Ambassador Šabeta pointed out that global security is seriously threatened by the actions of terrorist organizations, weapons of mass destruction, trafficking, narcotics and weapons smuggling, and disease.

“BiH and all countries in the region are countries in transition and represent a fertile ground for organized crime. And there is a thin line between organized crime and terrorism,” Ambassador Šabeta said. He emphasized the importance of regional cooperation in maintaining security.  According to Ambassador Šabeta, the globalized nature of modern security means that no country in the world can assure its security alone.

Onc security issue of particular importance in the region is arms control.  Mr. Momir Brajić, Head of the NATO and Partnership for Peace Department within the BiH Ministry of Foreign Affairs, presented this security challenge in detail.  Mr. Brajić noted Annex 1B, Article 4 of the Dayton Peace Agreement which defines arms control in BiH.

“[The] Agreement on Arms Control has brought stability and balance to the region.  It enabled us to reduce our arms levels within 16 months and maintain levels within accepted limits.  All countries in the region have suffered financial losses because of this, but the gain is much greater.  Good cooperation and trust have been established, so there is no longer a need for international control,” Brajić stated.

Dr. Edina Bećirević, President of Atlantic Initiative and a co-organizer of the round table, said that the purpose of such gatherings is to hear what BiH’s citizens think about joining NATO.

“A large number of participants, quick-paced and constructive discussion, and the dissemination of useful information from experts confirm that these types of meetings are very useful,”  Bećirević said.

Foča’s population remains divided over whether BiH should join NATO as a full member.  Most questions posed to experts at the round table pertained to decision-making processes within the organization.  Ambassador Braathu explained the exclusive use of consensus in reaching decisions and noted that this method allows for countries to protect their individual interests.